I didn’t always love teaching grammar.  That’s not to say I hated it.  Personally, I remember being one of the few who could make sense of sentence diagramming back in my own middle school years.  But having a sense of something does not necessarily equate to being able to pass that on to others – especially those whose eyelids and shoulders drop at the mention of the word “grammar”.  These days I love teaching it  … using the 4 Level Sentence Analysis that I learned about from Michael Clay Thompson.

Using a 4 Level Analysis of a sentence allows for my students to think through their decisions, to defend their choices and to create their own sense of understanding.  There is definitely some groundwork that needs to be laid before the analysis can begin.  The first thing we do at the beginning of the year is to review the eight parts of speech and the five parts of a sentence.  Then as we begin analyzing sentences, we add discussion about phrases, sentence structure, and sentence types.

We begin by having a group of volunteers label the part of speech for each word in the sentence on the board.  The students in the class are then expected to look at the labels and to question them when they don’t seem to fit with what he or she understands.  These questions often lead to rich discussions on the role of each part of speech, the relationships of the parts of speech to one another and the idea represented in the sentence as a whole.

In the sentence we analyzed on Friday, the students had two opportunities to contemplate the idea that often words can be more than one part of speech, depending on how they are used in the sentence.  So while we may appear to be looking at the sentence one word at a time, we are always keeping the idea represented by the sentence in mind.

The first word questioned was ‘so’.  Many of the students recognize it as a coordinating conjunction.  That great question allowed us to revisit the role of a coordinating conjunction.  It also allowed us to think about how the word was being used in the sentence.  When the students thought about it in relation to the other words around it, it became obvious that in this particular sentence the word was an adverb.  The second word questioned was ‘student’.  Most of the time it is thought of as a noun.  I especially loved the way Elizabeth recognized that it can be a noun … sometimes.  Again, we need to look at it in the context of the sentence!

Looking back at the video, I realize that you can only see part of the two magnet charts I refer to at the top of my white board.  The first one lays out the parts of the sentence in a visual way.  Here is a better picture of it: 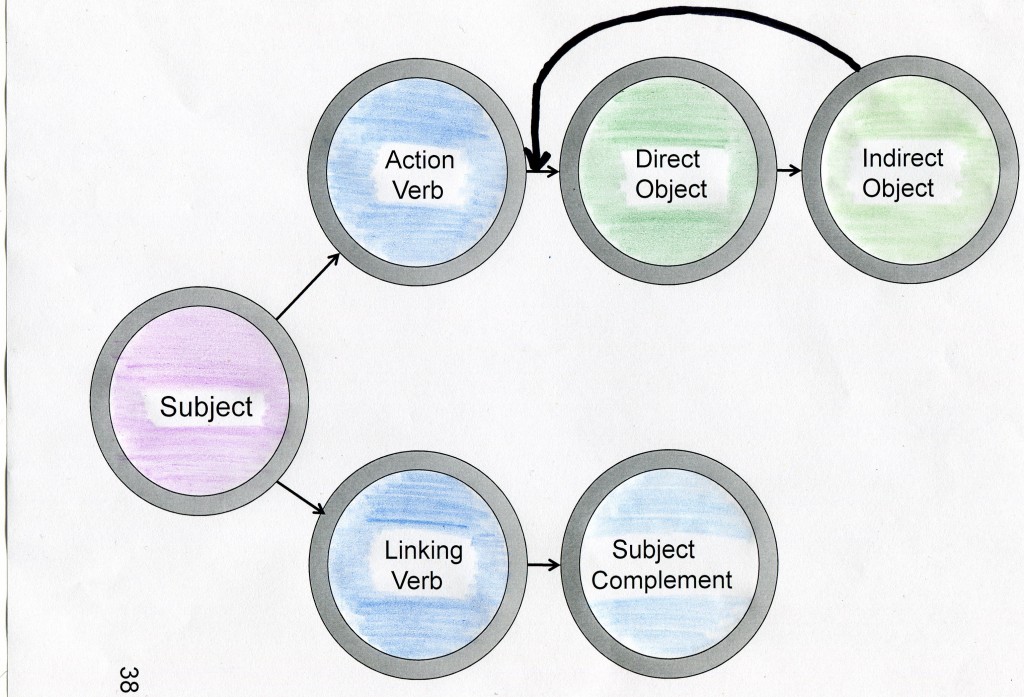 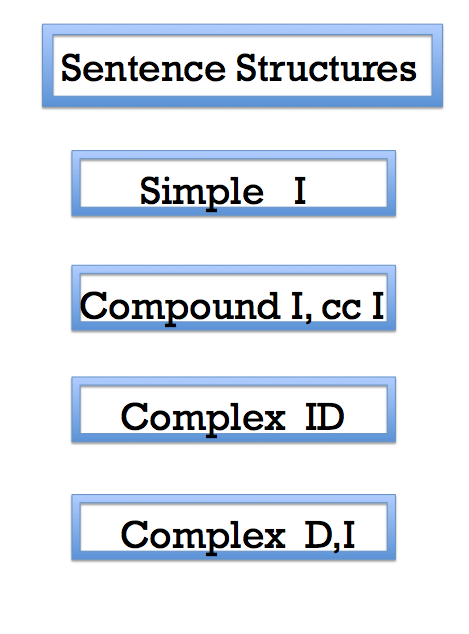 I like this visual of the main sentence structures because I can incorporate the correct punctuation for each sentence structure as we find examples of each.  Teaching grammar in this way is more intriguing to the students.  With each sentence their confidence grows because they are asked to explain their thinking which helps them build their own sense of how grammar works.

While some were discovering new things about familiar words this afternoon, one group introduced us to a brand new word.  Zoe found it in a book she is reading.  The word is sycophant.  It is defined as a self server; one who uses flattery to win favor with one who yields influence.  We might call such a person a “yes-man”.  It was decided that this person would not be considered sincere and should not be believed.  In Zoe’s book, the sycophant is not a person but a creature.

When it was time to practice our grammar, it felt right to incorporate our new word!  Here is another example of how we use knowledge, logic, and reason to analyze and better understand the structure of a sentence.

Normally, I would put a sentence up on the whiteboard and call on students to identify the

But since our work with word investigations, I’ve noticed how much the students love figuring things out in small collaborative groups.  So I wrote out sentences on long pieces of construction paper.  Each pair of students was given a sentence and asked to analyze it.  I created two of each sentence so that when groups were finished they could compare their analysis with the other group that analyzed the same sentence.  The last step will be for the four who analyzed each sentence to present their analysis on the whiteboard.

I was so pleased to hear the students use reason and logic in making their decisions.  Team members felt comfortable challenging suggestions being made, and each pair ultimately made their decisions based on evidence from either a dictionary, their brochure, or their Grammar Examiner notebook.  Yes, ladies and gentlemen, we are past the days of wild guessing and instead, expecting the order of things to make sense!

I was particularly impressed that with such interesting and complicated looking sentences, they ended up making very few errors.  At this point in the semester, the students are discovering that one word can be more than one part of speech, depending on its use in the sentence.  It’s interesting to listen to them critically think about which identification is most likely.

During this video the students were analyzing and identifying a compound sentence.  I first learned about analyzing sentences in this manner when I listened to Michael Clay Thompson at a seminar.  I was fascinated.  The students are really able to make better sense of how this all works together when they see all the pieces in action.  Every sentence is new, but the structures become recognizable … as do the subjects and predicates … and all of the rest of it.  I compare it to listening to an orchestra and talking about the role of the various instruments and how they complement each other…. and all while the orchestra is playing.  We are listening and making sense of it at the same time.