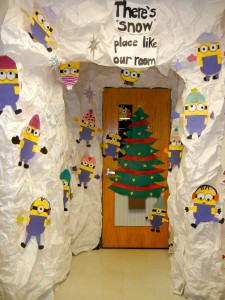 REST ASSURED that our party will still happen.  But because of the icy everything today, we will reschedule our reader’s theatre, auction, and party for Friday, January 3rd.

Until then, have yourself a ‘minion’ little Christmas!

Rockin’ Around The Christmas Tree

We finished reading this wonderful story today.  I look forward to reading it each year because my students need to know the original story.    There have been so many versions of this (and some are pretty far fetched) that I like to picture the characters and scenes as he wrote them.  The words he uses create such wonderful images.  My students and I had fun finding delightful examples of personification.  Let’s see what you remember…

Once students get used to the idea that they can expect spelling to make sense, and that they can figure out a word’s base and meaning by peeling off its affixes, the school day is different.  These days we talk “words” all day long.  For example, yesterday afternoon we were reading about the American Revolution.  There was mention of the “Intolerable Acts”.  I asked about the word <intolerable>.  Immediately the suffix <able> and the prefix<in> were spotted.  Someone else noted that the suffix <ate> could be added to the base <toler> to create the word <tolerate>.  Then we talked about the meaning of the prefix <in> and the meaning of the words <tolerable> and <intolerable>.

As we were finishing up that discussion, Maya raised her hand and said, ” I’ve been wondering about the word <debt>.  I’ve been wondering if the <b> is there because the word is related to the word <debit>.  Do you think that could be it?”  At that moment I was all aglow inside.  Here is my evidence that Maya has learned that letters are not just randomly assigned to words!  Maya has learned to look for a word’s spelling to make sense!  She also knows that looking at a word’s relatives is a logical first step when answering questions about a word’s spelling!

Another example is this morning’s word sum for <motion>.  The students recognized that the base would be <mote> and the suffix <ion>.  I asked why the <e> needed to be on the base word.  Sam gave me the example of adding an <ing> suffix, and that if the <e> wasn’t on the base, the consonant <t> would be forced to double.  I asked if there was other evidence that could be used.  The students didn’t quite get where I was going until we reviewed what we knew about bound bases.  They need an affix to surface in a word.  Since, at this point, we had only added suffixes to the base, I asked if anyone could think of a prefix that could be added to this base.  Rather quickly someone thought of promote, and just as quickly someone else said, “demote”.  There it was.  The single silent <e> was part of the base.  Here was another piece of evidence that the base was indeed <mote>.

This afternoon in math we began a chapter on division, so I wrote the word on the board and asked for other words that might pertain to division.  The words divide and divisor were added to the list.  Since these words seemed similar, I asked what the students were noticing.  I thought someone would notice that the base of divide seemed to be <vide> and the base of division and divisor seemed to be <vise>.  Instead they noticed things I hadn’t (which always delights me!)

1.  Brooke said, ” I think the <di> might be a prefix, but I know for sure that <ion> is a suffix, so my word sum is <divise> + <ion> -> <division>.  I loved the fact that she vocalized her hypothesis, but  went with what she had evidence for (prior research).

2.  Ryan said, ” I know that <bi> can mean life or two, and I remember that Old Grouch told us <di> can also mean two, so I am thinking that the <di> in these words might mean two.”  Here again, I have evidence that orthographic concepts are taking root!  Ryan is making connections between previously investigated prefixes and new words, and then he’s making logical guesses.  We didn’t have the time at that moment to follow up with Ryan’s hypothesis, but we will do so tomorrow.  That’s when I expect the understanding will deepen.

I can’t remember a Christmas that didn’t include listening to “A Christmas Carol” by Charles Dickens.  As a child I remember listening to it on the record player.  My brothers and sister and I knew the story so well we could quote it or improvise a reader’s theater performance by trading lines back and forth.  Then, of course, we also watched different movie versions of it.  For a long time, the 1951 version with Alastair Sim was my favorite, but since then there have been an amazing number of different takes on this classic story.  I have enjoyed some of the musical versions, and been “ho-hum” about others.  I’ve been to several live performances (even starred in one as a charwoman!) and have always looked forward to seeing how the ghosts would appear and what they would look like.  It’s a story that I never grow tired of hearing, seeing and reading.

On Monday I began reading it aloud to the class.  I paused and talked about things when I thought it would help them build a stronger connection to the story.  Once in a while I also paused to mention Dickens’ masterful use of personification, similes, and metaphors.  The students spent some time researching workhouses, and what life was like in London during Dickens’ time.  But the one thing we pause to appreciate on every single page is the vocabulary Charles Dickens used.

This morning we looked at the list of synonyms he used when referring to Jacob Marley’s ghost.  The list included:  ghost, phantom, apparition, shade, spirit, and spectre.  When asked which of these words felt the creepiest, students named phantom, apparition, shade, and spectre.  I especially liked what Hannah and Abby said about the word <spectre>.  They said it made them think of something always looking at them, but that they couldn’t look back.  Eric told of a neighbor dog named Phantom who often roamed the neighborhood, staying out of sight.  Ryan and Chris both thought apparition had a spooky feel to it.  Charles Dickens could easily have stuck with using only the word ghost, but he didn’t.  And because he didn’t, he helped create a ghost that we feel slightly different about each time he’s mentioned.

One word that the students did not know was <impoverished>.  I wondered if the students could look at this word and use what they know about affixes to get at the meaning of the word.  Sure enough … the first person recognized the suffixes <ed> and <ish>.  The next person recognized that <im> was a prefix.  That left us with <pover> as a base.  Immediately, Ryan raised his hand with enthusiasm and said, ” If you add <ty>, you’ll have the word <poverty> and that means being poor!  This is what I love about orthography!  As the students headed off to lunch, I looked up <impoverished> on Etymonline and found out that it was first used in the 15th century.  It was an Old French word whose base was <povre> meaning poor.  Ryan was spot on!

The following excerpt is of the part of the story we just finished.  We will begin Stave 2 and meet the first ghost tomorrow … when the bell tolls one.  🙂