After viewing a video of Dan Allen’s fifth graders taking on a “Suffix Challenge”, I was ready to have my students do the same.  My first thought was that I would find out how much they really understood about word structure.  My second thought was that we could begin the year with a nice collection of proven suffixes which would benefit the students throughout the year as they investigate words.  Beyond that I was open to anything that might surface.

Here were the instructions.  Each group of three or four students would get a large piece of construction paper and the use of both digital and hardcover dictionaries.  The task was to list as many suffixes as possible and to prove each suffix by listing at least three words that clearly had that suffix in their word sum.  The groups worked for 20 minutes on each of two days.  On day three, I gave each group a reflection sheet and a Suffix Challenge poster (NOT their own).  They were to discuss what they saw on the poster.  Which suffixes did the group believe were proven effectively?  Which suffixes did the group question?  Which example words did the group question?

So how do you actually prove that one or more letters at the end of a word is a suffix?  (We had previously had the discussion that a word can have more than one suffix, but for this activity we were focusing on the final suffix in a word.)  Well, I told them that if they could come up with three or more words that kept their meaning with or without the suffix, I would be convinced.  Many of the students began with familiar suffixes: <-ed>, <-s>, <-es>, and <-ing>.  As I circulated on the first day of the activity, I had the opportunity to see how little my students really understood about suffixes.  One group listed <-ing> as the suffix and the words <bling>, <fling>, and <ring> as words that prove it.  I wonder if this confusion is what comes of erroneously calling words that rhyme in this way  “the ing family”.  I asked this group to give me word sums for the word <ring>.  They quickly realized there was a problem.  I asked if the <-ing> suffix could be added to the word <ring>.  The light of recognition went off on one boy’s eyes, and I knew I could leave and check in with another group.

The day the students reflected on the other group’s poster was particularly fun.  The students were so engaged.  They were interested in the suffixes they themselves hadn’t thought of.  They enjoyed questioning aspects of the poster and then defending it.  I was amused when I heard several times, “We don’t even think this one is a word because we’ve never heard of it!”  I’ve learned so much in the last two years about responding to students during inquiry.  I simply said, “Well, how could you find out for sure?”  I have learned to simply put the inquiry back in their capable hands.

So many interesting things happened during this activity!  I realized that students are more familiar with dropping the single silent <e> when adding a vowel suffix and less familiar with replacing it when they remove that vowel suffix.  One group thought that <iced> and <sled> were not examples of an <-ed> suffix.  Their first response was to cover the <ed> part of the word and see what was left.  With the word <sled>, they were right.  The <ed> is part of the base and not a suffix.  But with the word <iced>, they didn’t recognize that the free base was <ice> and the suffix was <-ed>.

We had opportunity to talk about words in which the final <y> changed to <i> before added an <-es> suffix, as well as noticing that in some words the final consonant is doubled when adding a vowel suffix.  Those two conventions will be talked about again.  For now, my students are getting used to the ideas of explaining their thinking and defending their choices.

One last thought for those who want to try this in their classroom…  In addition to having the students list three example words under each suffix, have them write a word sum for each.  There was a lot of confusion about words in which the base had a final silent <e>.  By simply covering the suffix with their finger, they forgot to imagine that <e> in its place.  A word sum might help them with that.

We are reviewing what we have learned about our atmosphere.  Here are a few of the  videos that prompted some fascinating thoughts and discussions.

In our recent investigation of the word <biosphere> we found that the most likely hypothesis is <bi> + <o> + <sphere>.  The base <bi> is from the Greek bios meaning life.  In searching for some other words that share this same base students found:

The word biotic was an unfamiliar one until we added the prefix <anti> to it.  When I asked if anyone had ever taken an antibiotic, almost all hands went up.  With the shared understanding that an antibiotic was a medicine, we could talk about the word’s denotation or literal definition.  The prefix <anti> means against and the base <bi> means life.  An antibiotic is against (destructive to) micro-organisms (living organisms) in the body.

Two students from each class wore waders and got in the water with me.  We demonstrated how scientists take kick samples using a D frame net.  Then the samples were carried to the waiting white pans.  The rest of the class spent time examining the macroinvertebrates in the pans and marking down the types and numbers of macroinvertebrates they found.  The calculations would come later when we returned to the class.  In the meantime, we were looking at the insects living in the creek (biotic) knowing that their numbers and sensitivity to pollution would be what would determine the water’s quality.

Here are some pictures from our trip to the creek. 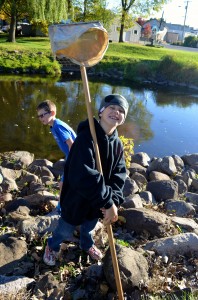 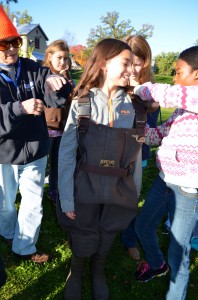 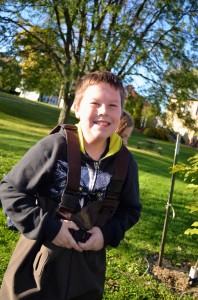 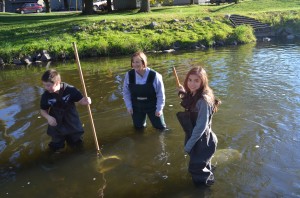 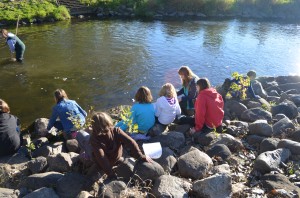 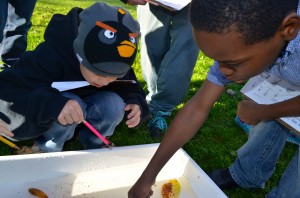 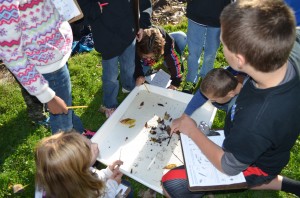 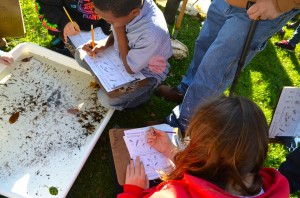 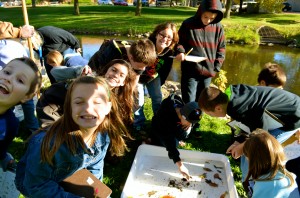 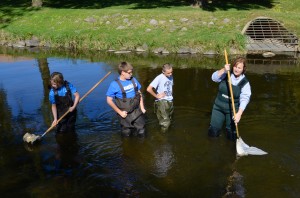 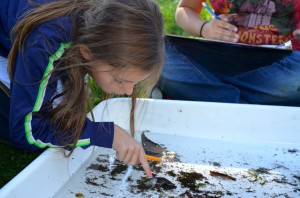 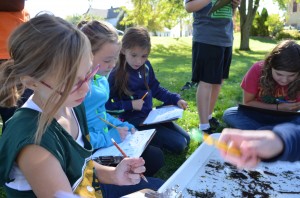 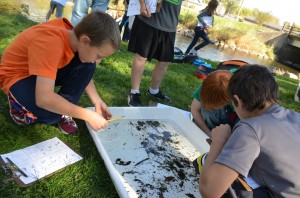 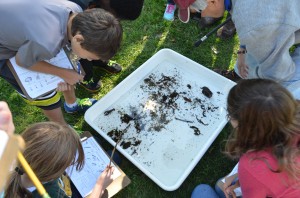 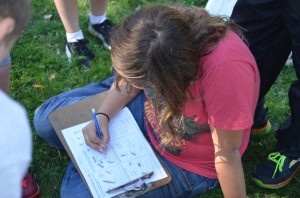 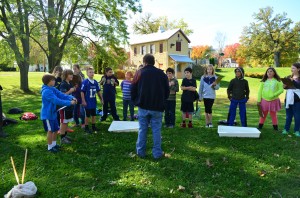 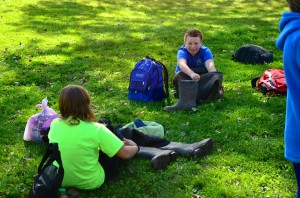 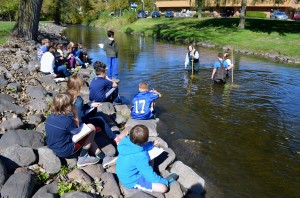 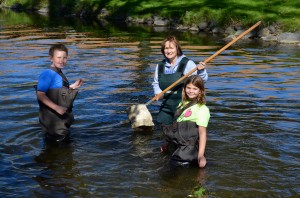 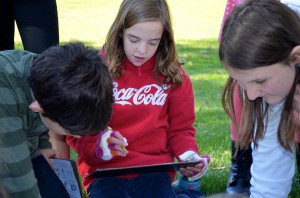 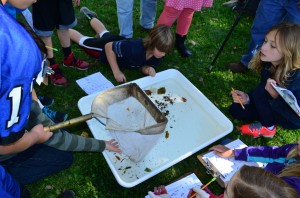 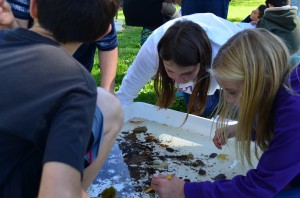 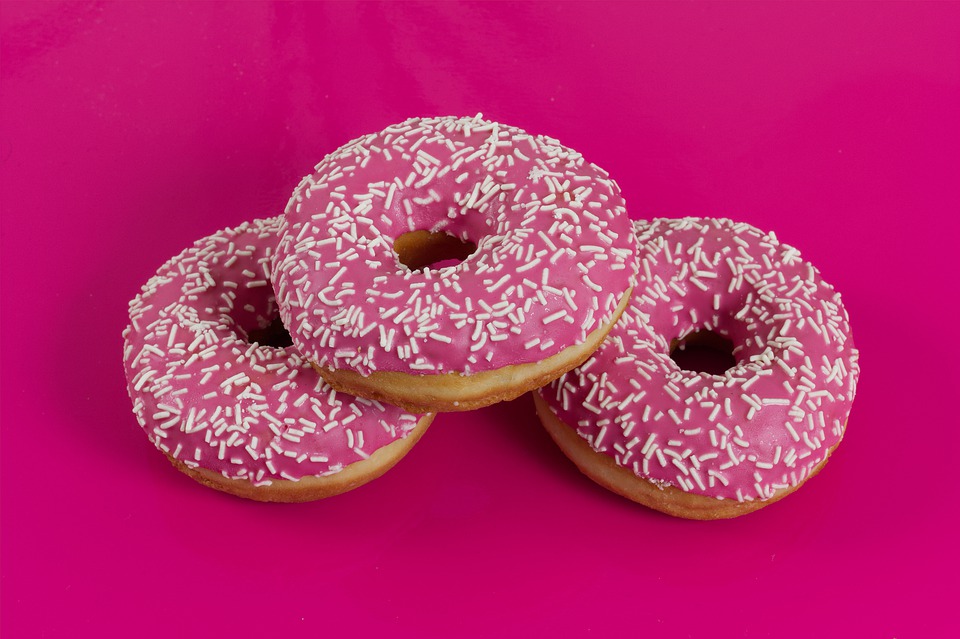 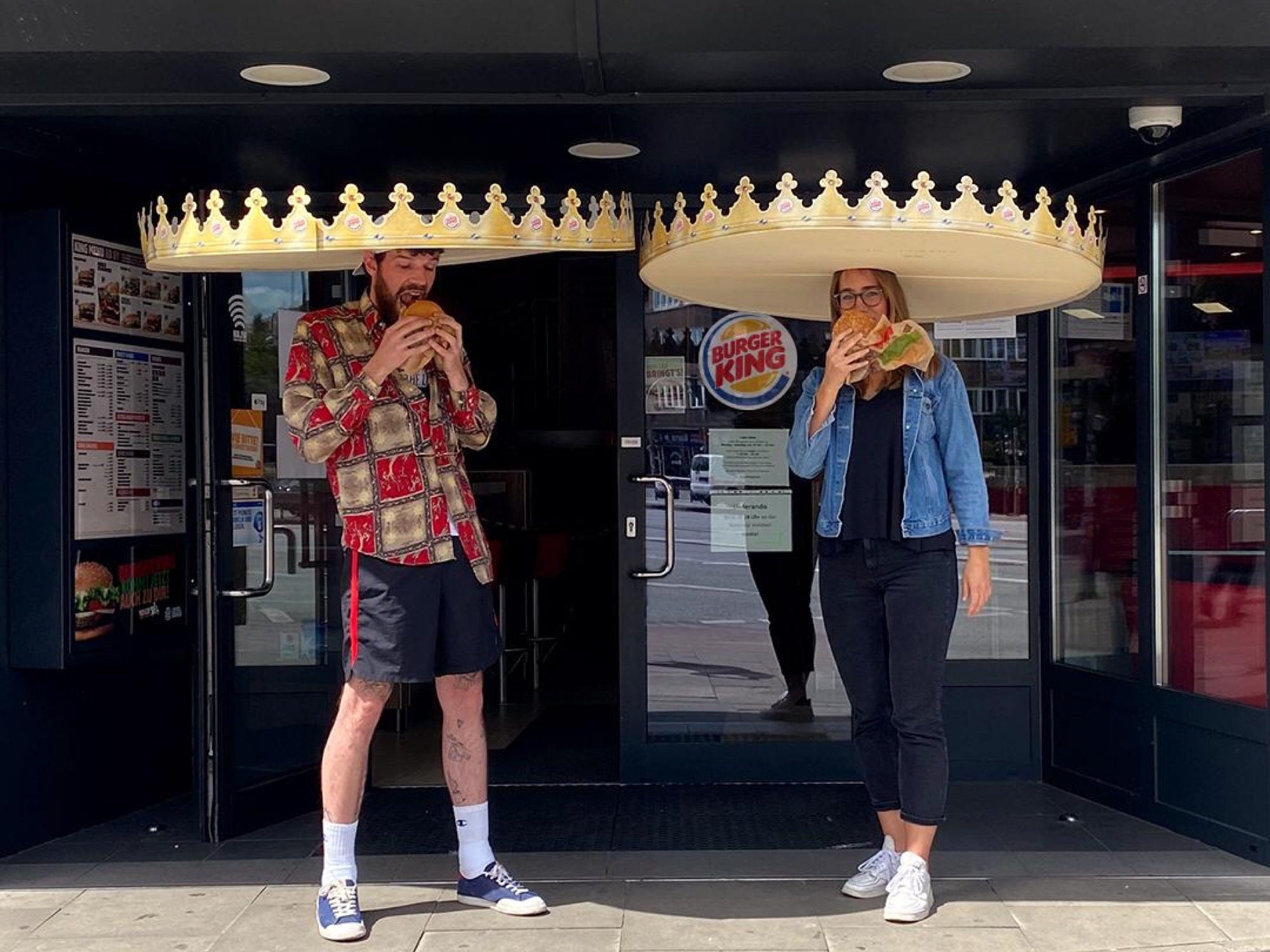 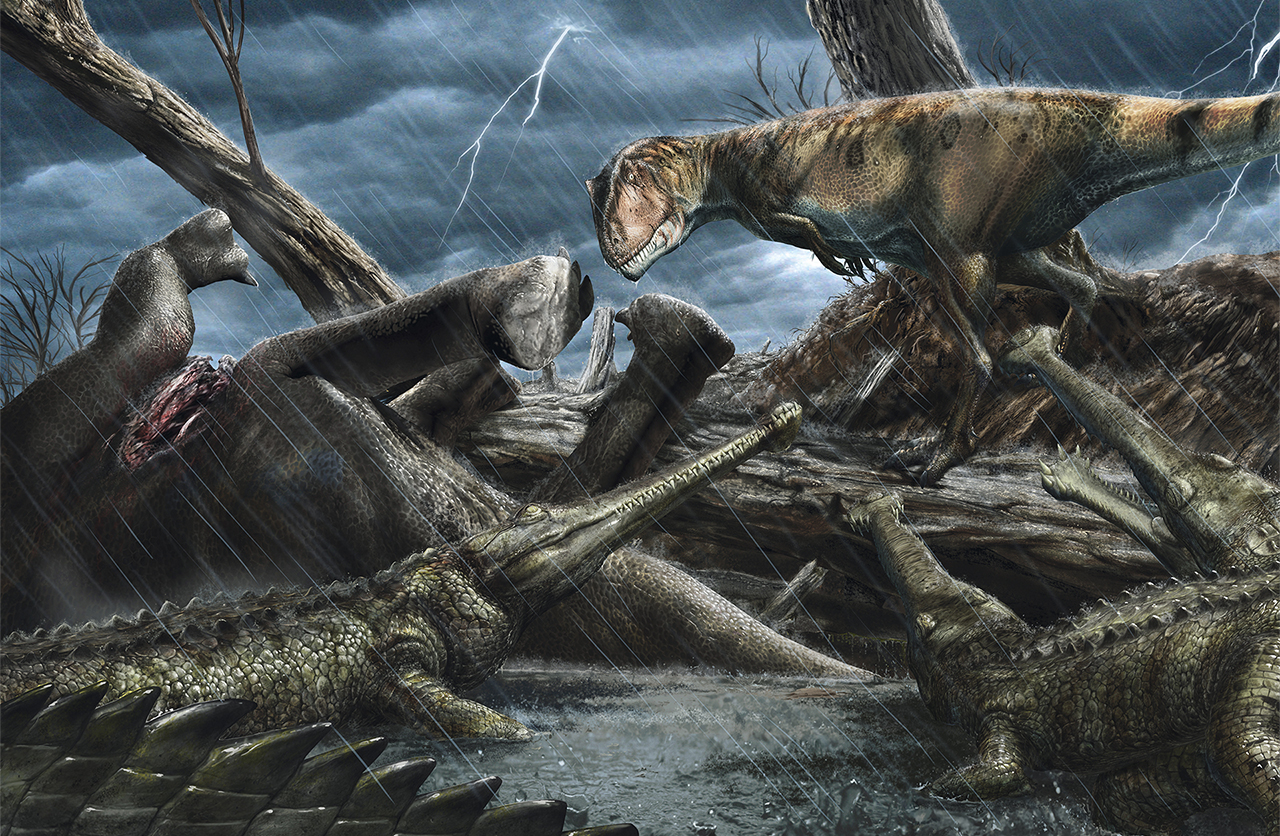 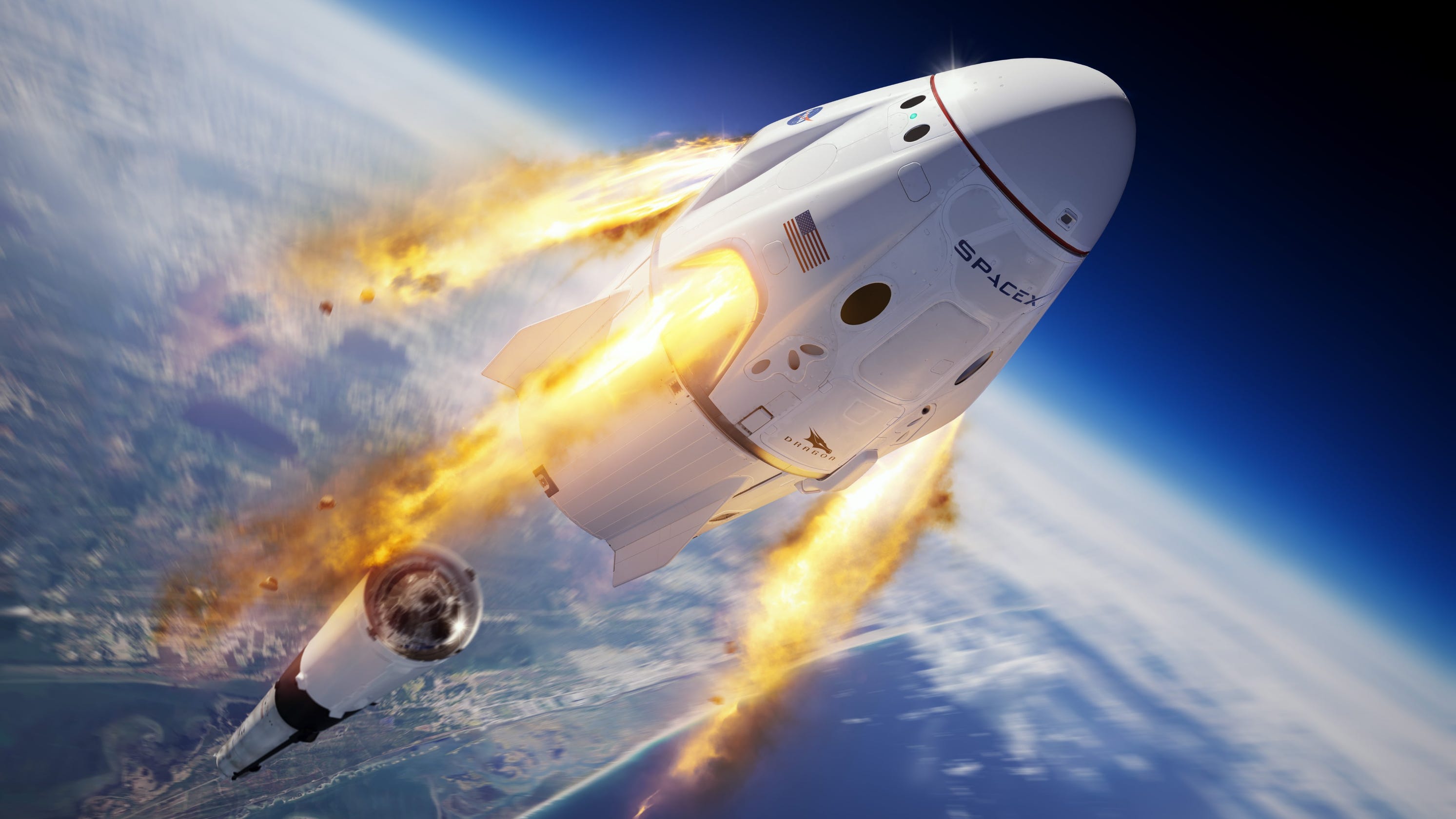 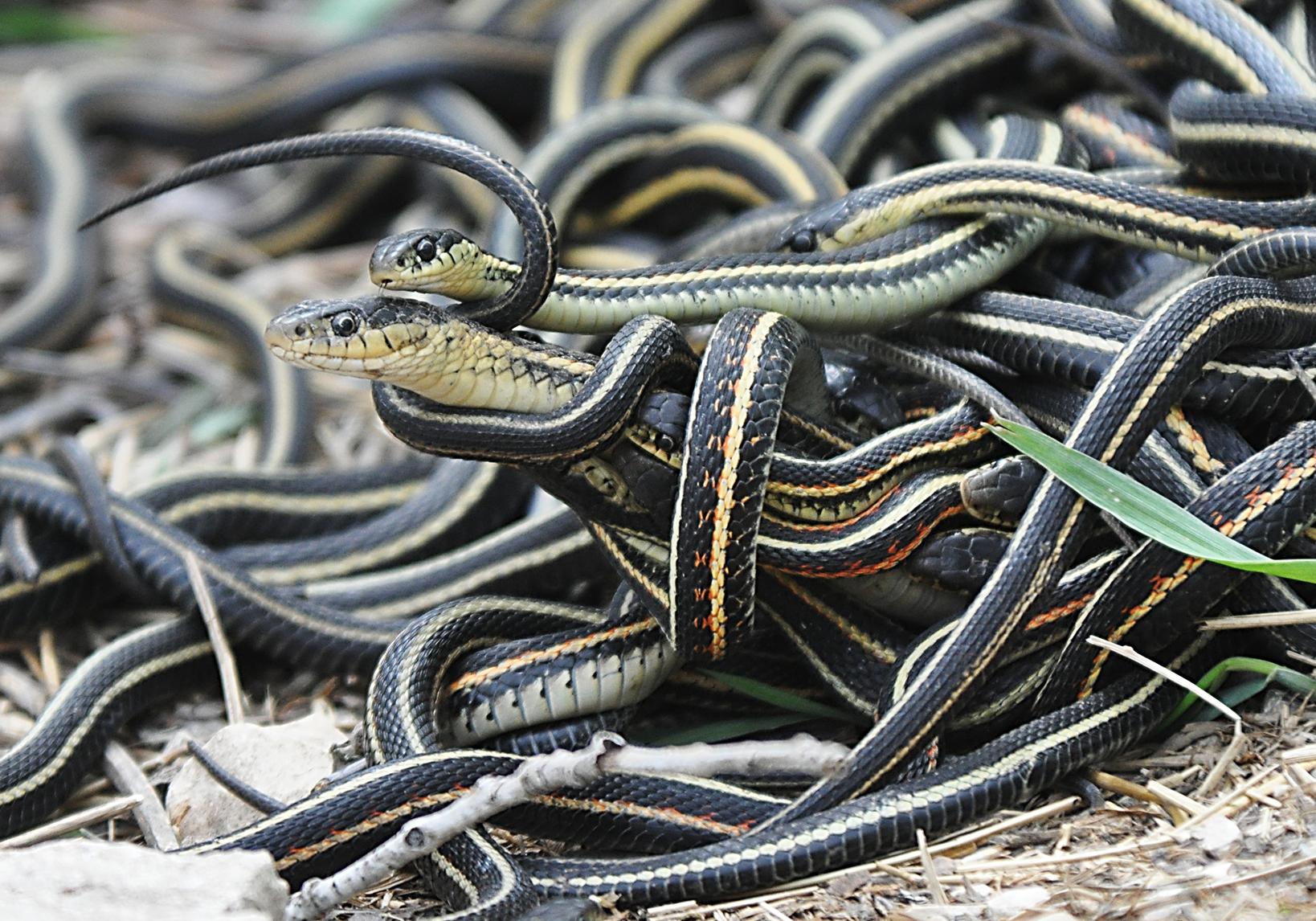