A few posts ago, Mayah and Martha began their investigation of the digraph <ge> and the trigraph <dge>.  In the second film down on  Developing a Scientific Mindset you can hear what they were thinking when they first began.  Well, now they have presented their findings.  As you will see, all sorts of questions sprouted up which took them in several directions.  Some of what they have done is very well supported, and some could use a bit more evidence.  The great news here is that they kept coming up with new questions.  Such a scientific mindset!  “Why is it like that?”  “Is it always like that?”

In that first film, they were asking questions about the phonemes represented by <g>.  Looking back, I wish I had talked to them about the International Phonetic Alphabet and the accurate way to put into print those phonemes.  As you will see in this new film, both girls refer to <g> as representing /g/ and /j/ instead of /g/ and /dʒ/.  Another question they had was in regards to <g> used initially in a word. They wondered why it sometimes represented /g/ and other times /dʒ/.  They had words like <gear> and <geek> on their list of “Words with <ge>”, and I wondered aloud if a vowel digraph following the initial <g> had any bearing on the pronunciation of the <g>.  I asked them to collect words with a similar pattern to see.

The collection they put together does not really have enough evidence to answer that question, but it sure brings to mind some other questions.

I’m delighted that Martha and Mayah noticed so much with this investigation.  Never having had the opportunity to look at words in this way, there is much to see!  Here are some of their hypotheses concerning the letter <g>.

As I said earlier, some of these need more evidence.  Whether or not we can count on them as hard and fast rules is not the most important thing right now.  What is important is that Mayah and Martha are learning to look at words and how they are spelled.  They will not hesitate to wonder about letters and the phonemes they represent.  And they are equipping themselves with a way to deal with their questions and wonderings. Instead of learning to spell each word in isolation, they are looking at graphemes and phonemes and noticing that our language is indeed logical.  There are some very predictable patterns occurring all over the place!

Last week I wrote a post called, ” Lab Coats Are Optional”.  In that post I described the scientific approach we are using to explore familiar words. As I walked around the classroom today with my video camera, I was thrilled to hear the kinds of conversations students were having about words, letters, and phonemes.

In this first video, Daphne and Emma share what they have noticed about words with the <ch> digraph and words with a <tch> trigraph.

At that point I suggested we look at Etymonline to see if <attach> is an English word.  Often times the rules that apply to English words do not apply to words that are not English.  We found that it has French origins!

In the next video, Kacey has made some quick discoveries about words with <k> as compared to words with <ck>.  Then Martha and Mayah begin a look at words with <ge> and words with <dge>, but have interesting questions about the phonology of <g>.  I enjoyed seeing their curiosities become unleashed in this way!

At this point I am encouraging the students to make lists of words that support any hypotheses they are making.  I would also like groups working on the same digraph/trigraph combinations to get together and compare their findings.  Perhaps they can combine their word lists so that they can have an even bigger sampling of evidence to support their observations and hypotheses.

It is obvious to me that these students have not been invited to really look at words and spelling in this manner before.  Some of the students are struggling to put their thoughts onto paper in order to explain what they see .  Some lose interest quickly because there is no quick answer.  But once they realize I am not looking for “that one right answer”, they relax and begin to let themselves really wonder about the words in front of them.  And finding the right words to explain their thinking will only improve with practice.  “It usually always does”, she said with a wink. 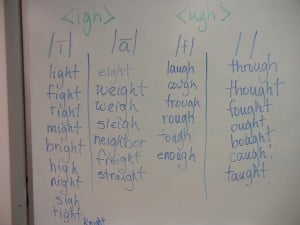 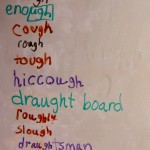 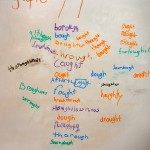