Preface:  Turning a magnet inside a generator makes the electrons flow, which in turn creates electricity.  Yes.  There is a parallel to be drawn here.

I had an amazing mother!  My favorite parts of me were influenced and/or nurtured by her.  I see that so clearly with every moment I spend remembering her.  One of my favorite memories involves our weekly trip to the library.  We each (five children and one mom) brought home a carefully selected stack of books.  The anticipation of getting home and reading those books was magical! 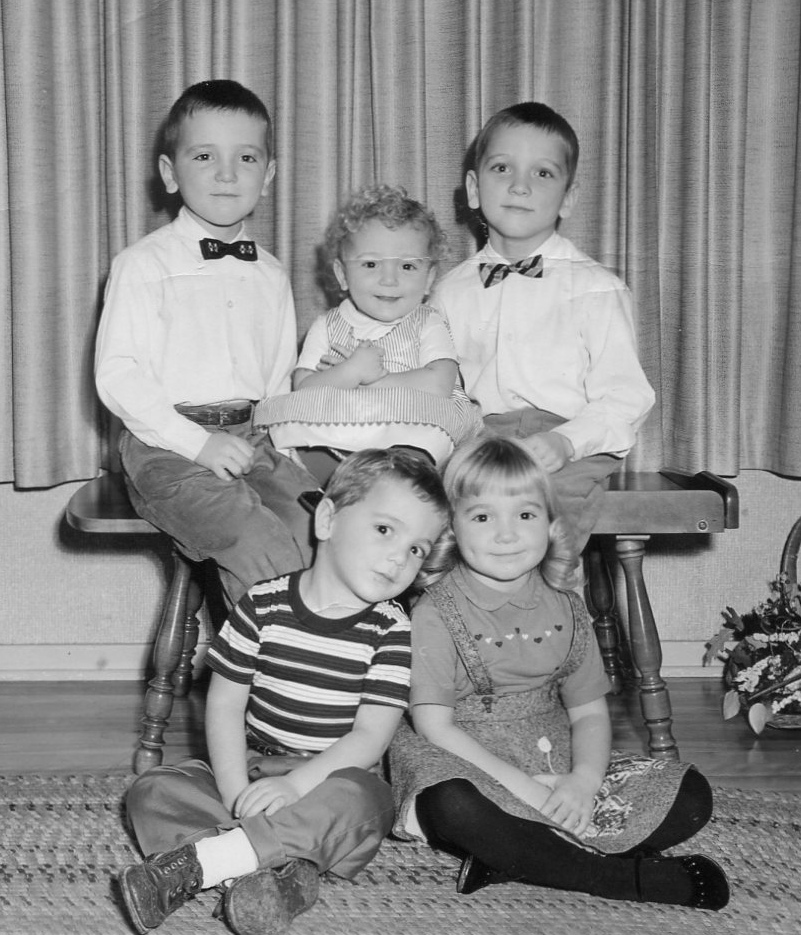 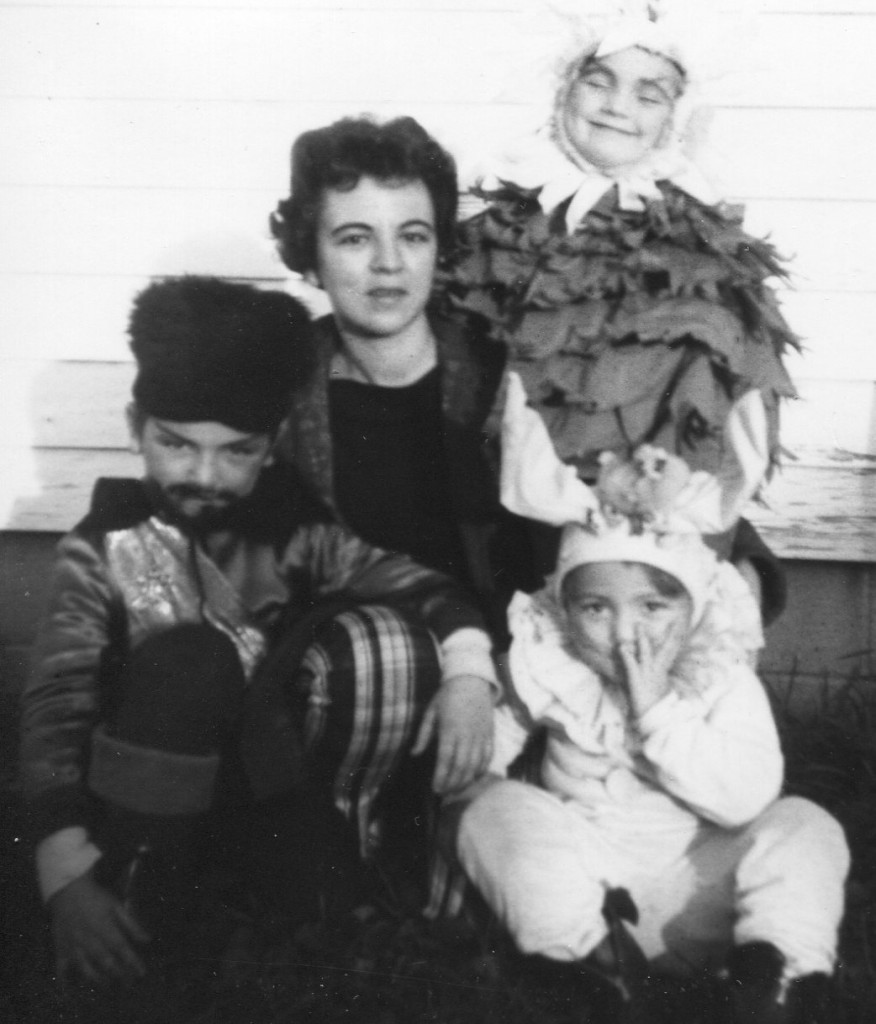 Here is what I picture:  We all have our own spot in the living room, each with our stack in front of us.  We dig in and read.  It is electric in that room.  I can feel the words in everyone’s head leaking out into the room.  There is occasional laughter and it is noted by all.  There will be a request to pass that book around later.  After a lunch break, my brother pulls out one of his choice books and we all beg my mom to read it.  But what we really mean is for all of us to sing it.  It is one of those stories that is also a song.  It is called The Fox Went Out on a Chilly Night.

That is how I learned new words.  We all read constantly and reveled in it!  We talked about what we read and recommended books to each other from our weekly choice stacks.  Unfortunately, that routine changed when I turned six and went to live with my dad.  BUT the love for words and books was embedded deep inside me where it resides still!

The current investigations my students are engaging in create that same atmosphere in our classroom.  I hear it when I listen to the videos.  At times everyone is chiming in at the same time with enthusiasm and enlightenment!  Students are redigesting familiar words and welcoming many new words.  They are seeing the true sense of what a word family is.  They are recognizing the role of a prefix in contributing to a word’s sense and meaning.  It is electric in the room.  I can feel the words in everyone’s head leaking out into the room!

Learning about the four principal parts of a Latin verb and how to remove Latin suffixes to reveal the etymon continues to lead to some of the richest discussions in my classroom!  In this first video, we look at the Latin verb Spondeo, Spondere, Spepondi, Sponsus.  One of the first questions that comes up is in regards to the potential <e> in the final position of the bases.  I love that the students challenge each other to explain why or why not we might consider adding one.  When considering the base <sponse>, Shelby points out that in the word <response> we see that final non-syllabic <e>.  That is evidence that it belongs on our base.  When considering the base <spond>, Kaeleb points out that it is not a 1-1-1 word.  What he means by that is that although it is a ONE syllable word, it doesn’t not have ONE final consonant with ONE vowel preceding that consonant.  Many of the students know that if a word has one syllable (or the stress is on the syllable to which suffixes will be joined), and has a single final consonant with a single vowel preceding that consonant, the final consonant will be forced to double when adding a vowel suffix.  It was a delightful bonus to hear Kaeleb also give more evidence supporting the final non-syllabic <e> in the base <sponse>!

The second student on this video looks at Frango, Frangere, Fregi, Fractus.  As she was reading through the words in this family of twin bases, I noticed that she had a “dictionary definition” for fraction.  I wanted to hear how the students define that word.  Then we talked about adding a word that we explored the previous day.  It was part of another student’s investigation of these same twin bases.  The word was <fractal>.

Fractals have always fascinated me, and I thought they might fascinate my students as well.  We began by watching a short Youtube video explaining what they are.  Then we drew a triangle fractal and a tree fractal. 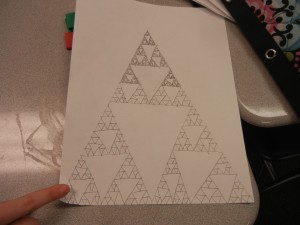 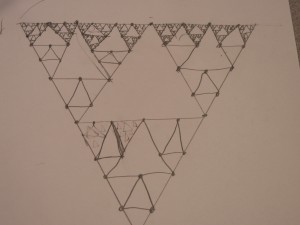 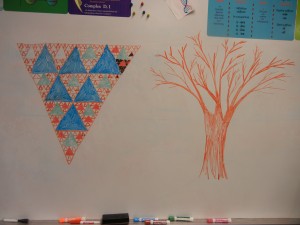 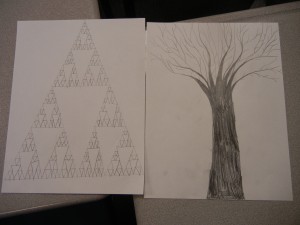 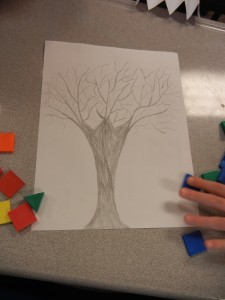 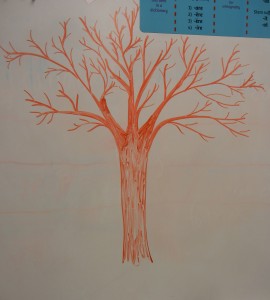 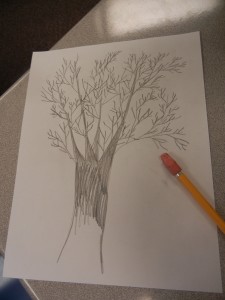 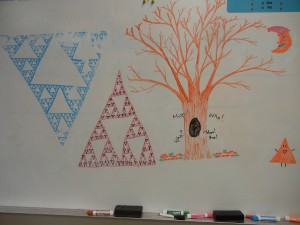 A basic shape repeated over and over, each time the shape is smaller in size.  The students have been drawing both ever since!

In the next video, a student looks at the Latin verb Moveo, Movere, Movi, Motus.  As is becoming usual, the students ask the same questions I would.  One of the first questions was in regards to the word <smote>.  The students had never heard of it before.  I questioned the <s> representing a prefix.   We put it on our Wonder Wall for the time being.

The discussion about the words <promote> and <demote> also created a deeper understanding of both.  I try to ask often, “How do you use this word?  How else can we use this word?”  I want the students to be able to understand these words in several circumstances.

And then, of course, someone contributes another reason that the base <move> will have a final non-syllabic <e>!  Brilliant!

One of my favorite discussions has been regarding the word <commotion>.  It is becoming obvious to me that the students still do not automatically wonder what effect the prefix has on the base’s denotation.  Once I steered the discussion in that direction, there was quite a commotion as “light bulbs of recognition” went off all over the room!

In the next video, the first student looks at the Latin verb Tracto, Tractare, Tractavi, Tractatus.  This family of words led to some great discussions as well.  Parker was able to share his personal experiences working with bees to explain an extractor.  Ilsa was able to jump in when we used extract as a cooking ingredient in the kitchen.  We had an equally interesting look at the different circumstances in which we use <contract> and <contraction>.

The second student looked at the Latin verb Struo, Struere, Struxi, Structus.  I noticed right away that this student included <struthious> as a word that shared the <stru(e)> base.  When I saw the definition she included on her poster, I knew it didn’t belong.  She wrote, “resembling or related to the ostriches or other related birds”.  While I am surprised that she didn’t recognize that this word and this base don’t share meaning, I am used to seeing this kind of thing.  Even this far into the school year, my students need to be reminded that spelling represents meaning, and that in order for two words to be in the same family, they need to share spelling and meaning.   I need to remind myself that spelling and meaning have often been considered separate tasks in their past.  Making sense of spelling is new to them.  But as you can plainly hear in their voices, their enthusiasm and confidence is intensifying as they learn to question and search!

Turning a magnet inside a generator makes the electrons flow which in turn creates electricity.  Yes.  There is a parallel to be drawn here!