You know how sometimes you look at a word you’ve written hundreds of times, and all of a sudden it looks totally strange?  That happened to a colleague today.  There was a math story problem that the whole class was working through.  The problem had to do with a school bus – more than one to be exact.  I don’t know what calculations were required to solve the problem, but I do know that writing the plural of bus is what stumped the teacher.  At first she wrote ‘busses’ on the board.  But then she couldn’t stop looking at it.  “That doesn’t look right,” she thought out loud.  “But yet it doesn’t look completely wrong either.”

The students (who tend to love correcting adults) shouted, “There’s only supposed to be one ‘s’ in the middle!”

As the teacher rewrote the word and changed it to ‘buses’, she agreed with the students.  “Yes, that looks right.”  But instead of turning her attention back to the math part of this, she paused and asked the following question.  “But why is it spelled with only one ‘s’?

The responses she received were similar to the responses I get when I ask a question about spelling.  The students have been taught that spelling is a reflection of pronunciation, so they don’t think of letters in a word as being there for any other reason.  For example,  when she asked why it was spelled with just one ‘s’, the students tried desperately to explain that there is a pronunciation difference between ‘busses’ and ‘buses’.  Hmmmm.

Lucky for me, I had lunch with this teacher and she shared the discussion they had.  My first reaction was that the suffixing convention tells us to double the final ‘s’ on the base and spell this plural as ‘busses.’  But we both acknowledged that we spell it as ‘buses.’  My next thought was that perhaps this was a case of American English spelling versus British English spelling.  But I wasn’t sure.  I couldn’t hide how delighted I was!  When you least expect it, an opportunity to learn something you didn’t even know you didn’t know pops up!  I love it!  I couldn’t wait to see what I could find out.  I went to my computer and searched “buses or busses?”

What I found was at Merriam-Webster.  I read that until 1961, ‘bussed’ was the preferred spelling.  So!  Both spellings have been used!  I couldn’t help but wonder what happened to cause the spelling to change.  As often happens in moments of great discovery like these, the school bell rang.  I had to go to the lunchroom to pick up students.  I would have to read the rest of the information, when I returned.  The group of students who had been in math with this teacher, would be in my room after lunch.  A perfect opportunity to discover things and build understanding together!

Once the students and I were all settled, I wrote <hopping> on the board.  I asked for the word sum.  Someone offered, “h-o-p + ing.”  Then the same person added, “but you double the <p>.”
“Why?  Why does the <p> get doubled?”
“Because there’s no <e> like there is with ‘hope’.”
To illustrate for everyone what this student was saying, I wrote the word sum for ‘hoping’ on the board as well.  We reviewed the suffixing convention that calls for the vowel suffix <ing> to replace the single final nonsyllabic <e>.  Then I directed everyone’s attention back to the word sum <hop + ing>.  “There is no single final nonsyllabic <e> on the base, and because there isn’t, we need to pay attention to what is final on this base.”  As you can see, I underlined in blue the single final consonant on the base and then I underlined the single vowel in front of that consonant.  I explained that the reason we double the <p> is because we are adding a vowel suffix to a base which ends in one final consonant and has one vowel in front of that consonant. 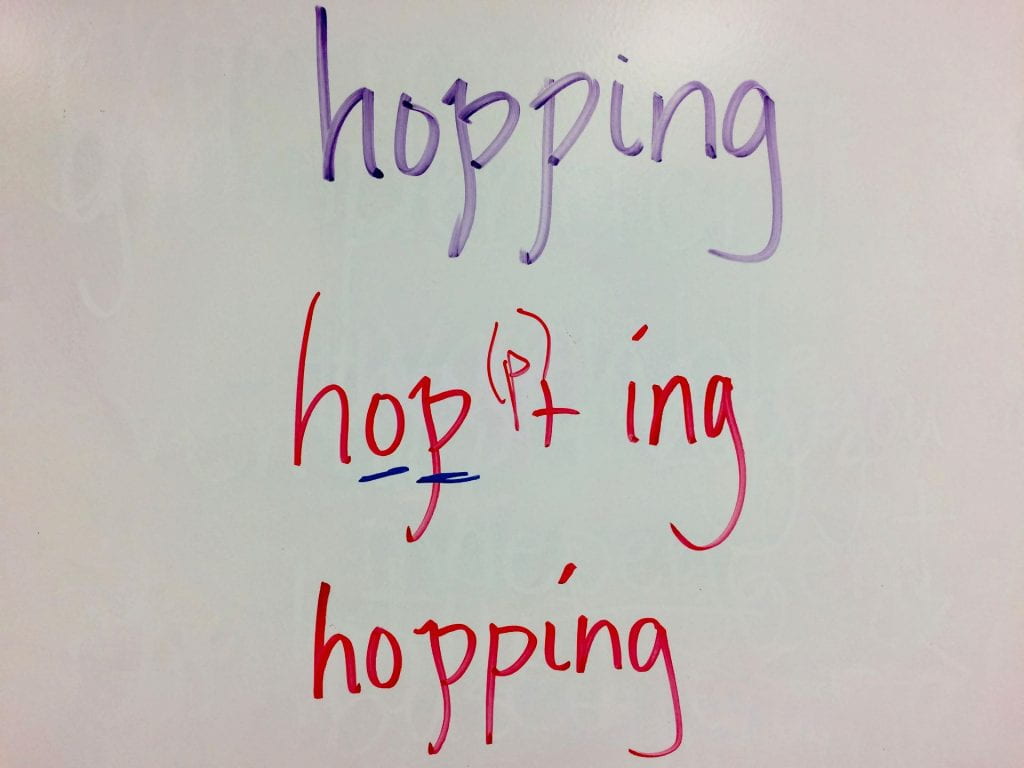 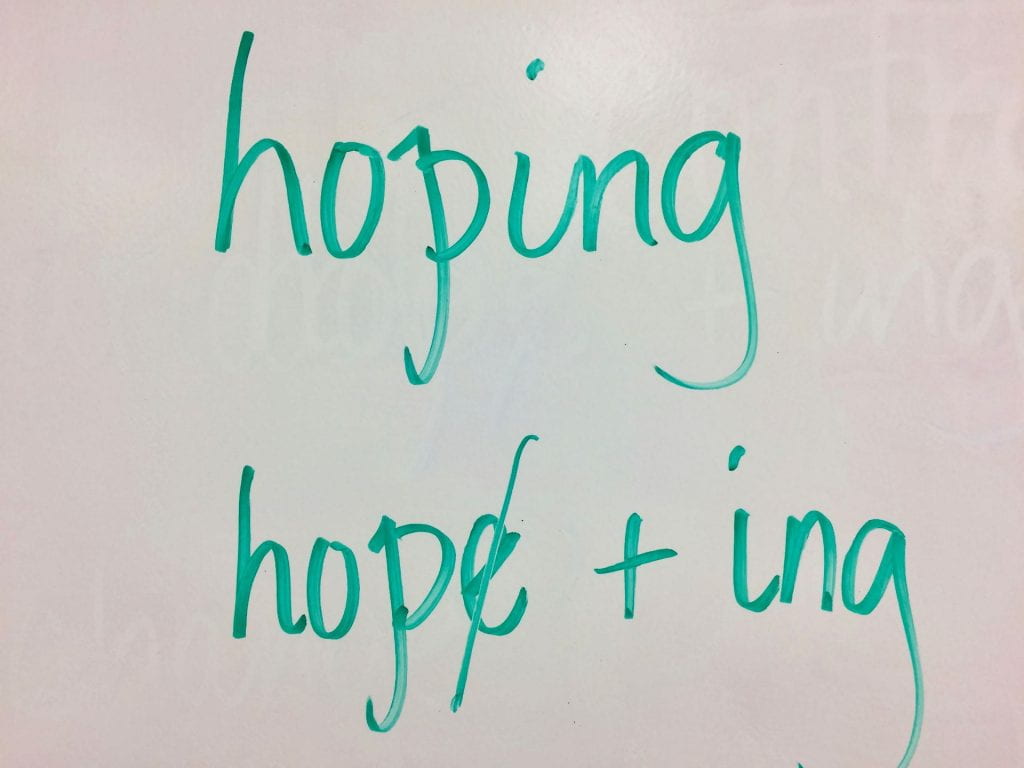 What happened next was kismet.  A student in the back raised her hand and asked, “What about a word like buses?”  Perfect!  They were still thinking of the conversation in their math teacher’s room.

“How do you spell that?”
“It’s spelled b-u-s-es.”
“Interesting.  Look back at ‘hopping’.  Don’t we have the same situation here?  Like we did with <hop>, we are adding a vowel suffix to <bus>, which has one final consonant and one vowel in front of that consonant.  What do you think the word sum would be for that word?”
“It would be <bus + es>.”
“If we use the same suffixing convention we used with <hop>, how should we spell the plural of ‘bus’?”
“It should be b-u-s (double the s)-es.”

I wanted to make sure everyone understood that we begin by following the reliable suffixing conventions.  When we find a word that doesn’t seem to be following those conventions, we are ready to ask why not.  I wrote the two spellings on the board and we wrote analytic word sums.  It was easy to write the one for ‘busses’ because we could explain the suffixing convention that would be applied.  When we thought about a word sum for ‘buses’ it was as if the two morphemes coming together repelled as two magnets might.  We needed to understand why the final <s> on the base did not get doubled.  It was time to show them what I found out earlier. 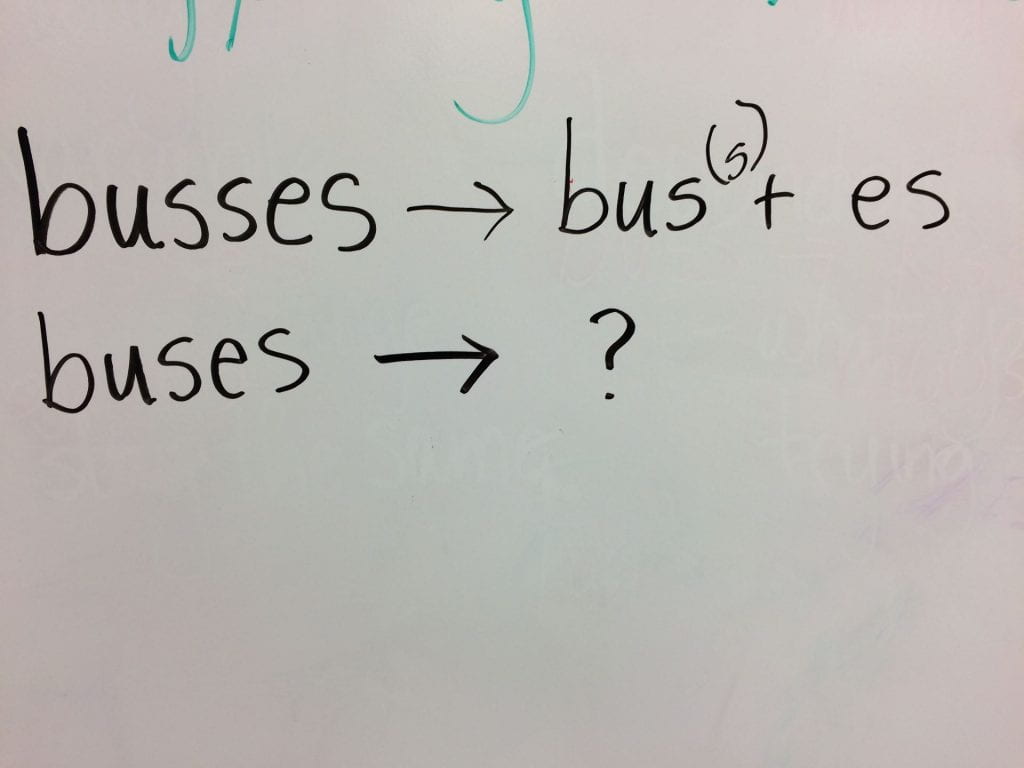 A quick look at Etymonline revealed that the word ‘bus’ is really not all that old.  It was first attested in 1832. It was an abbreviated form of ‘omnibus’ which was attested only three years earlier than that.  An omnibus was a four wheeled vehicle that had seats for passengers.  That’s not so different from what we think of as a bus today.  It was a vehicle for all as the Latin <omni> “all” suggests.  Below is a picture of an early horse drawn omnibus. 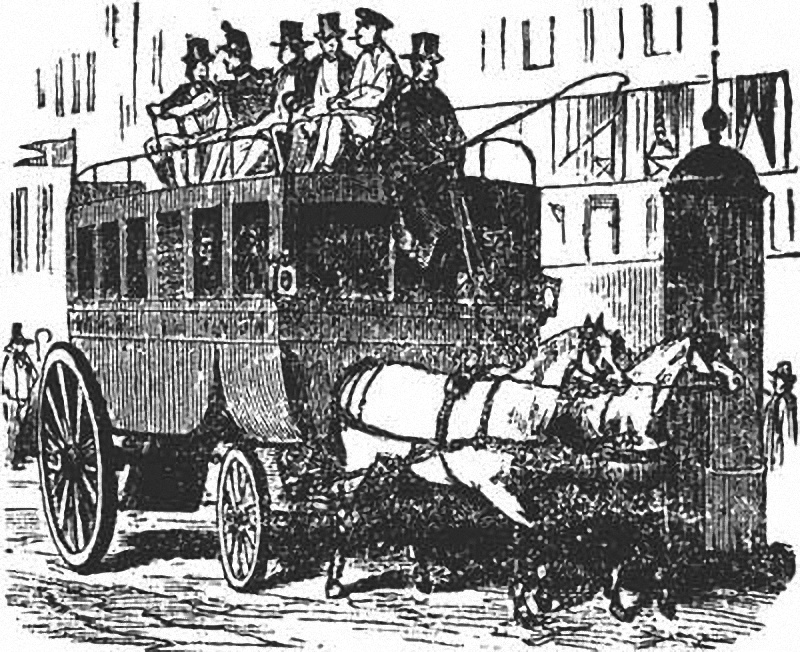 According to Merriam-Webster, by the 193o’s this word’s popularity started to bump heads so to speak with the already existing word ‘buss.’  Never heard of it?  Me neither.  It took me quite by surprise!  It is much older than ‘bus.’  According to the Oxford English Dictionary, ‘buss’ was first attested in 1567!  As a noun, a buss is a loud or vigorous kiss.  It is thought to be based on the sound that a loud or vigorous kiss might make!

As I was reading a 1996 use of this word in the OED, I realized what the problem would be for these two words.

“1996   Entertainm. Weekly 5 Apr. 96   Even after Maddie and David consummated the 1985–86 season with a passionate buss in a parking garage, viewers were not satisfied.”

In the above sentence, the singular form of buss is used, but what if more than one kiss was given in that parking garage?  The season would have been consummated with passionate busses in a parking garage!  Someone reading this would have to stop to wonder if these were passionate kisses or passionate vehicles!  It made me laugh thinking about how confusing this could be.

I altered the quote above so that it was more appropriate for my students.  I said, “Imagine how confusing it would be if I said that I saw someone give someone else two busses in the parking garage.”  It could mean someone received two kisses, or it could mean they received two vehicles!

We wrote the word sum for ‘busses’ and compared it to that of ‘kisses.’  We noted that <es> was the suffix used and why that made sense.  We laughed when thinking of what a single <s> suffix would look like when joined to this base or even how it would be pronounced.

Someone asked if perhaps the word ‘buss’ was pronounced differently than ‘bus.’  What a great question!  It was easy enough to find at the OED.  I wrote the IPA below it in the word sum.   Then I looked up ‘bus’ in the OED and found the identical IPA representation.  Cool. 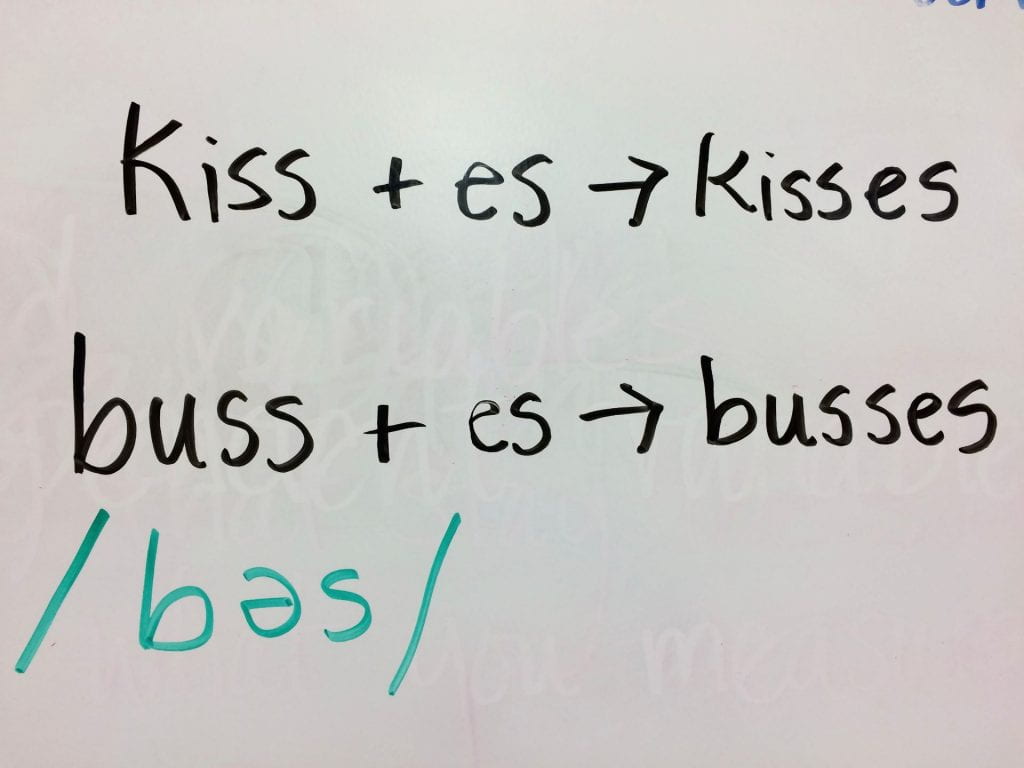 So in the end, we realized that when seeing the word <busses>, a person wouldn’t know whether this was <bus (s) +es –> busses> or if it was <buss + es –> busses>.  In the end the plural forms of each look the same even if the bases aren’t the same.  Interesting stuff!  This takes me back to the Merriam-Webster article that stated that up until 1961, the preferred plural of ‘bus’ in their dictionary was ‘busses.’  After that the preferred spelling became ‘buses’ so these two words would no longer be confused.

If your students are like mine, they will enjoy the humor in the following.

Even if you love your bus, it may look weird for you to buss your bus.
You can give me a hug, but please no busses.
No busses on the bus, unless it’s a buss from your parent. 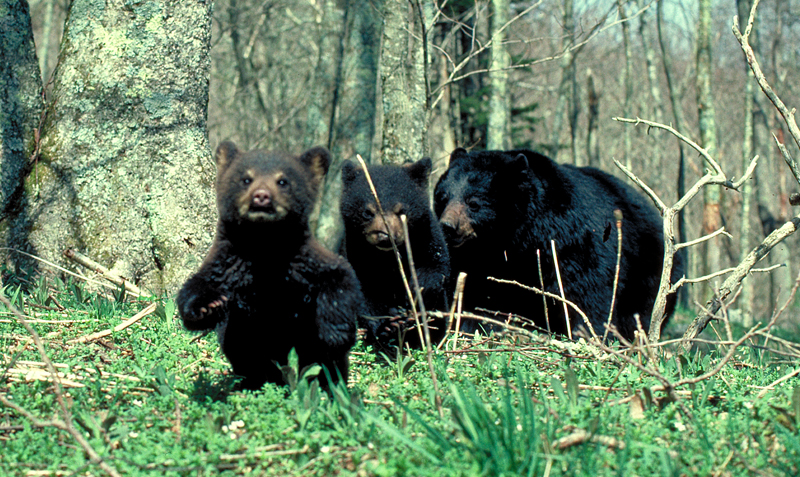 France's Arc de Triomphe Gets A Temporary Artistic Makeover
One of the world's most iconic landmarks just...