Some people have been taught to say that the final <e> is dropped when a vowel suffix is added.  I have switched to saying that the final <e> is replaced.  You might be wondering if it really makes such a big difference to use one word over another.  I think it does, especially with the big picture of what is really happening with that <e>, whether we see it in the final spelling of a word or not.  Let’s head to Etymonline to get a better sense of both of these words.

First off, let’s take a look at that word drop.  It is from Old English.  It has always had a sense of falling.  In the mid 19th century, the things being dropped were sometimes considered immaterial (temperatures, prices).  We still use it in that sense.  But is that final non-syllabic <e> one of those immaterial (unimportant) things to be dropped off a word?  If we begin with the base <bike> and then add the suffix <-ing>, we will end up with the word ‘biking’.  We no longer see the <e>.  If we used the phrase “the <e> has been dropped”, there is a sense that the <e> is now gone.

Now let’s consider the word replace.  It was first attested in the 1590’s and meant “to restore to a previous place or position”.  Using ‘replace’ instead of ‘drop’ leaves us with the sense that the final non-syllabic <e> isn’t EVER permanently gone.  It may get replaced with a suffix, but should the suffix be removed, the <e> is replaced once again.

To demonstrate to my students that I want them to picture that final non-syllabic <e> getting replaced and not dropped, I write a base word on one piece of paper and a vowel suffix on another, like I have in the picture below. 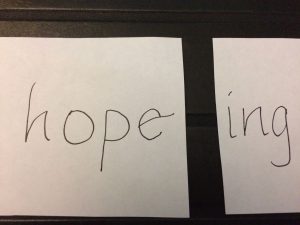 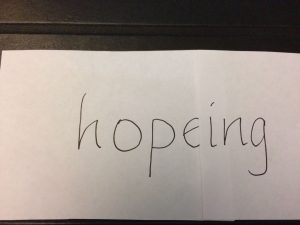 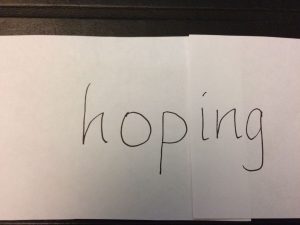 Then I show what happens when I remove the <-ing> suffix.  I slide it away and it is replaced with the final non-syllabic <e>.  I want my students to imagine that the <e> is still there – has been there the whole time, patiently waiting to replace the suffix once it is removed.

Here’s a video that explains this suffixing convention.  Watch how the students act out replacing that final <e>.  There’s nothing like a couple of orthographic superheroes to set us straight!

Once the initial explanation has been presented, it’s important to practice applying this convention with a variety of words.  I like to focus on one base at a time and add different suffixes, verbalizing why we sometimes replace that final <e> and sometimes don’t.  For example, I might put the stem ‘create’ on the board and ask the students to write word sums on their paper for creates, creating, created, and creation.  Then students volunteer to write their word sums on the board.  Once they are on the board, we can talk about them.  Finally, students volunteer to come up and read the word sums out loud, justifying their decision to either replace that final non-syllabic <e> or to leave it.  Here is a video of how that looks:

The other day, a student came up and asked me how to spell ‘unuseful’.  Instead of telling her, I asked, “How do you think it is spelled?”  She responded, “Un – use – ful”.   The fact that she used the structure of the word to help herself spell it, thrilled me more than you can imagine!

2 thoughts on “Drop the ‘e’? Replace the ‘e’? Understanding a Familiar Suffixing Convention”