A new group of fifth graders.
A promise to prove that that spelling makes sense.
Skeptical looks.
An introduction to the matrix.
Smiles and head-nods.
The evidence begins stacking up.

Our mission today was to build a matrix using the base word <hope>.  I began by asking students to suggest words built from that base.  Here is the list we ended up with. 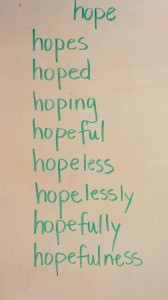 Next I moved to a clear area of the board and wrote the base word.  I spelled it out loud as I wrote it.  I told the students that when working with words on a matrix or in a word sum, we always spell out the base and the affixes.  The look on their faces told me they needed to know why.

I moved to the side and wrote the base <sign> on the board.  I said, “This is a free base.  It is a word by itself.  It does not need an affix to be a word.  If it is used all by itself, how is it pronounced?”  The students read it as you might expect – /saɪn/.  Then I wrote the following word sum:  <sign> + <al>  –> signal.   I said, “Look carefully at what I did.  I added a suffix to the base <sign> and the pronunciation of the base changed!  In the word <sign>, the <g> represents no sound at all.  In the word <signal>, the <g> represents /g/.  Now look what happens when I add the prefix <de> to the same base.”  I wrote the word sum <de> + <sign> and asked someone to tell me what word we just made.  The students now had a look of understanding on their faces when they read the word <design>.  The pronounced /s/ in <sign> was now a pronounced /z/.  Three words.  Three different pronunciations of the base.  No change to the spelling of the base.  We must spell out morphemes until our word is finished.  Then we can look at pronunciation. 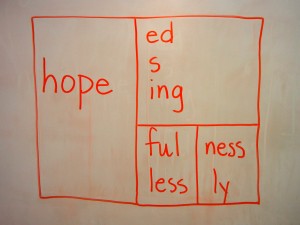 Next it was time to talk about writing word sums.  What you see below would be read as, “h – o – p – e   plus   e – d   is rewritten as   (check the joins) … [at this point the student pauses and checks the places where the two morphemes, in this case a base and a suffix, are being joined.  Because we are adding a vowel suffix, the <e> in <-ed> will replace the final <e> in the base.  The final <e> in the base then gets crossed out and the reading out loud continues.]  … h – o – p –  (no   e)  –  ed.”  It’s important to say “no <e>” because in doing so we are acknowledging that the final <e> on the base is being replaced. The student realizes it is part of the base, and when deconstructing the word <hoped>, that final <e> needs to resurface. 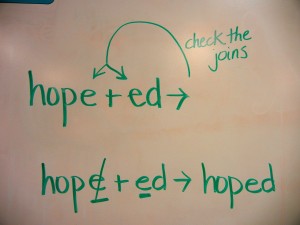 The plot thickens and so does the understanding.

Next I posed this question to the students.  “Why is there only one <l> in <hopefulness> and two in <hopefully>? 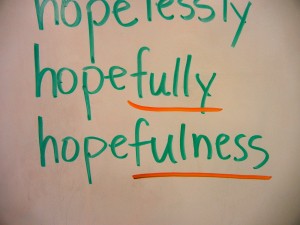 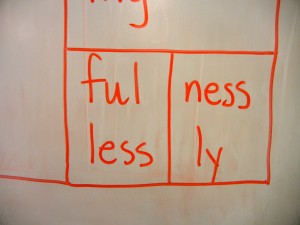 I used this opportunity to ask if anyone ever had to ask themselves if a specific word had one <l> or two.  Many hands went up.  We talked about the difference between the free base word <full> and the suffix <-ful>.  I asked someone to tell me if <really> had one <l> or two.  I said, “This is how you will always know.  Simply ask yourself what the base is.  Then ask yourself what the suffix is.  As you get more and more familiar with suffixes, you will see how they are used over and over with many different bases.  And you will begin to realize that unfamiliar words are often made up of familiar parts.  So far, you’ve been taught to listen to what words sound like.  Now we’re going to add to that and learn to see what words are made of.”

As a final piece I wrote the word <doeing> on the board, pointing out that this was how one of the students had spelled this word yesterday.  I asked, “Why is it logical that this student inserted an <e> into this word?”  The students recognized that there is an <e> in the related word <does>.  I asked for the base of this word and together we built a matrix.  With this example I was again able to reiterate what I had said earlier.  “You don’t ever have to wonder how to spell <doing> again.  Think of what the base is and what the suffix you are adding is.  We don’t randomly add letters and we don’t randomly drop them.” 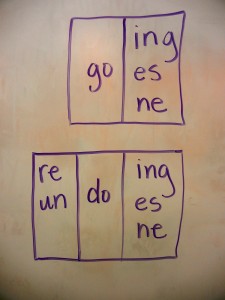 9 thoughts on “You Say Spelling Makes Sense? Show Me.”