Lately, the use of the title ‘doctor’ has come into question.  The wife of our newly elected President has the title of Dr. Biden, and yet she holds no medical license.  She has been accused of using the title to give herself fake importance.  Is it fake though?  Where does this practice of granting people this title come from?  What does it take to be a doctor?  Can anyone be one?  As usual, we need to look into the story of this word.  How long has it been in use?  Has it always indicated a person with medical knowledge?  When did it refer to others with particular knowledge in their respective fields as well?

I started at Etymonline and found that the word doctor was first attested c. 1300 and spelled doctour.  At the time it was used to mean “Church father.”  Before that it was used in Old French where it came directly from Medieval Latin doctor meaning “religious teacher, advisor, scholar.”  In Classical Latin it was used to mean “teacher.”

So far the only tie to a specific area of knowledge is that of religion.  I went to the OED (Oxford English Dictionary) and found examples of this word in use.  In the late 1300’s saints were known as doctors.  In one example, a saint was known as a doctor of truth.  In an example from the mid-1500’s, Christ Jesus was referred to as the heavenly doctor.  And in the mid-1600’s a person was referred to as a doctor of divinity, while another a doctor of theology.

Around this same time, the sense of this word broadened to include other areas beyond religion.  Notice this definition listed at Etymonline.

Look at that!  Since the late 14th century, we as a society have been referring to people who hold the highest degree in a university as doctor.  I looked back at the OED to verify this with actual examples and found that in the late 1600’s there was a person given the title of “Doctor of Music.”  An excerpt from roughly a hundred years later mentions someone being named a “Doctor of Laws.”  But as I continue to scroll through the entry, I find that people were called doctors of law as early as 1377!  The noun ‘doctorate’ as in the degree of learning earned is from the 1670’s.  This is not new, and it is not a fake title!

It is interesting to look at the possible roots of this word and see that they include things like “enchanter, one who speaks magic words, healer, physician, charmer, exorcist, one who counsels, and conjurer.”   This speaks to the attitudes and perceptions regarding medicine as the field grew, doesn’t it?  It may be difficult to separate the idea of a leech being a physician from the idea of a leech being a bloodsucking aquatic worm, but according to Etymonline they were indeed two separate words with distinctive uses.  One (worm) became assimilated to the other (physician) by way of folk etymology.  (Folk etymology is a popular but mistaken account of the origin of a word or phrase.)  Here are some interesting compound words I found at the OED.

Leech-fee …  a physician’s fee
Leech-house … a hospital
Leechman … a physician
Leech-finger … what we typically refer to as our ring finger.  Old English spelling was læcefinger.  It was translated from Latin digitus medicus which was in turn transcribed from Greek δακτυλος ιατρικος.  It was called that because it was believed that this finger had a vein that stretched to the heart.

Apparently this term narrowed in its use to refer only to veterinary practices until the 17th century when it slowly became archaic.  What a great example of how the people who speak the language determining by their use of words which ones stay and which ones fall out of use!  If you are wondering where the connection is between physicians and the use of leeches as a medicinal practice, that wasn’t attested until 1802.  In my own mind, I thought it was earlier than that, but I’m probably thinking of the related practice of bloodletting which happened much earlier.

If we renew our focus on the word ‘doctor’, and note its root of docere “to know, teach, cause to know,” we’ll recognize the following related words.

doctor – a person who holds a doctorate.
doctorate – the highest degree awarded by a graduate school or other approved educational organization.
doctoral – relating to achieving a doctorate.
doctiloquent – this word is rare but one I enjoy.  It describes one who speaks learnedly.

doctrine – beliefs held and taught by a church, political party or other group.
indoctrinate – teach someone to accept a set of beliefs uncritically.
doctrinaire – someone who seeks to impose a doctrine without regard to practical considerations.
doctress – female doctor.  Becoming less common as woman-doctor becomes more common.

docile – ready to accept control or instruction; submissive.
docility – this word began as “readiness or aptness to learn”, but since the 1600’s has meant “submissiveness to management.”
docent – a person who acts as a guide in a museum, art gallery, or zoo.
document – written work that provides information or evidence that serves as an official record. 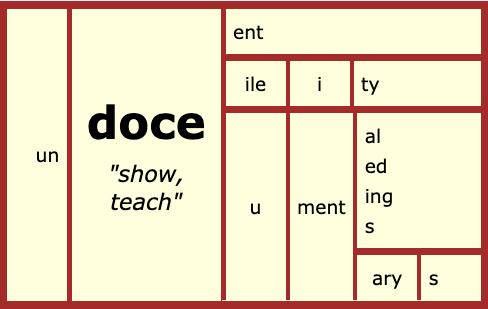 Back to where this started …

Dr. Biden holds two masters degrees and a doctorate in educational leadership.  Since the late 14th century, that kind of commitment to learning has earned a person the title of  ‘doctor’.  Granted, it probably didn’t include women back then, but we’re past that part, aren’t we?  It can take between four and six years to complete a doctorate.  That is in addition to the time it takes to get a masters.  Many countries require a masters before one can study for a doctorate.  The U.S. has been changing that requirement in recent years, but you can see that Dr. Biden earned two masters degrees before earning her doctorate.