Today we focused on the importance of a word sum, and how a word sum is to be read. I picked the base element <joy> to work with because I was confident that  the students would be able to brainstorm a list of words that are morphological relatives of <joy>.  A morphological relative shares the spelling of the base and the denotation (is from the same etymological root).

As the students thought of words, I wrote them in a column to the right. When we had a good sized list, I asked if anyone could give me a word sum for one of the words. At this point, I emphasized that the base element was <joy> and could not be made smaller without losing its sense and meaning. I compared writing a word as a word sum to splitting a spelling into syllables. Syllables carry no meaning, but morphemes do. Syllables may or may not help you with pronunciation, but a word sum will always help you understand a word’s meaning. You will find words written as syllables in most dictionaries. There is no internet site or dictionary that lists word sums.  Word sums have to be reasoned out by you!

This last bit is extremely important.  Students are used to finding answers in books or on the internet.  They are used to answer keys with which to check their work.  At first they feel confused by word sum hypotheses.  That happens because they have not been exposed to enough word sums.  With time, they begin to notice patterns and recognizable clues which in turn help them write a more likely initial word sum hypothesis.  Through experience working with word sums, they better understand that all words have structure. They become less nervous in proposing a word sum hypothesis and instead are actually excited at the prospect.  Some of my past 5th grade students have said that proposing word sum hypotheses was one of their favorite parts of orthography!

As the students hypothesized each word as a word sum, I wrote the word sum along with the ‘is rewritten’ arrow to the left of each word. That way I had the full word sum represented for each word. 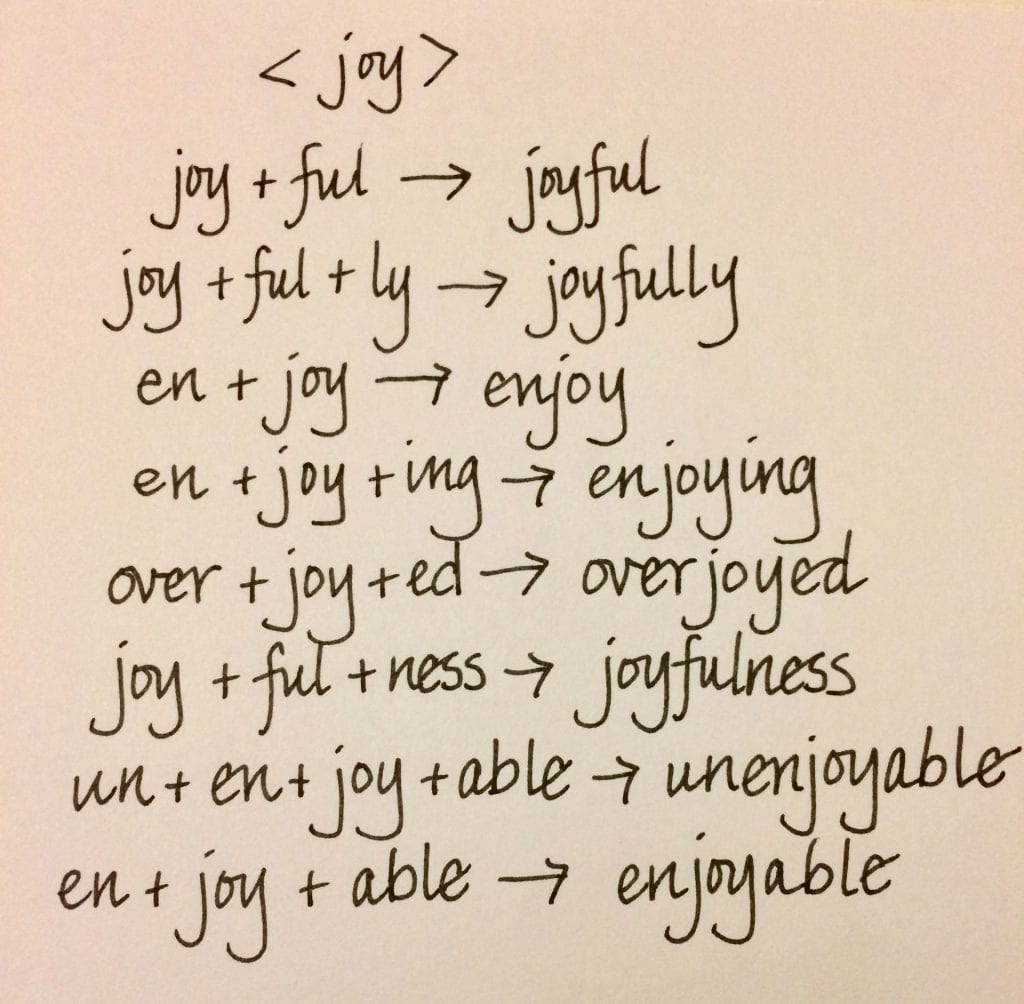 Next I modeled how I wanted each word sum read. I’ll use the first word as an example: <j..o..y  plus  ful  is rewritten as  j..o..y  (pause)  ful> … joyful.  The natural tendency was to pronounce the elements as if they were words. Changing that tendency was part of what today’s practice was all about.  We don’t pronounce elements until until the word is complete.  Since a word sum is a visual representation of the composing of a word, nothing is ready to be pronounced because the word is not completed.  Everything is spelled out.  I also encourage the students to announce the spelling of the suffixes a bit quicker than they do the spelling of the base elements.  I want them to think of the suffixes that they will be seeing often as recognizable units.  I want them to rattle off, for instance, suffixes such as <-ing>, <-ed>, <-ous>, <-ly>, and <-ic>.  Then when they are in the midst of spelling a word on paper, the spelling of that suffix is in their head and there is less chance of leaving a letter off.

A few other things came up as we looked over this list.  We talked about the difference in spelling between <-ful> the suffix and <full> the free base word.  I introduced the idea of announcing the suffix <-ness> as <n..e..double s>.  It was also an introduction to looking at what each element in a word sum contributed to the overall sense and meaning of the completed word.

I showed them a chart that would be at the board to remind them of the types of elements we might see in a word sum.  I pointed out that bases and affixes are written morphemes.  In the first few weeks of school, we have been talking about the difference between a base that is free and a base that is bound.  The students will be investigating twin bases later in the year.  Since the students (in groups of 2-3) have already begun investigating science words, we have also talked a bit about everything else on this poster.  Each small group is investigating a word similar in structure to <biosphere>.  Each word is compound with <sphere> as its second base.  Each word also has a connecting vowel – in this case an <o> because one or both bases in their compound word are Hellenic (from Greek). 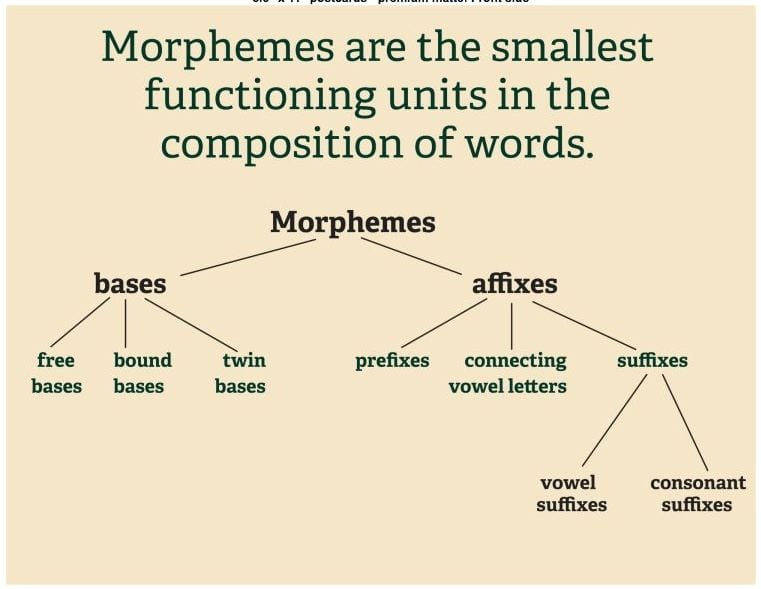 I started at one end of the room, and asked each student to read a word sum and finish by pronouncing the completed word. When we came to the bottom of the list, we started over.  In that way, every child was able to individually read a word sum. In listening to the readings, the process became familiar to all.  This is a practice I will continue doing throughout the year when we collect any list of morphological relatives.  Hearing themselves announce the word sum will help this idea of a word sum become part of what they understand about all words.   When they are writing and asking themselves how to spell <really>, I want them to remember that the base is <real> and they are adding the suffix <ly> to it to form the word <really>.

A few students inadvertently said “equals” instead of “is rewritten as” when they saw the arrow. That was a great opportunity to compare a word sum to a math equation and to point out the use of “sum” in our use of “word sum”.

I also used this opportunity to talk about the difference between a synthetic word sum and an analytic word sum. I pointed to the poster card I now have on my board to remind them of these new terms and what they mean. (Check out the store tab on my blog if you are interested in a set of my cards. 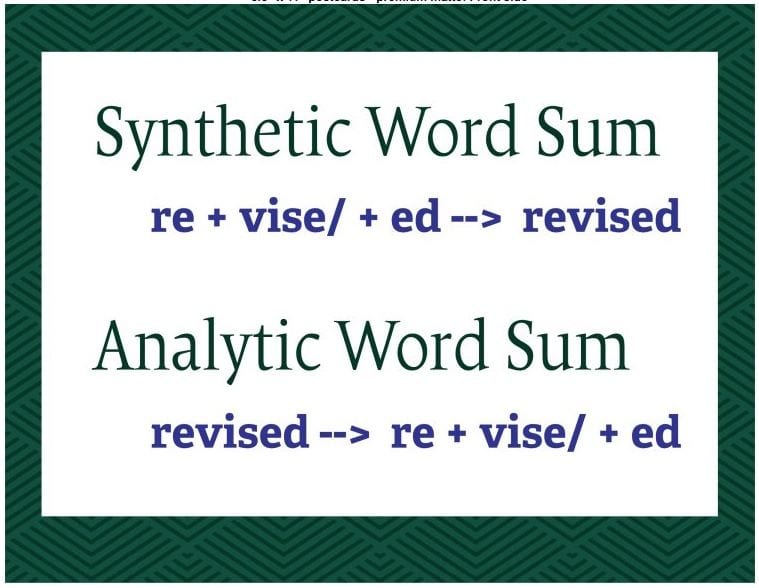 I told my students that my goal is for them to spell a word by its morphemes.  I want to replace the often torturous memorization of “letter letter letter” type sequences with knowing that a word has, for instance, a base <joy>, a suffix <ful>, and another suffix <ly>.  This will not be accomplished by sounding out words, but rather by learning about structure and repeatedly seeing and using some common affixes and bases.

The students enjoyed this activity and asked if we could do it again sometime.  Yes.  We can and will do it many many times!  I promise!