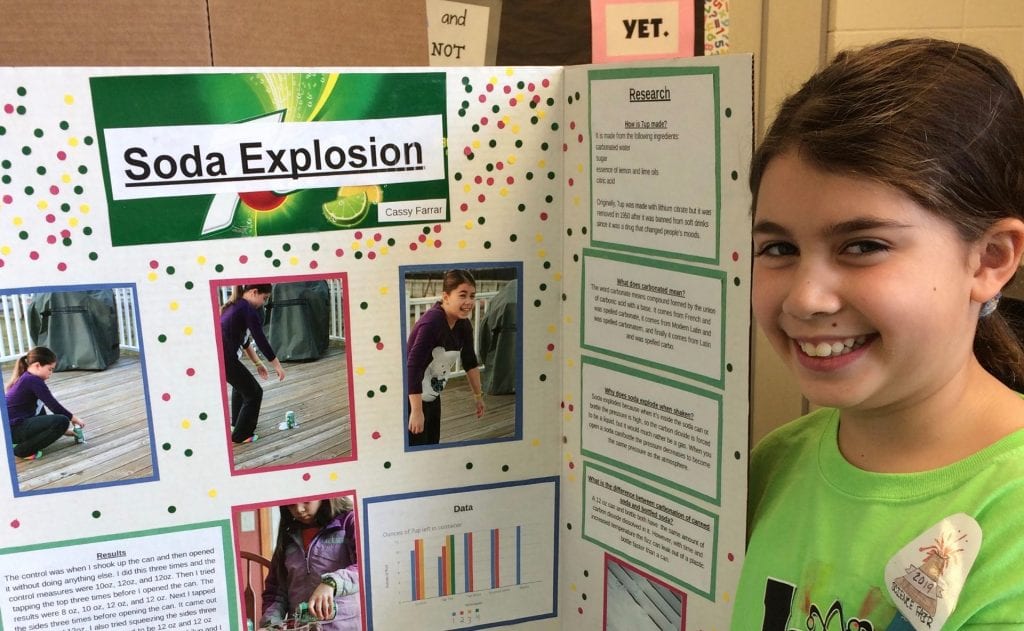 Look at that smile!  There’s a new layer of confidence built into that smile.  There is an amazing sense of accomplishment right behind it, a head full of experiment-inspired questions in the brain above it, and a heart that beats with pride below it.

Each student’s eyes have been opened in a way that only understanding something for yourself can do.  Those same eyes spent the evening looking with earnestness into the eyes of listening adults in an effort to connect with them in a scholarly way.  And from this day forward, those same eyes are ready to see many things in the world around them with a fresh and wondering engagement. 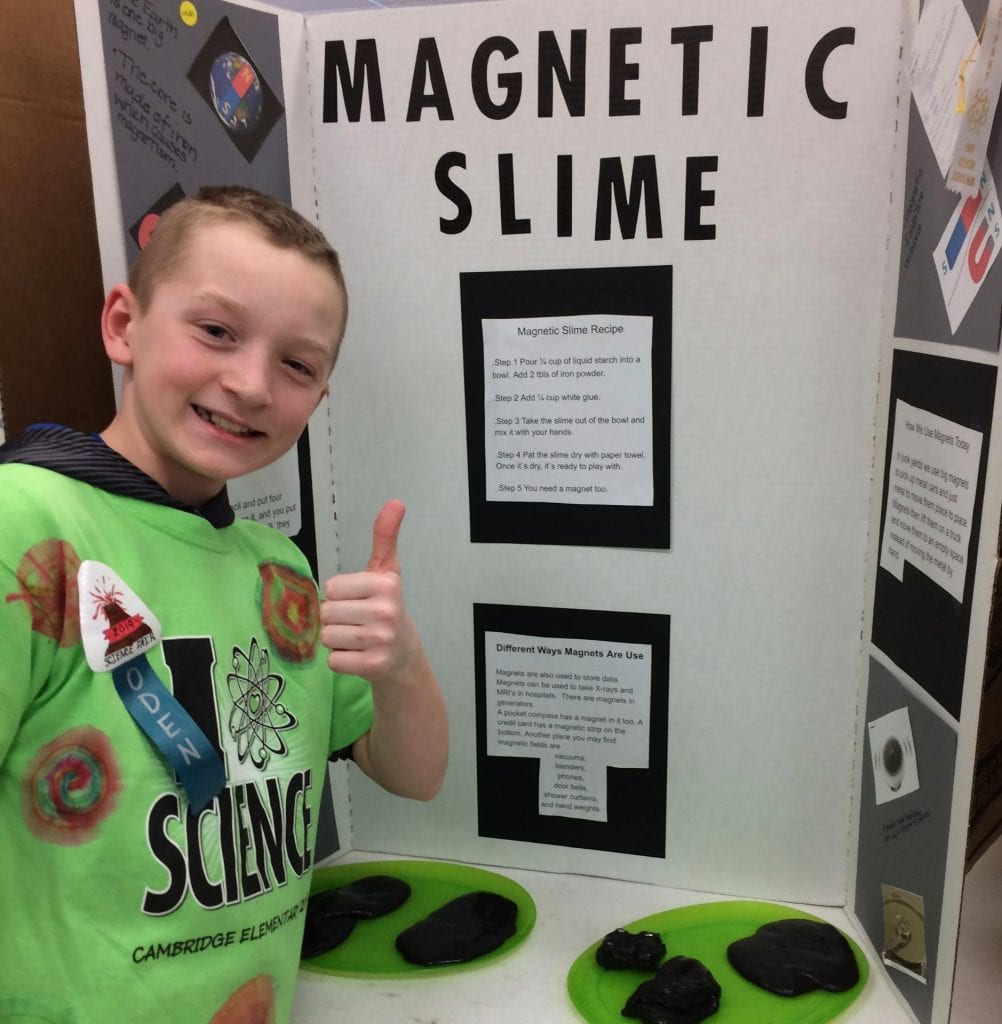 Yes, their feet hurt from standing so much of the day.  That was expected.  But their cheeks also were sore.  They were sore from smiling and laughing with their classmates – their friends.  For this was a bonding experience.  They didn’t realize it until the day of the fair when each could see that the others worked just as hard, did just as much research, put in just as much time, and were just as excited to share their project as they were.  Their Science Fair t shirts further identified them as members of the fifth grade scientific community.  The name badges they each wore (so that their assigned VIP could find them) were designed by the students.  The advertisements found around the school were designed by the students.  This was their Fair.  This was their celebration.  This was their moment to be the teachers, the guides, the knowledgeable ones.  And they loved it. 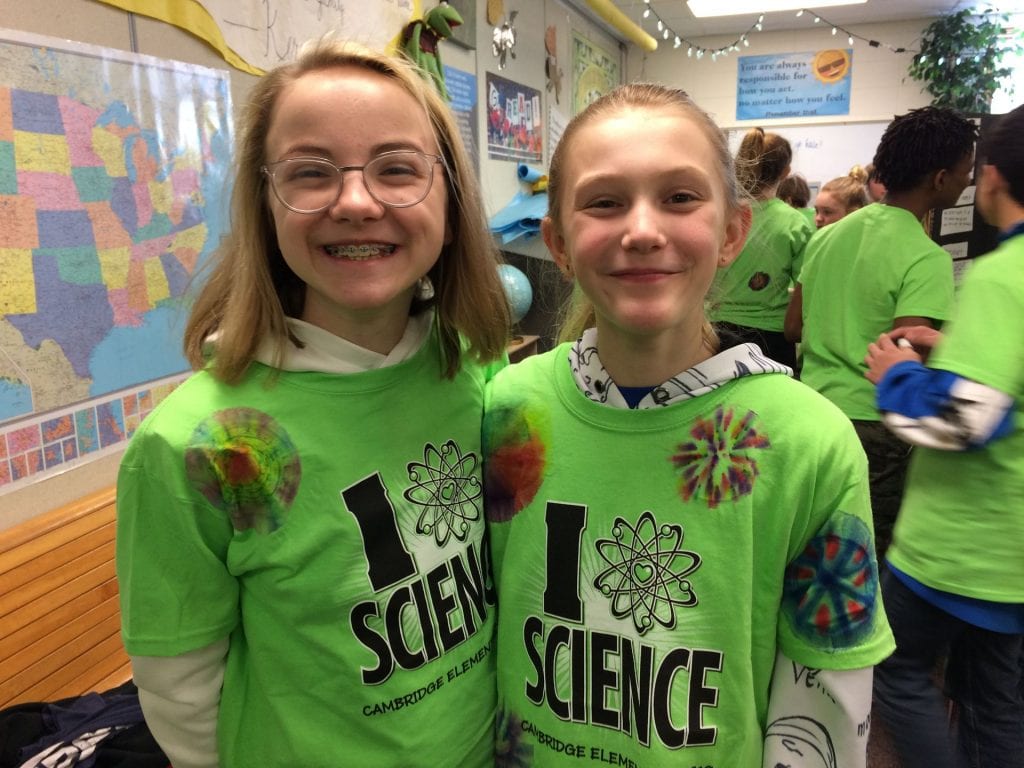 Like any multi-step weeks long project, the experience has changed these children.  It changed the way they see each other.  It changed the way they see themselves.  They did this thing – this experiment – this thing they thought they could not do.  And it wasn’t until the last week when they were typing up everything and making graphs and putting together their Science Fair Posterboards that they realized how worthy their project was and how excited (but still a bit scared) that they were to share it. 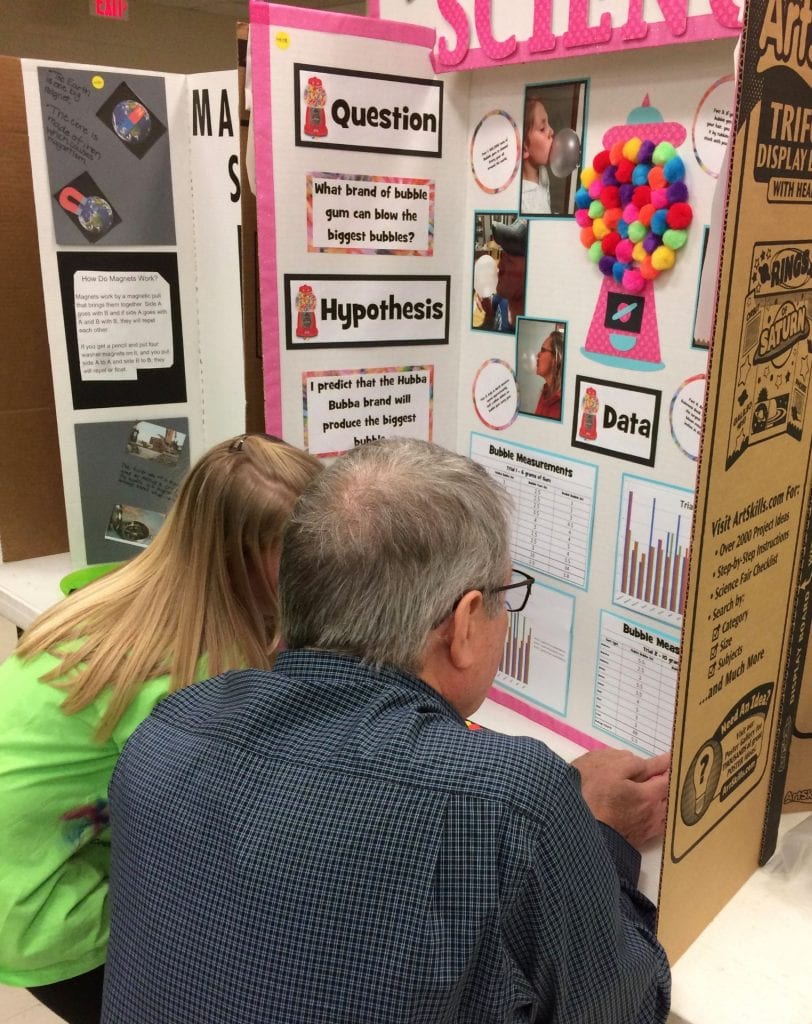 Yes, for some students there were unpleasant moments during the first two weeks of turning in journals (required in order to keep me updated on progress and/or answering questions).  I’m sure that a few parents needed to nudge in the early and middle stages as well.  But this is a project that gets more interesting the more research you do and the further along you get.  By the third week, students not only handed in their journal on their assigned day, they also stopped to tell me how much fun they were having and what was happening!  (Since I am the science teacher to all fifth grade students, I collect journals from one homeroom on Tuesdays, from another on Wednesdays, and from the last on Thursdays.  That way I can keep up with reading and commenting in each journal.  As you can imagine, it is imperative that the students get feedback, encouragement, and guidance throughout this project.)

One student shared that in her case, she learned that sometimes your experiment needs to be redesigned. She was interested in whether or not cats have a dominant paw, similar to how people have either a right hand or left hand preference.  She sat down and thought of five tests she would carry out with three of their cats.  She would do each test 30 times with each cat and then look at the data.  The next week, her journal had that plan crossed out and a new plan written in of testing only two cats (a male and a female) a reduced number of tests.  I asked her what made her change her plan.  “My cats won’t do it!  I had to change to something two of my cats will actually do!” 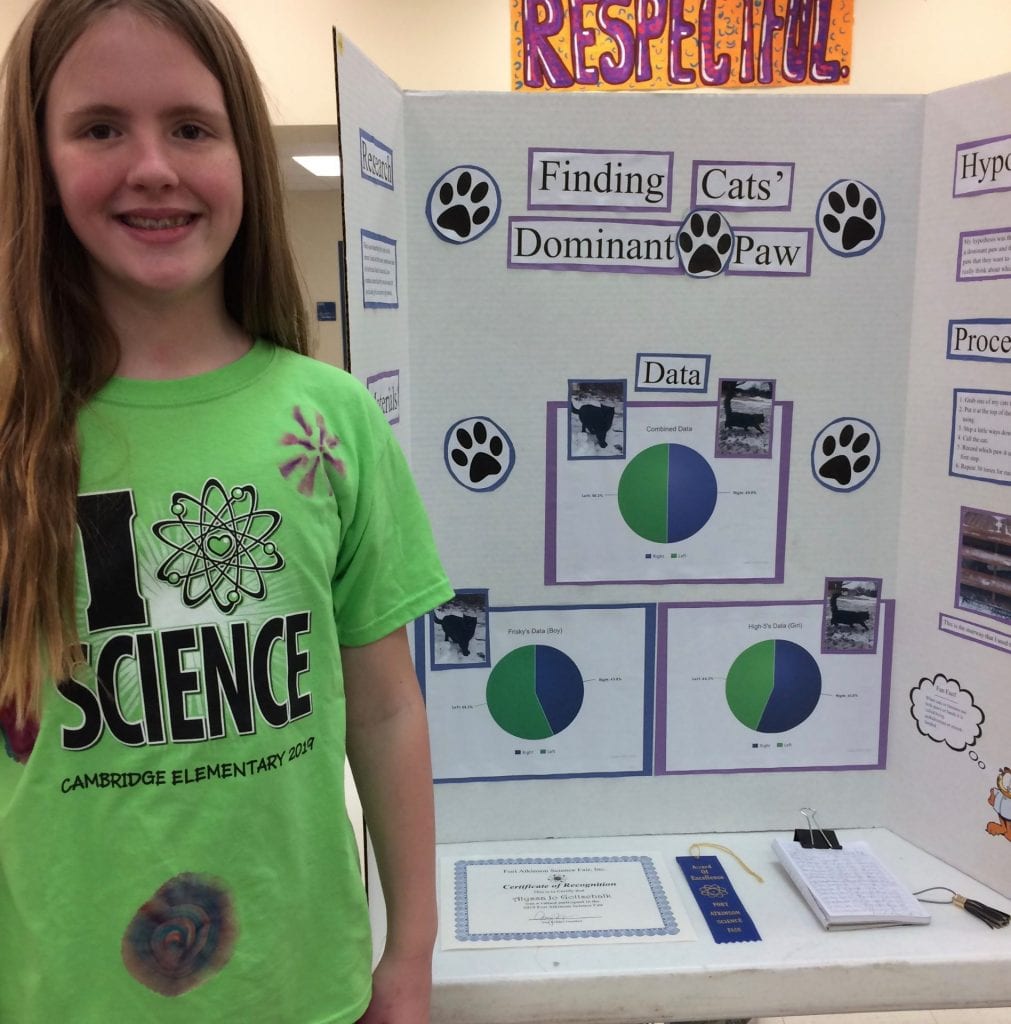 In the end, she was disappointed that her cats wouldn’t cooperate with her original plan.  She was also disappointed that her results didn’t clearly answer her original question.  Or rather, she was disappointed that her findings showed that neither cat had a decidedly dominant paw.  She felt as if her project was a failure.  But it wasn’t!  Not at all!  Her project was one of my favorites because it gave us so much to talk about!  Having to redesign is part of what scientists do when they realize that the first design is unrealistic as it applies to the situation.  Then we talked about the time frame her project would need if she were to collect the kind and amount of data that would satisfy a scientist probing this very question.  Having tested only two cats, she simply hadn’t collected enough data to know for sure if gender was a factor or if a number of other cats would test the same. She decided she’d have to test many males and the same number of females.  The more data collected, the better.  That would take much more time than the five week time frame we worked with would have allowed.  Because of her experience, this student now has a better understanding of what a true scientific investigation would look like!

As I was making my way around and looking at each Science Fair presentation, I found this gem on someone’s board.  I’d say this student received some wonderful advice from her wise parents! 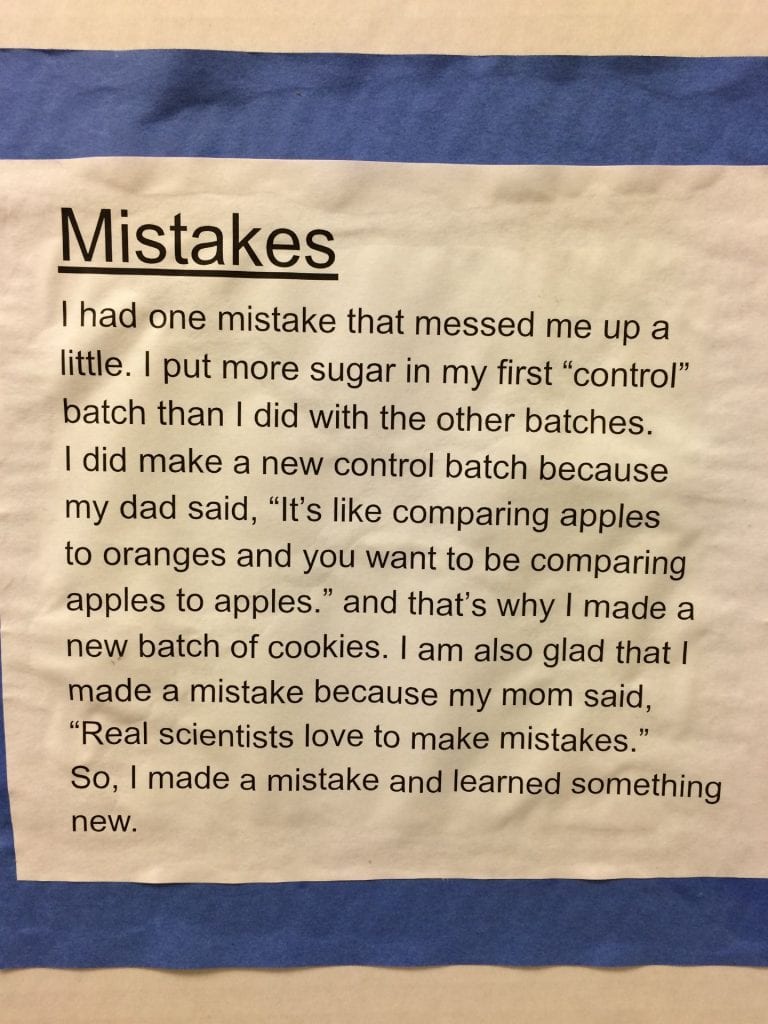 So many of the parents helped in this way.  They nudged when they needed to, encouraged throughout, supported the thinking their child was doing, and made sure their child had the materials to complete the project.  For many it was an opportunity to share ideas for problem solving and reinforcement of following a procedure.  The students who had that parent/guardian help were lucky indeed.  Check out this student’s hydraulic claw!

I love the Science Fair.  I can never predict who will shine brightly in the end.  Students take their project where they are willing to take their project.  Some dig deeper than others.  In the end, (no matter how much help others claim a particular parent did), it is the student standing there explaining and defending the evidence collected and the findings.  It is the student that has learned that following a protocol, applying consistent effort,  researching their topic, collecting data, and making observations yields results that are reliable and credible.  And when you have results that are reliable and credible, people are interested in what you have to say.  My students now believe in themselves a bit more than before.  I truly believe that.  Check out the video below and see if you don’t agree with me!  This, my friends, is what memorable learning looks like!