I don’t remember the first time I heard A Christmas Carol.  It has just always been a part of my life.  We watched it together as a family every year.  We listened to it  on the record player when we were doing Saturday cleaning.  At some random moment, one of my brothers would throw out a line from it and we would all join in retelling the story using the words Dickens wrote.  It was fun to see how far we could go at certain sections of the story.  Our favorite sections were the exchange between Ebenezer Scrooge and Bob Cratchit at the beginning, the visit from Jacob Marley, and the exchange between Scrooge and Cratchit at the end.  But there were plenty of one liners that made it into our daily life as well.  If one of us was going somewhere new and my mom asked if we knew where the place was, you might hear, “Recollect it?  Why I could walk it blindfold!”  And then there is the cherished children’s book my mom wrote, called The Five Little Fuzziwigs.  (Fezziwig was Scrooge’s first boss).  This story is truly part of who I am.  Oh, look!  A Christmas card from my childhood! 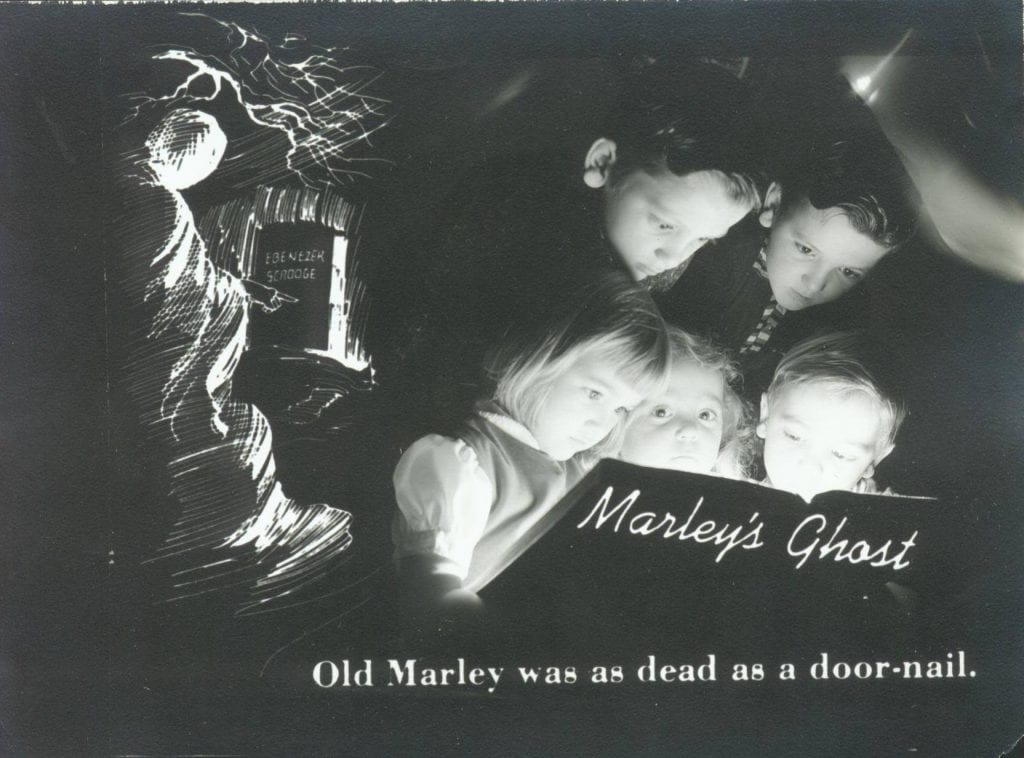 And because I grew up so familiar with the words and phrasings of Charles Dickens, I find it especially fun to read this story aloud at this time of the year.  My favorite copy is a book that belonged to one of my grandfather’s brothers.  My grandfather had 15 siblings, and my Uncle Izzy had a full collection of the writings of Charles Dickens! You can see that this book is old and well loved. 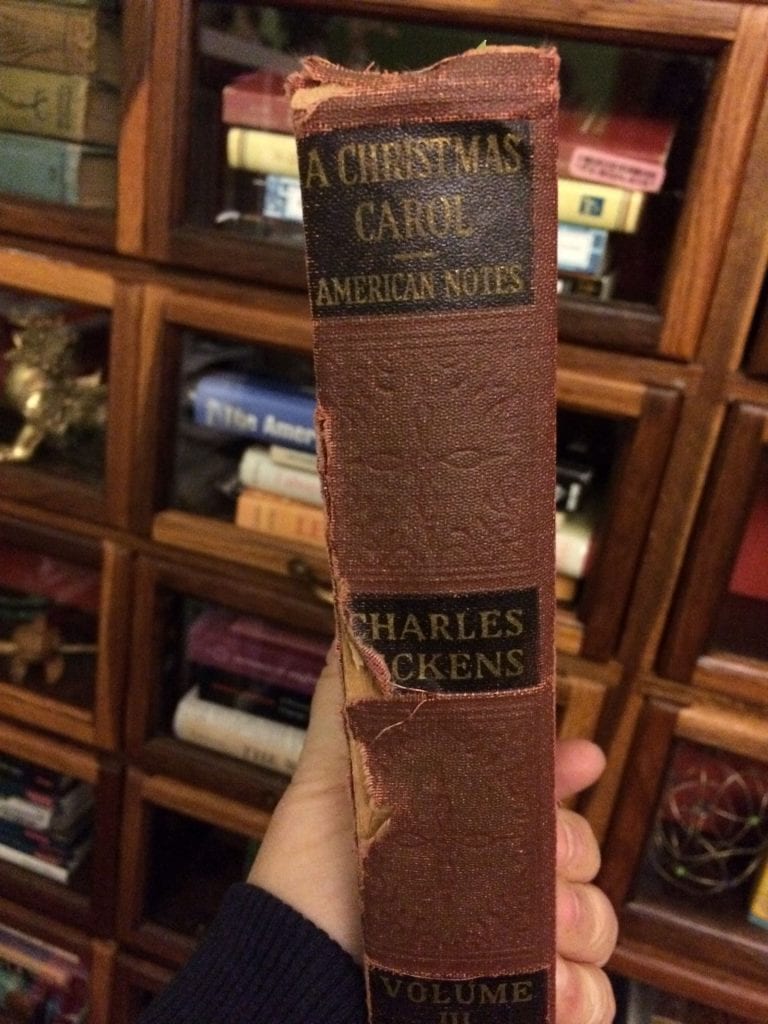 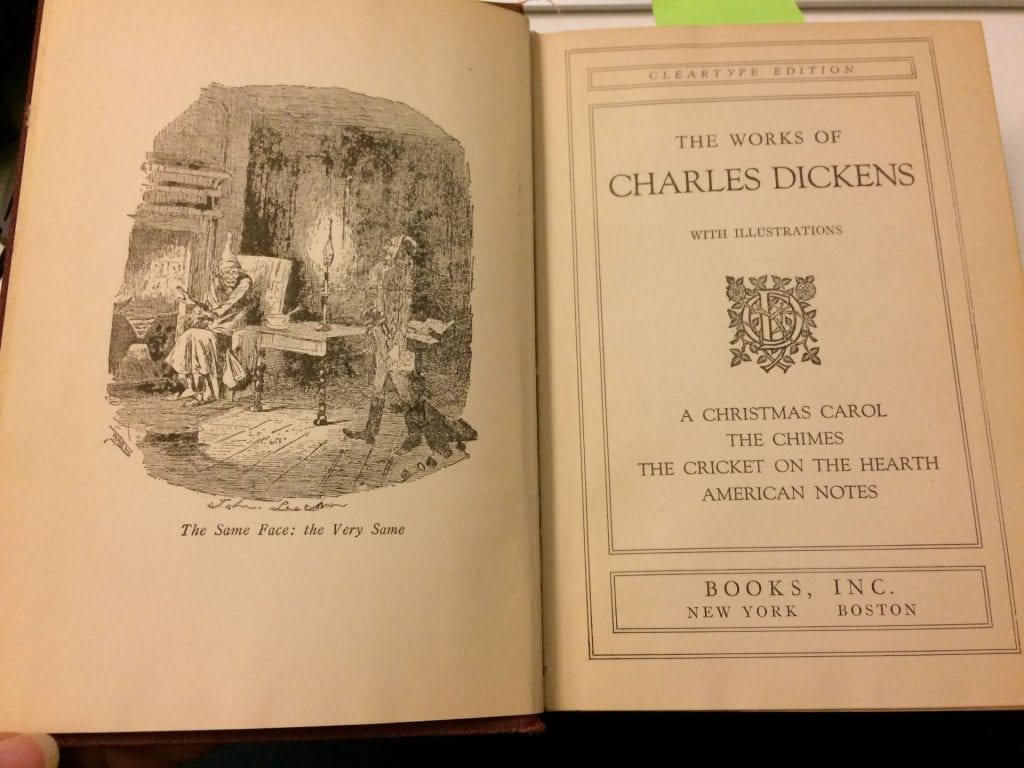 I started the story about two weeks ago and read about 20-30 minutes each day.  That included pauses to discuss the action, the rich vocabulary that might stump my listeners, and the differences between life in 1843 and 2018.  If you are at all familiar with the writing of Charles Dickens, you will wonder how fifth grade students handled the rich vocabulary.  Well, I decided not to talk specifically about every word they might not know.  Some of the words are used in such a way that they create a tone and mood, and the students could feel it as I read.  Other times when the word was being used more than once such as melancholy, countenance, and situation, we stopped for a quick definition.  In the case of “situation”, it was being used in an unfamiliar way, yet the students figured out that it referred to a person’s job.  I find it fascinating that Dickens uses so many different words to refer to a ghost, and we talked about that.  Besides ghost, he uses spectre, shade, apparition, and spirit.  As I read each day, I invited students to sketch the action or characters in the story.  Sketching was optional of course, but many enjoyed doing so.  When I was finished for the day, we reviewed the main actions, and then the students taped their sketches to the cupboard at the back of the room.

The sketches are delightful!  The students quite obviously captured the feelings of the characters.  AND the drawings of the three ghosts reflected the descriptions as Charles Dickens wrote them.  A few students recognized this story from a movie version they saw and I was wondering whether or not that would affect the way they imagined the ghosts. 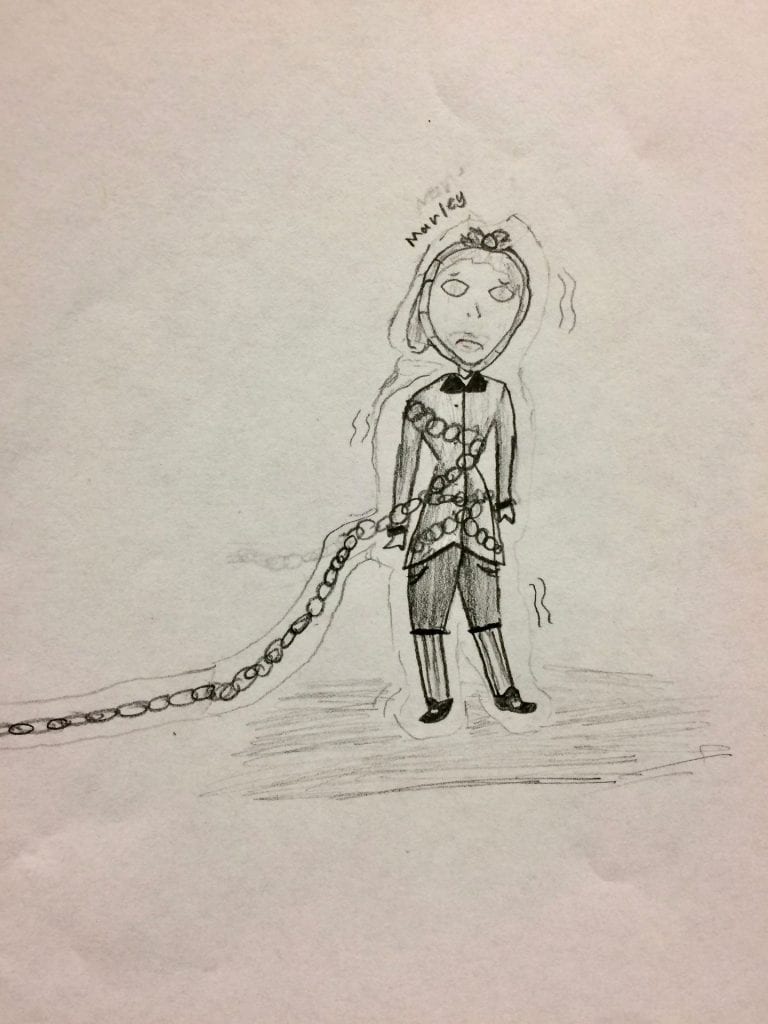 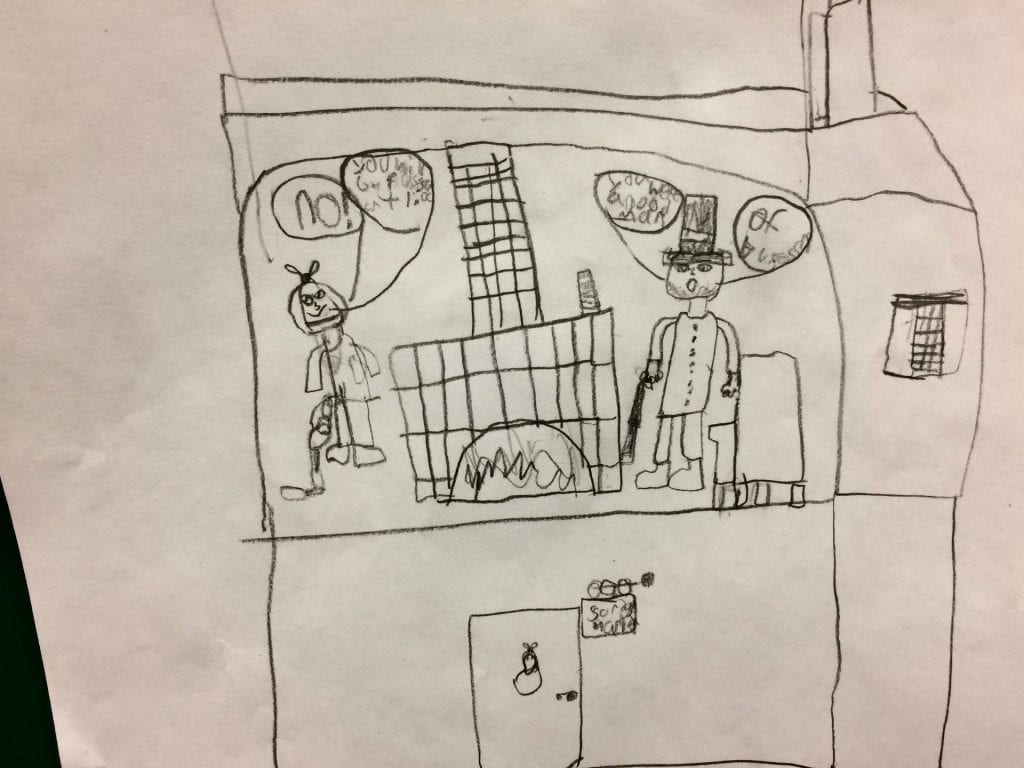 It is difficult to read, but Scrooge is saying to Marley, “You were a man of business.” and Marley is saying to Scrooge, “No!  You will be visited at 1:00!”  I love the fact that this student recognized that they would be on the second floor of Scrooges home and that there would be a knocker on the front door!  Such cool details! 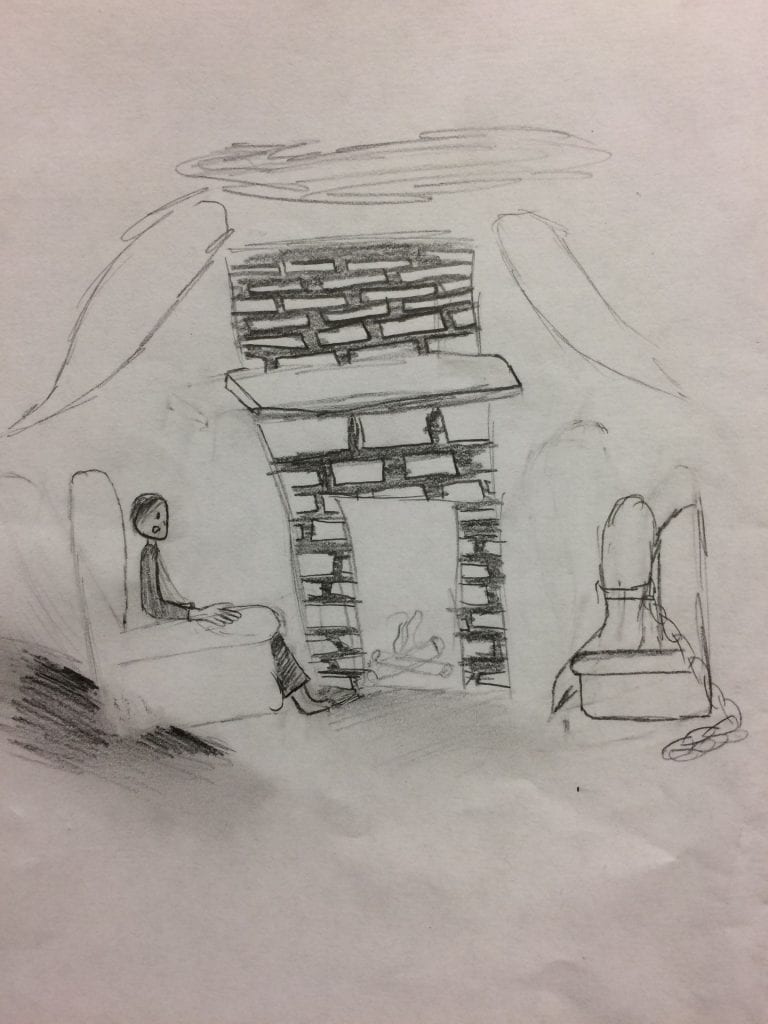 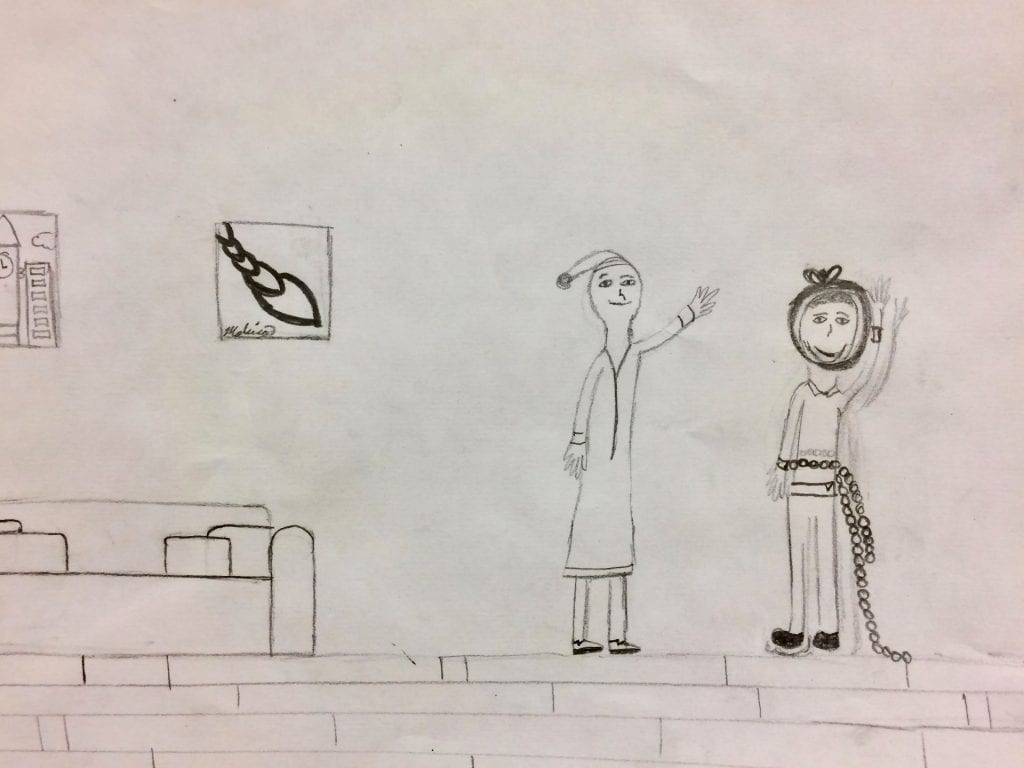 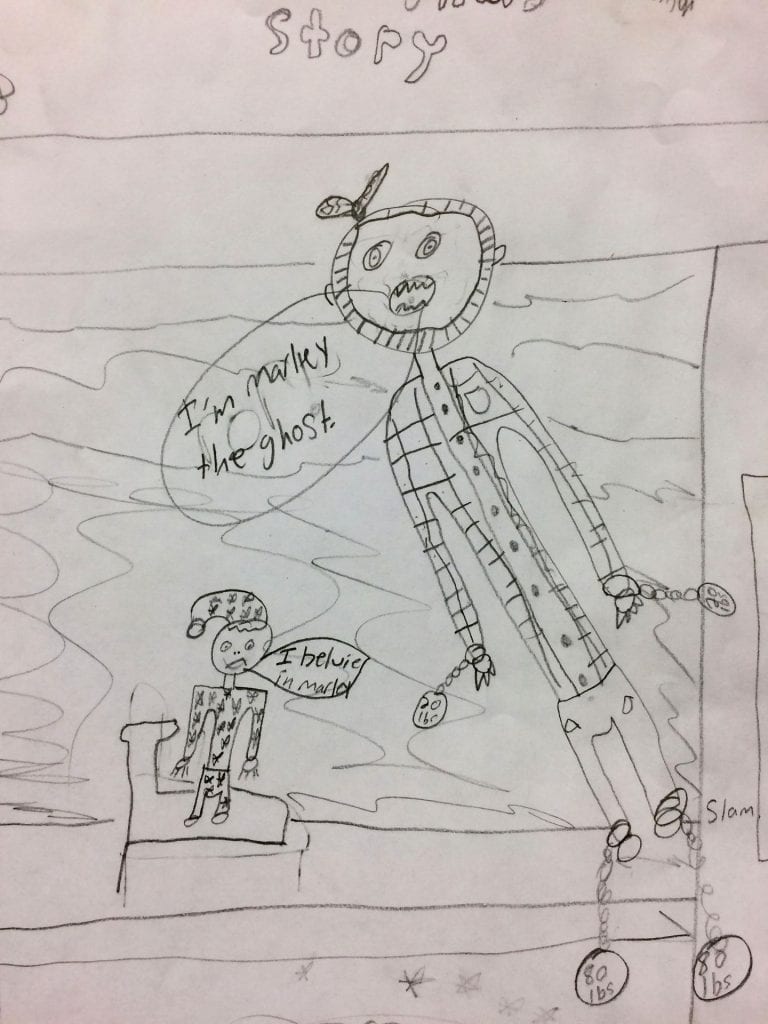 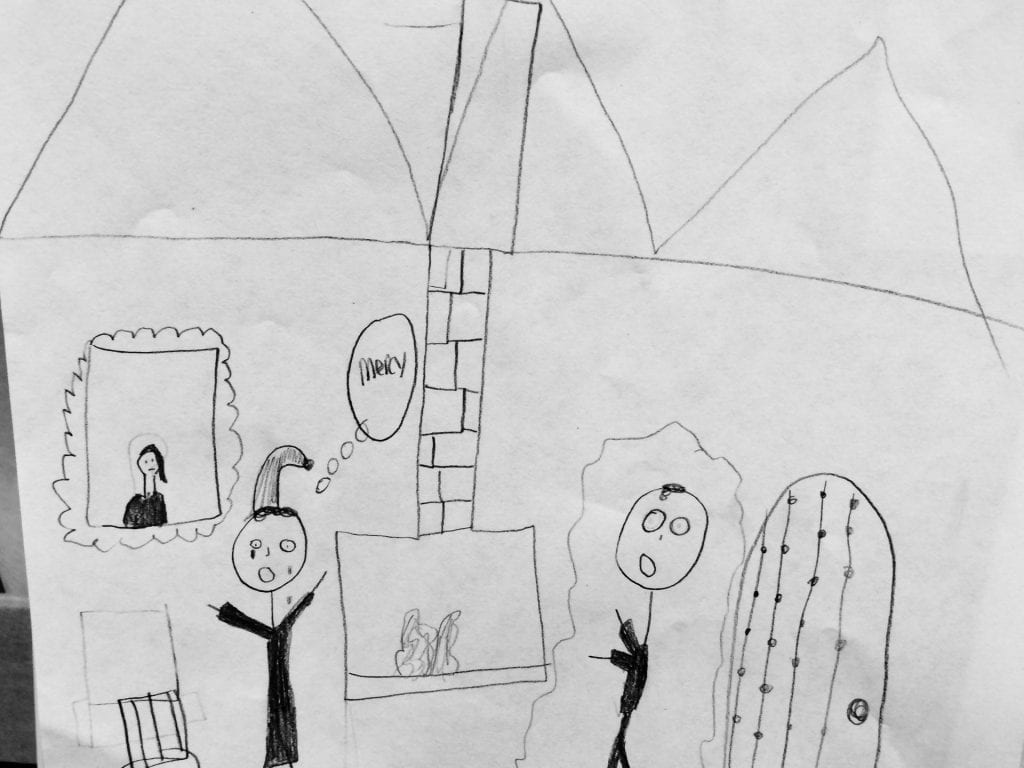 The Ghost of Christmas Past is described by Dickens as having summer flowers trimming its tunic.  It is also described as being able to change, similar to the Cheshire Cat does in Alice in Wonderland.  “For as its belt sparkled and glittered now in one part and now in another, and what was light one instant, at another time was dark, so the figure itself fluctuated in its distinctness:  being now a thing with one arm, now with one leg, now with twenty legs, now a pair of legs without a head, now a head without a body: of which dissolving parts, no outline would be visible in the dense gloom wherein they melted away.  And in the very wonder of this, it would be itself again; distinct and clear as ever.”  Several of the sketches reflect these things in clever ways! 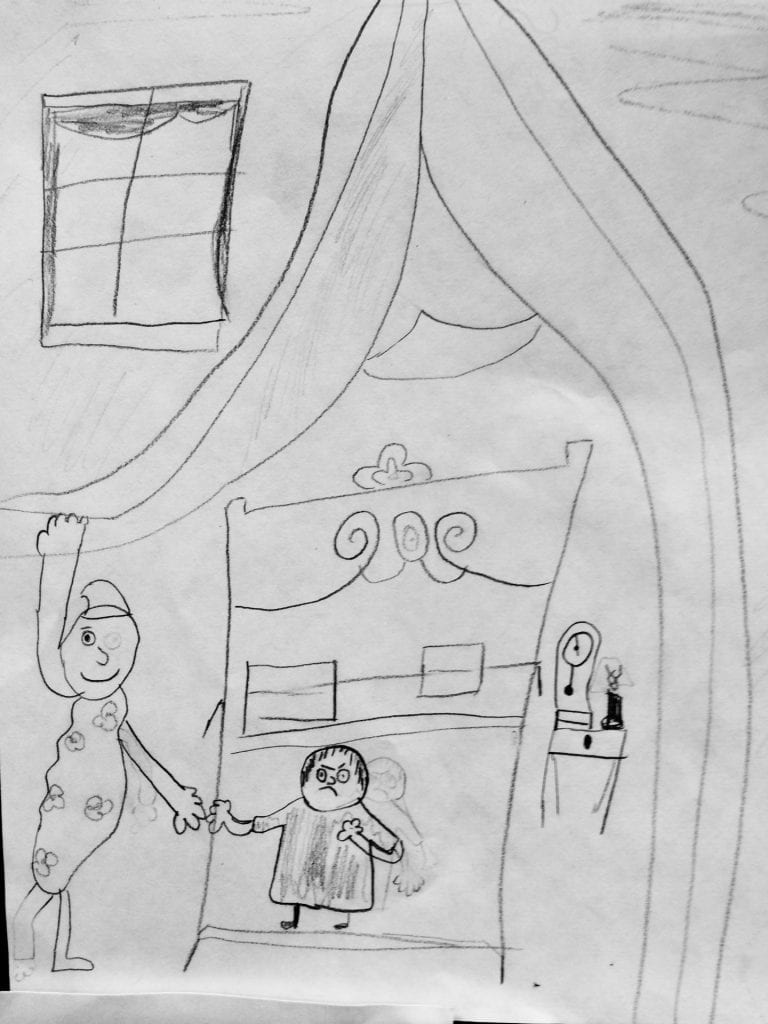 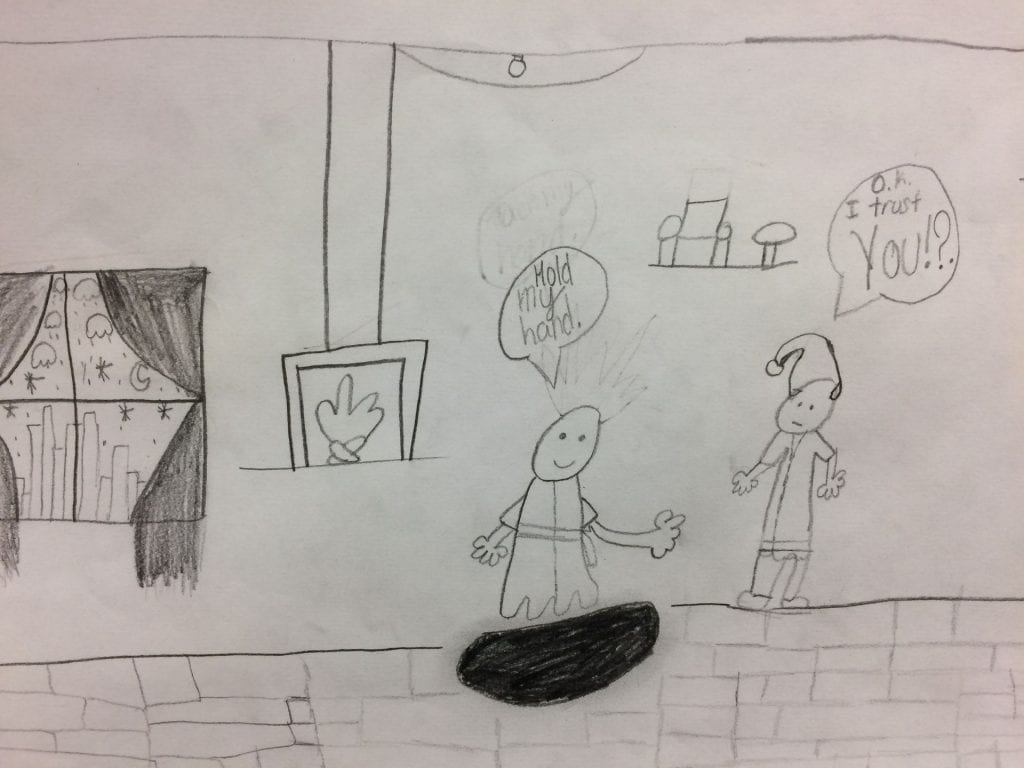 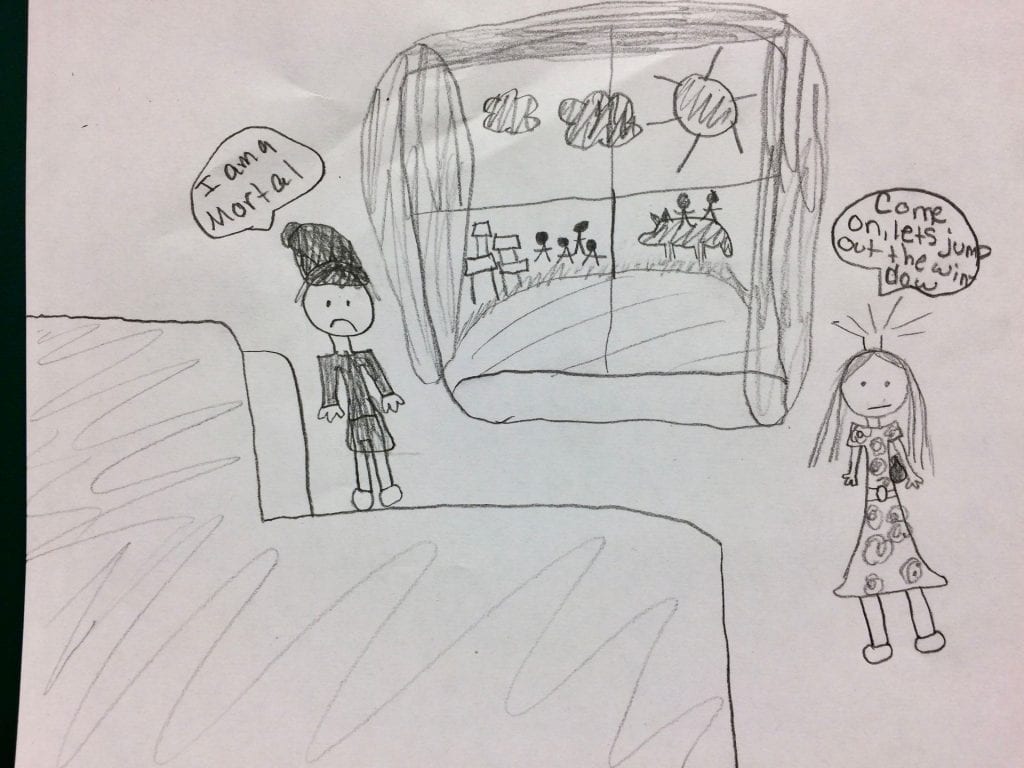 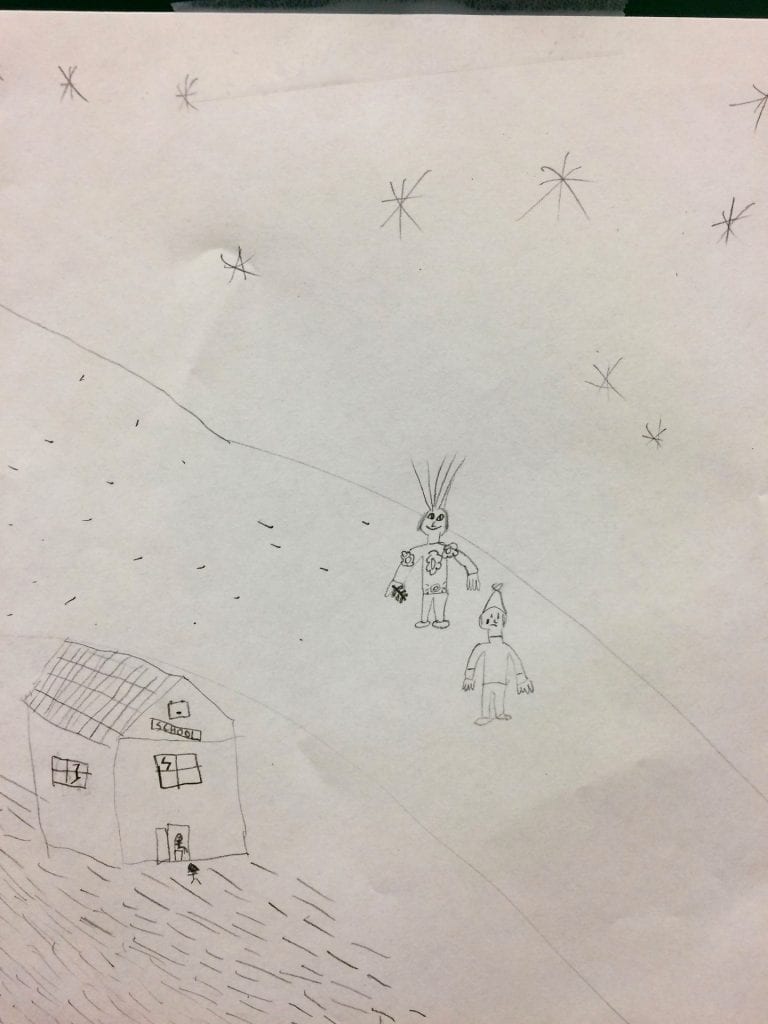 The next set of sketches is from one of the memories shown to Scrooge by the Ghost of Christmas Past.  It is where Ebenezer and his fiance are breaking it off.  She recognizes that he loves money and earning it more than he loves her.  Look for the “money eye” in the second picture! 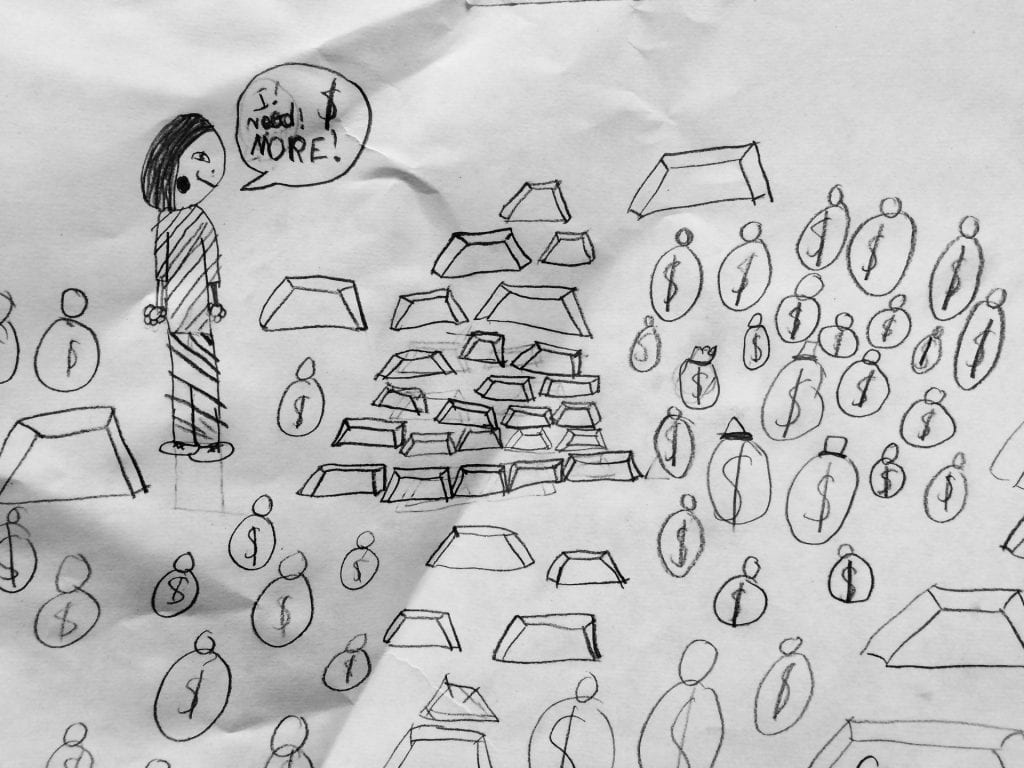 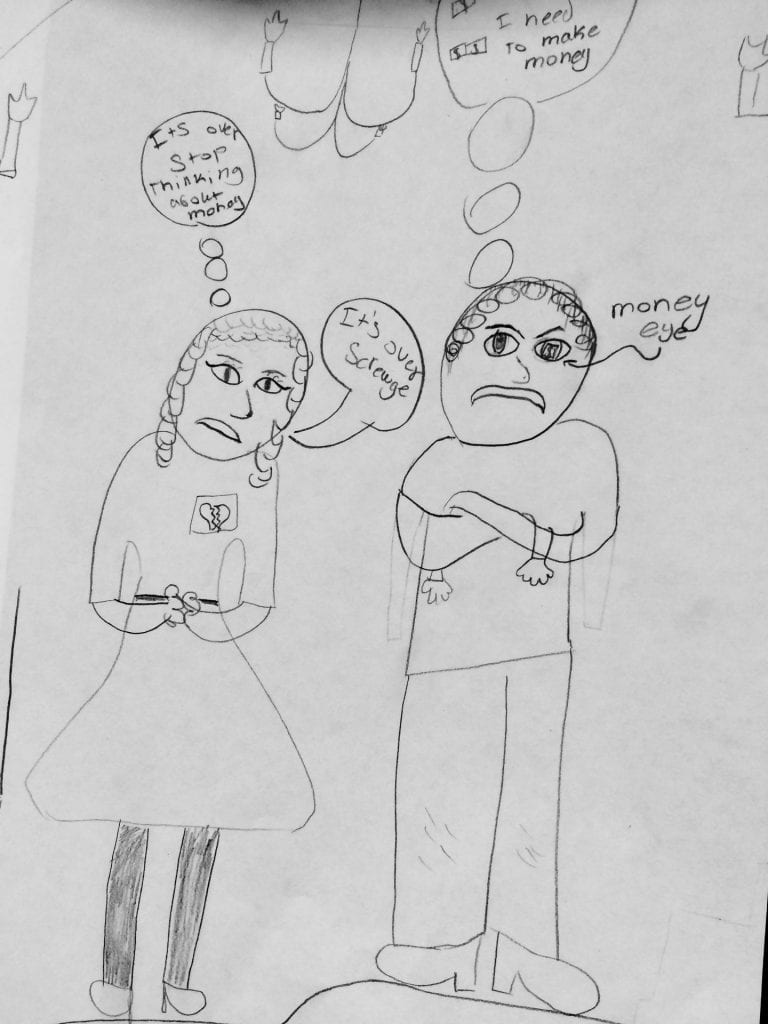 The last set is of the Ghost of Christmas Present. 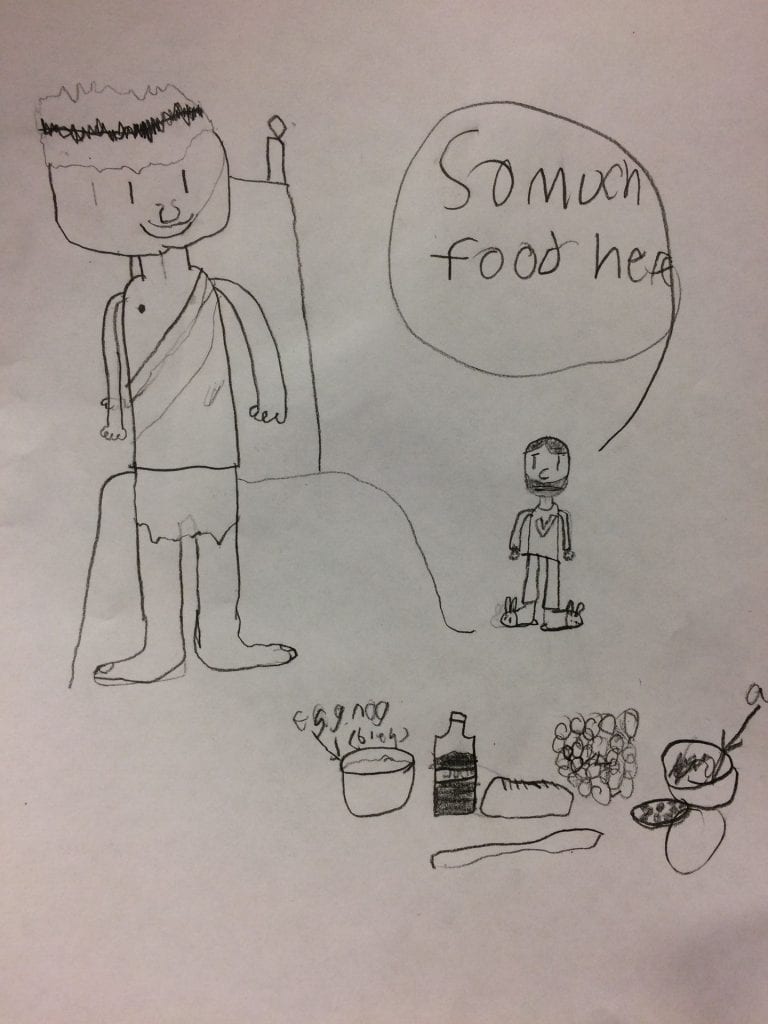 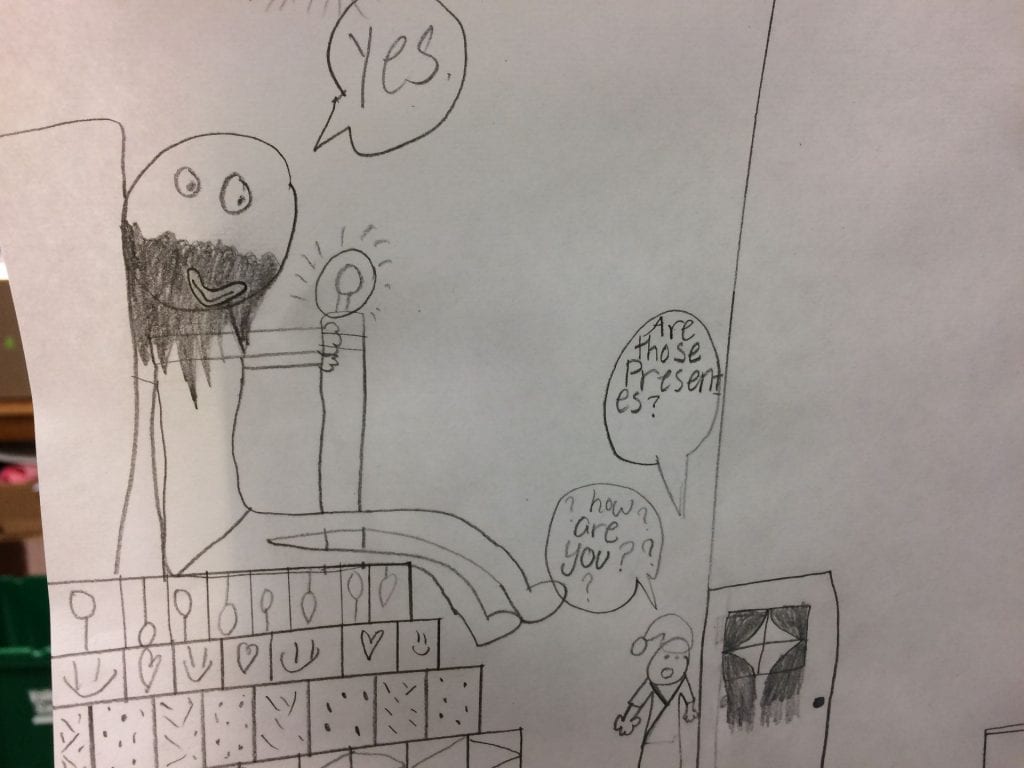 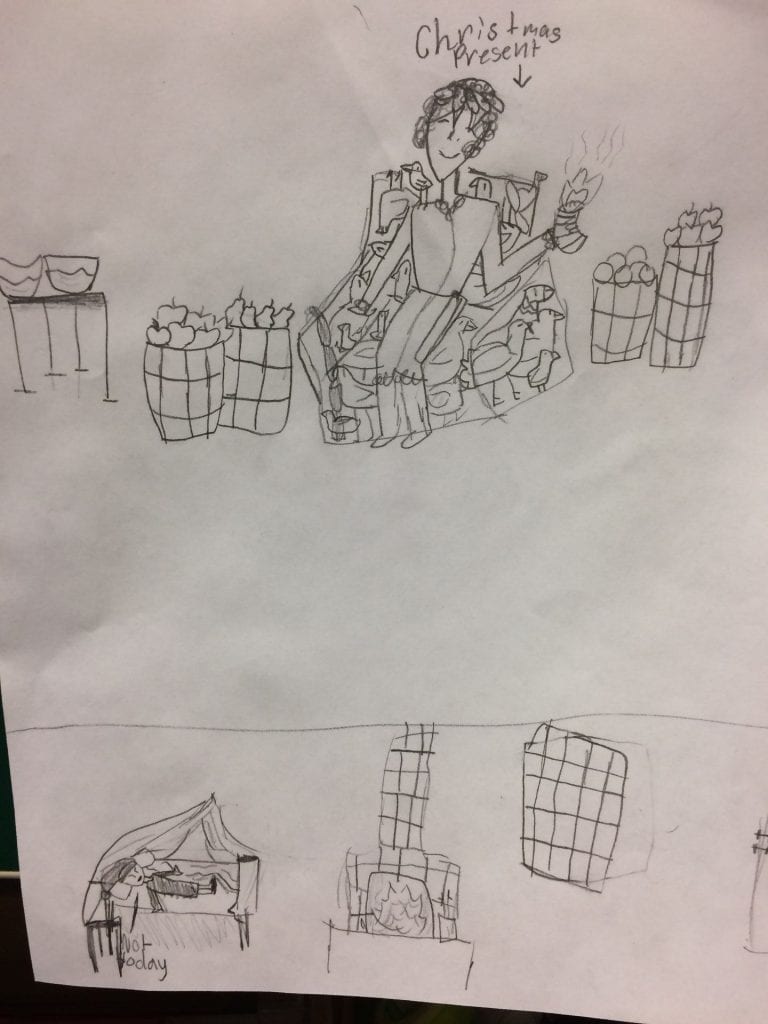 By day 4 and 5, I made scripts available to the students.  Again, this was an optional activity.  They could find a partner once their regular work was done and practice.  I was so pleased with the number of students who participated in the script reading!  I brought my video camera and taped each group.  Then I created a video.  It’s a composite of the groups who read to the class.

The children had so much fun with what might at first be considered a story that is way beyond their lexile level.  I’m so glad they now know this story, and that they have been introduced to Charles Dickens.  I’m glad they were able to read parts of it themselves and feel the words and phrasings of Dickens in their own mouths.   My mom introduced this book and story to me at a very young age.  She didn’t sit me down and drill me on the vocabulary beforehand.  She let me experience the words in their context.  She encouraged playful discourse among my siblings and me.  And when I was ready to understand and asked about a word I didn’t understand, she happily discussed it with me.  When we were only one day away from finishing the story, a student raised her hand and said, “”I know you’re reading the story, but it doesn’t sound like that. I mean, I can see the book, so I know you’re reading it, but it sounds more like you’re just telling it to us.”  Isn’t that the best?  I credit my mom with teaching me to love a story.

Oh!  One last treat.  Every year I make Jib Jabs for my students.  This year the Jib Jab site had a retelling of A Christmas Carol and I couldn’t resist.  This one includes the teachers who work with the fifth grade students at my school.  Use this link to view it.  It is very short, yet hilarious!

A Christmas Carol – the Jib Jab one minute version. 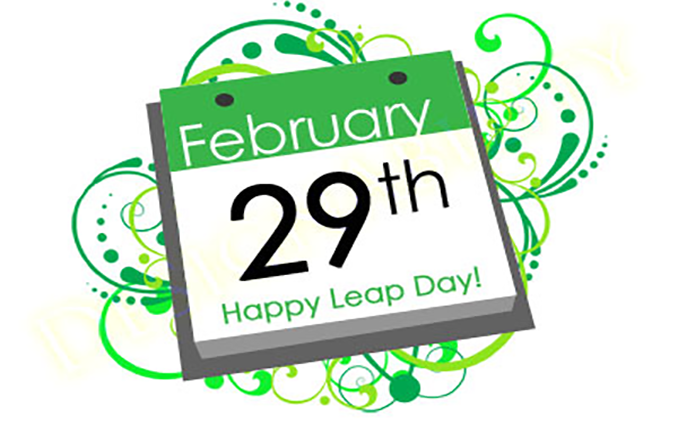 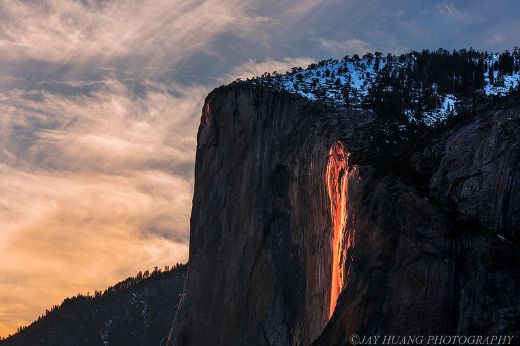 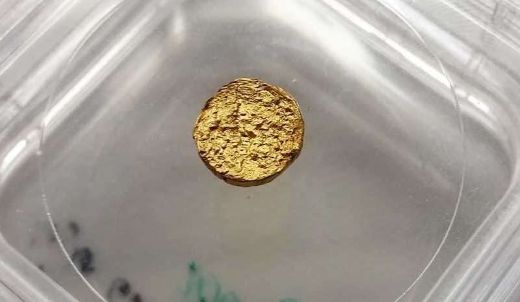 Scientists Use Plastic To Create Lightweight 18-Carat Gold
While jewelry crafted from gold can be gorgeous, e... 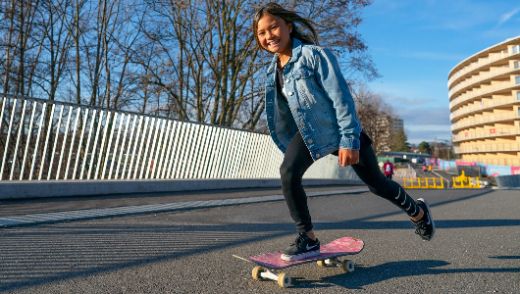 11-Year-Old Skateboarding Phenom Sky Brown May Be Heading To The 2020 Tokyo Summer Olympics
At first sight, Sky Brown may appear to be like an... 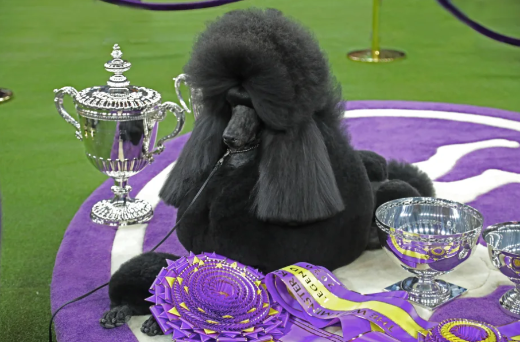