What makes a suffix a suffix?  Seems like an easy question.  As part of my “beginning of the year assessment of their understanding”, I asked my students just that.  This is what they had to say:

Interesting.  They understand a bit, yet aren’t very sure of what they know.  Seems like the perfect time to offer a challenge.  A suffix challenge.

The students are placed in small groups of 2-3.  Their task is to list a suffix and think of three words that have that suffix.  The goal is to list as many suffixes as they can in the time given, each with three example words.  As part of introducing this activity, I use the following example on the board.

Usually someone notices that in the word ‘dress’, the final <s> is really part of the spelling of the word.  It is not a suffix.  Perfect.  So as they begin this task, they are keeping in mind the difference between the final <s> in dress and the final <s> in pencils.  They recognize that while ‘dolls’ and ‘pencils’ are good examples of an <-s> suffix, ‘dress’ is not.  They are ready to begin.

When they ask where they will find these suffixes, I suggest they pull a book off the shelf.  It doesn’t have to be any specific book, just a book with words.  As they skim the text, looking at the words, they will recognize a word with a suffix.  And that is what happens.  After 20 minutes, we stop for the day.

The next day, they have 30 minutes.  Part of what they are to do this day is to print the information they have gathered on a piece of construction paper so that others may easily read it.   Then I collect the sheets.  Here are some examples of how they looked. 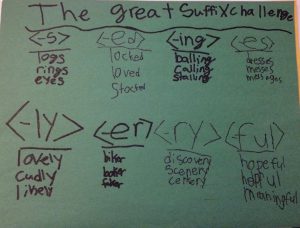 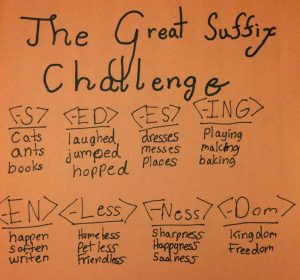 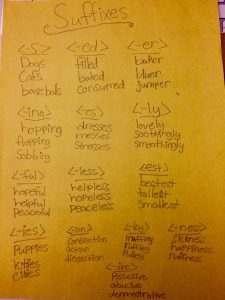 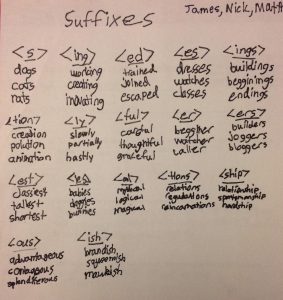 On the third day, I handed these sheets out, making sure that they didn’t go to the group that created them.  I also handed out a recording sheet.  They were to record the suffixes they felt were proven, and those they questioned.  They were also to list words that didn’t seem to have the suffix that was listed.  Here is an example of the recording sheet. 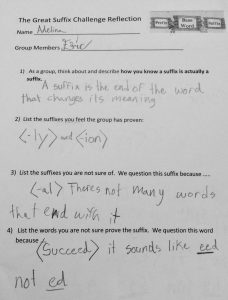 As the groups looked over the lists of suffixes, I circulated with my camera, catching the conversations within the groups.  Here’s a snippet of what I heard.

I really enjoy this activity.  I love hearing the students share their thoughts with their group members.  I become so aware of what they do and don’t understand about suffixes and the suffixing conventions.  I get a sense of which students have no understanding of a suffix.  These are the students who list one or two of the last letters of a word and call it a suffix.  I also get a sense of which students recognize suffixes in their reading and can easily list fifteen or more.  It’s a great beginning of the year assessment piece.  I will do this again mid year and see how understandings are progressing!

As a follow up, I asked students to tell me about suffixes they questioned.  I wrote them on the board.  We talked about the example words given and decided whether or not we felt the suffix had been proven in those words.  These discussions took off in the directions they needed to.  We talked about replacing the final <e> when adding a vowel suffix, but also having that <e> become visible once more should the vowel suffix be removed.  We talked about suffixal constructions – meaning the joining of two or more suffixes.  I could tell that this idea – that words have structure – was beginning to take hold in many of the students’ minds.

We began the next class with some history of the word ‘suffix’.

It is also interesting to note that the <suf-> prefix is an assimilated form of <sub->.  They are the same suffix, but with alternate spellings.

“Why was another spelling needed?” I wondered aloud to my class.  “Let’s try this to see if we can understand why another spelling was needed.  Everyone pronounce the word as if the <sub-> prefix was used instead of <suf->.”  When everyone had said the word ‘subfix’ at least twice, I asked everyone to repeat it about five times in a row.  Then I asked if anyone noticed a change taking place.

Several said, all at once, “I started out saying ‘subfix’, but I ended up saying ‘suffix’.”

“Exactly.  As you were pronouncing the word, you automatically sought to make the last letter of the prefix <sub-> more similar to the first letter of the base <fix>.  The result was suffix.  That is called assimilation. ”

Now it was time to watch a video made by my students a few years ago.  It is called Can You Prove It?  It is a game show in which the two contestants are given words.  They have to decide what the suffix is and to provide evidence to support their choice.

Following the video, I wrote the word ‘motion’ on the board along with its word sum.  I know that this idea of a bound base is extremely new, so I wanted to show them how common this one in particular is.  I wrote <motion –> mote + ion>.  Then I asked if anyone knew why I put the <e> after the <t>.  One student thought it was marking the pronunciation of the <o>.

“Great! It is!  But there is another reason, as well!”  No one had any ideas, so I wrote the word sum without the <e>.  Beneath it I wrote the word sum for ‘hop’.  I pointed out the similarity between these two morphemes.  They each had a final consonant which was preceded by a single vowel.  When I asked what the final spelling for <hop + ing> would be, they knew the <p> would be doubled.  I was trying to draw a parallel and to show that adding a vowel suffix to *<mot> would force the same kind of doubling.  And we all knew that the word ‘motion’ had only one <t>.  So, to prevent the <t> from being doubled, there needed to be a final <e> on the bound base <mote>.  I also showed them that when we added a vowel suffix to ‘hope’, the <e> prevented the <p> from doubling. 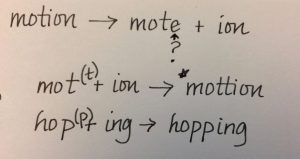 After that we began to brainstorm a list of words that had this <mote>base.  Our list included: 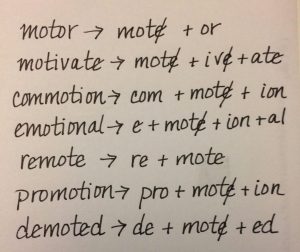 As I wrote these on the board and we talked about what happened at the joins (the place where the morphemes joined), I could feel the understanding taking root.  All words have a structure.  That structure includes a base element which carries the main meaning in the word.  If the base element can be a word on its own, it’s called a free base.  If it must be fixed to a suffix or a prefix in order to be in a word (like <mote>), it’s called a bound base.  When a vowel suffix is joined to a morpheme (a base or suffix) with a final non-syllabic <e>, that <e> is replaced.  When the suffix is removed again, the <e> surfaces again.

At this point, I asked the students to tell me the word sum for ‘motivation’.  I wanted to see if what we were talking about was making sense to them.  Confidently, they directed me to write the word sum and then, before I wrote the complete word, we went back to check those joins.

As is usual when collecting words related to the base in this way, I asked how each of the words had that sense of “movement” that is inherent in the base <mote>.

Students recognized that when motivated, they were moved to do something. When emotional, their feelings moved from the inside to the outside and showed up in a physical way (tears, smiles, frowns, etc.). With the tv remote, they knew that waves were moving between the remote and the television.

When I asked what it means if you get a promotion in your job, one young man said, “Well, say you are sitting at your desk and typing away at your computer, and you get the news that you are going to be a manager instead. OFFICE PARTY!”  We all laughed. This boy’s delivery was exuberant and funny.

So then I asked if anyone knew what it means if you get demoted in your job. Another young man on the other side of the room raised his hand. “It means you move down in your job. It means you go home and sit on the couch and eat a cheesecake by yourself.” This time I was the only one laughing. The rest of the boys and girls were a bit confused, thinking that the cheesecake would be a reward, but I understood exactly the picture he was painting. I just wondered how HE knew what some people do to deal with bad news!

So we are building understanding.  Having a classroom of 23, I recognize that we’re never all on the same page at the same time.  But we have all stepped away from the starting line.  I love guiding them as I have this week, revealing bit by bit what has always been there, and then watching them make sense of what has never made sense before.

Some think of a suffix as something that comes at the end.  But for us, it has come at the beginning (of our year, of our journey, of our understanding).