It’s always difficult to be absent.  I spend a lot of time thinking about the right activity to leave for the students.  This week, I thought about the fact that my fifth graders will soon graduate from our elementary school and move on to the middle school.  I thought that it might be interesting to have them look closer at the word <graduation> and the family it is part of.  I decided to have them start by reading over a list of related words that I provided.  At the top of the page were the words ‘Latin gradus‘.  Beneath that I wrote the denotation of the Latin noun gradus – “a step; a step climbed; a step toward something; something rising by stages”.  Then they read the definitions for each word out loud and talked as a whole class about how each word related back to the denotation given.  Here is the list of words they were given.

graduation  – When you have reached the top step in something, and there is a celebration.

grade – a degree of measurement.

gradually – something happening in stages.

gradual – something happening in stages.

grading – assign a number to.

graded – having assigned a number to something.

grader – person who assigns a number to something.

graduate – one who holds a degree or reached a step in education.

downgrade – a downward slope – something a step worse.

centigrade – divided into 100 degrees, as a scale.

degrade – a step worse in condition – to break down or deteriorate.

gradient – an inclined part of a road – a slope.

plantigrade – the way humans walk  on their soles with heels touching the ground.

After having read and discussed each word, they were to think about what the modern English base might be for this group of words.  After they established that, they were to write a word sum for each word and then to fill in a blank matrix that was provided.

The day I returned, I looked over the matrices they had turned in.  I was surprised to see that a few students thought that <grad> was the base, and that <e> was a suffix.  Considering that, I began to wonder what other misunderstandings were out there.  I decided to repeat the part of the activity in which the matrix was filled in, so I could talk about the choices made and hear the students vocalize the reasons for those choices.  I made a video of what I did with one of my three classes.  It went similarly in all three classes.

As we went through this activity, I was reassured that many of the students have a great understanding of the structure of words.  I wish you could have seen the anxious hand fluttering in the front row when Ana recognized that of <up>, <down>, <de>, and <retro>, only <de> was a prefix!  The other three had in common the fact that they were bases and would be part of a compound word when joined with <grade>!

As usual, this dive into structured word inquiry led us to a few more fascinating orthographical finds!  We talked a bit about the word retrograde, and how retro, which is now used as an adjective, is actually of clip of retrograde.  I asked if they knew the word retrospect.  I used it in a the following sentence:  “In retrospect, I shouldn’t have used so much fertilizer on my radishes!”  Since we had recently experimented with growing radishes, students understood that I meant “looking back”.  We also talked about what kinds of things were considered retro – things like clothing, music, hairstyles, dances, and more.

Next we looked at an extreme close up of a tardigrade. 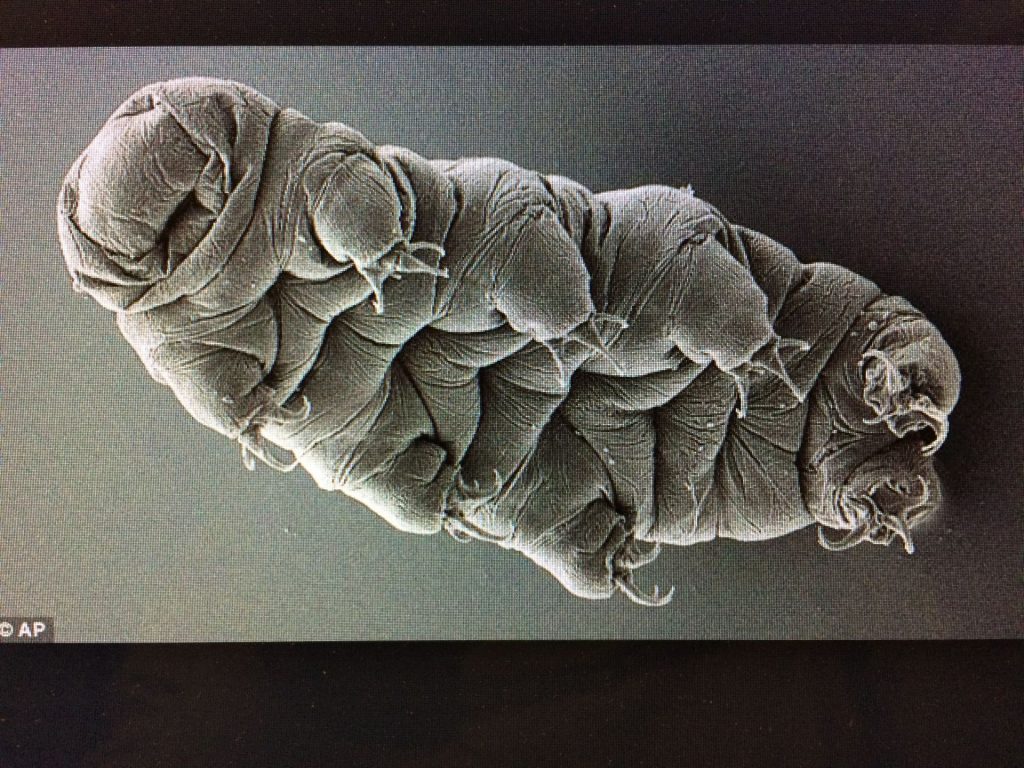 (This undated image released by Bob Goldstein and Vicki Madden taken with an electron microscope, shows a micro-animal “tardigrade” also known as a water bear, at the UNC in Chapel Hill, N.C. In Jan. 2015. Read more: http://www.dailymail.co.uk/sciencetech/article-3015185/Alien-life-midst-incredible-creatures-Antarctica-revealed.html#ixzz4h0jHmVxv )

What a fascinating creature this “slow stepper” is!  It can withstand extreme temperatures at both ends of the spectrum as well as extreme pressures and radiation!  After we looked at a few Googled images, the students begged to know more.  I found this video:

Watching a tardigrade rehydrate was especially interesting.  It is thought that when they curl up and lose all but a bit of their water, they can exist for quite a while.  The word ‘cryptobiosis’ was used to describe this state.  We had to pause and think about that word.  We knew from previous word studies that <bi> was Greek for “life”,  and we had recently come across <crypt> as we were doing a special pseudosaur project based on what we saw happening in Skot Caldwell’s classroom.  The Greek base <crypt> has to do with hiding, and according to Etymonline, <osis> is “a word forming element expressing state or condition.”  If you put all that together, we can understand the word ‘cryptobiosis’ to be the “state of hiding life”.

After watching this video, we wondered if we would find tardigrades in our own woods behind our school.  My husband, who used to work at a water treatment plant, said they are commonly found in the water.  As a matter of fact, about ten years ago he shot a video through his microscope lens and suspects that there were tardigrades present.  I can’t wait to look again at the video and share it with my students.   We just never know where a word investigation will take us.   This ended up being such a fun discovery kind of day!

One thought on “From Graduation to Tardigrades”