I am me because my mother was my mother.  I was inspired by her in many ways throughout her life.  I still am.  My mom modeled creative thinking and the implementation of original ideas.  She was a writer of stories, poems, comedic sketches, and song parodies.  She was a blue ribbon baker and cook.  Her freezer was always packed with cookies, meatloaf, sauces, and other delightful concoctions.  She was always changing, adjusting, and improving her recipes.  At the State Fair she did indeed win blue ribbons for her english muffins, scones, and Spam recipe!

She was an accomplished seamstress.  She sewed Barbie Doll clothes for me when I was young and my prom dress when I was older.  She sewed her own clothes for years.  I have three brothers and a sister, and every year she made homemade costumes for all of us. 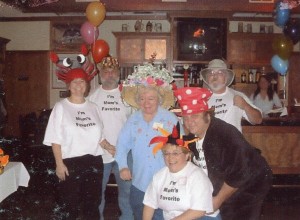 Mom was a reader.  I remember being so excited after a trip to the library!  We would all sit in the living room, each with our own stack of books.  Then we would share our favorites with each other.  As we grew older, she had the opportunity to read on a wide variety of topics.  It was always interesting to have a conversation with her.  Many of the books she read dealt with the American Civil War.  When she found out that her great grandfather fought in the war, she began research in earnest.  She has actually visited the field on which he was shot in the knee.  Because of her stories and research, I became interested as well.  It’s one of the reasons I enjoy teaching about the Civil War.

My grandparents were the only grandparents I knew with a music room in their house!  Having grown up with music, my mother was always humming, singing, or listening to it.   She played clarinet, guitar, and accordion.  She and my two older brothers formed a trio when I was young.  On her own, she has been in countless bands and singing groups over the years.  About ten years ago she was directing shows in the community where she lived.  The shows always had a lot of music and comedy that she was responsible for writing.  About five years ago she started a singing group of 3-5 women.  They sang some well known songs, but then also some of the parodies she has written.  Audiences loved her brand of entertainment and she loved being the entertainer. 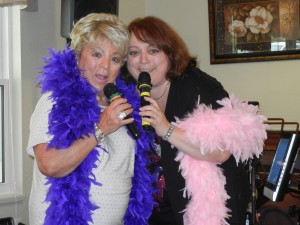 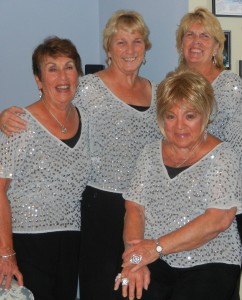 I had four days to accept the idea that cancer was going to end her life.  That was tough.  It has now been one week since she passed away.  I am very sad, but not at all forgetful that she planted many seeds.  I love coming up with original ideas for costumes or even hallway decorations.  I love to read.  I’ve spent happy hours sewing clothes for my children – and especially loved the bouncy dresses for my daughter.  I played clarinet during high school and have been in several choirs.  A few years ago, I even sang one of her parodies in a fund raising talent show.  Like I said, ” I am me because my mother was my mother.”

5 thoughts on ““All that I am or hope to be, I owe to my angel mother.” ~ Abraham Lincoln”