“The real voyage of discovery consists not in seeking new landscapes, but in having new eyes.”   Marcel Proust

We were watching a TED talk  about the interesting forms of life found at the bottom of the ocean.  The presenter, David Gallo, used the above quote.  He was referring to being open to what he might see as he voyaged to the bottom in his submarine, Alvin.  The TED talk was fascinating.  Gallo’s enthusiasm and excitement kept the attention of my students and myself.  He made us feel as if we were on the voyage with him and seeing what he saw.  And he got me thinking about the word <voyage>.

Several images popped into my head…

~the name of an old television show my brothers used to watch when I was a child – “Voyage to the Bottom of the Sea”,

~people waving and shouting “Bon Voyage!” to people on large oceangoing boats such as the Titanic.

As silly as it sounds, my mind went to another television series, “Star Trek: Voyager”, that my children watched at times during its run from 1995-2001.

And at that point I thought of Voyager I and Voyager II which are the unmanned spacecrafts originally launched in 1977 that are still sending us information from the outer reaches of space!  As I was watching the video I have included here, the following words popped out at me. “It’s discovering new things because it’s going where nothing has been before.”  That sentiment is similar to what I heard David Gallo use in his TED talk.  It was the connection between a voyage, exploration, and discovery.

With a solid idea of how I think of this word, and of how I have heard it used in significant ways, I was ready to explore it further.  You see, what I have learned since happening upon Structured Word Inquiry is that there is discovery beyond a word’s current day usage.  It is something I now look forward to.  It’s like a special gift I used to overlook because I was looking for fancy paper which would make it catch my attention.  Instead, the wrapping was the word itself.  You might think of it as having been camouflaged in its own spelling!

My first stop is the dictionary that is on my Mac desktop.  The definition of <voyage> confirms what I already knew – that a voyage is a trip, generally by sea or space.

Next I check in at Etymonline.

The word <voyage> wasn’t used as a verb until the 15th century, but was used as a noun as early as the 13th century.  That is when it was first attested.  Before that it was used in Old French, spelled voiage, and used to mean “travel, journey, movement, course, errand, mission, crusade.”  As I think of those words, the only two I might link to discovery or exploration are mission and crusade.  Further back in time this word existed in Late Latin as viaticum “a journey.”  The next note in the entry says that in Classical Latin viaticum referred to the “provisions for a journey.”  This is even further away from the sense that is so prevalent in today’s use of the word!  Further back in time we see that this word is from via “road, journey, travel.”  This piece of information is quite interesting, don’t you think?  I have used the word <via> to mean “by way of.”  I might say I travel to Madison via highway 12/18.  Before I take off down that “road”, I want to see what other resources say about <voyage>.

Next I look in my Chambers Dictionary of Etymology.

Again we are looking at <voyage> as a noun before it was used as a verb.  The entry says that probably before 1300 it was viage “a traveling, journey.”  Around 1300 the spelling was veyage; borrowed from Old French veiage, vayage, voiage, vaiage and was used to mean “travel, journey, voyage.”  The spelling voyage was first recorded in English in 1527, probably influenced by the spelling of the verb.  The spelling of the verb is attested in 1475 in Caxton’s translation of the History of Jason.  It was borrowed from Middle French voyager, from the Old French noun, voyage.  The dictionary goes on to conclude that <voyager> is probably formed from the English verb voyage + er.

Next stop is the Oxford English Dictionary.

Here I find this word used in 1297 to mean “an act of traveling; a journey by which one goes from one place to another (esp. at a considerable distance).  One thing I love about the OED is the examples of this word in actual use.  I can read sentences that include this word from as early as 1297.  What I find when I do that is that people were taking voyages for many reasons.  Some were just heading home.  Some were on a pilgrimage which has a different sense then a voyage with a destination.  Others were possibly part of those crusades mentioned at Etymonline.  A sentence from c1550 states, “Thei..toke their viage toward Rome, destroying all thinges on everie side.”  And another from 1564, “The consuls toke then their viage to invade Carthage”.  Since these were typically long trips, it would make sense that the people traveled by horse, yet there is another sentence from 1584, “We must take our voyage on foote the space of forty dayes by the waters side”.

And then there are many examples of how this word has been used to refer to trips over water from as early as 1310.  From what we know about early explorers, that is not surprising.  As I kept reading through the entry, I saw that in 1667, the word was used to mean a journey, but in a different sense.  “So stears the prudent Crane Her annual Voiage, born on Windes”.  This sentence is from Paradise Lost and is referring to the bird who, while voyaging, is carried by the winds.  Here is where the sense and meaning of <voyage> leaves the ground and the water and ventures into the skies!  In 1893, the earth itself is referred to as taking a yearly voyage around the sun.

Another interesting use of this word is in a figurative sense to describe certain events of human life and even what happens after life.  Here’s an example of this use in a sentence from 1390.  ” Fourtiene yer sche was of Age, Whan deth hir tok to his viage”.  If my interpretation of this is correct, a 14 year old girl was taken on death’s voyage.  Here’s an interesting sentence from 1529.  “Yt much more special assistence of god with his christen churche in their spiritual viage”.  I wonder if that is in reference to someone’s deepening of faith (spiritual voyage).  One more from 1771, “Among our fellow-lodgers at Berwick, was a couple from London, bound to Edinburgh, on the voyage of matrimony”.  These examples show this word having a sense that indicates a journey with a goal or destination. 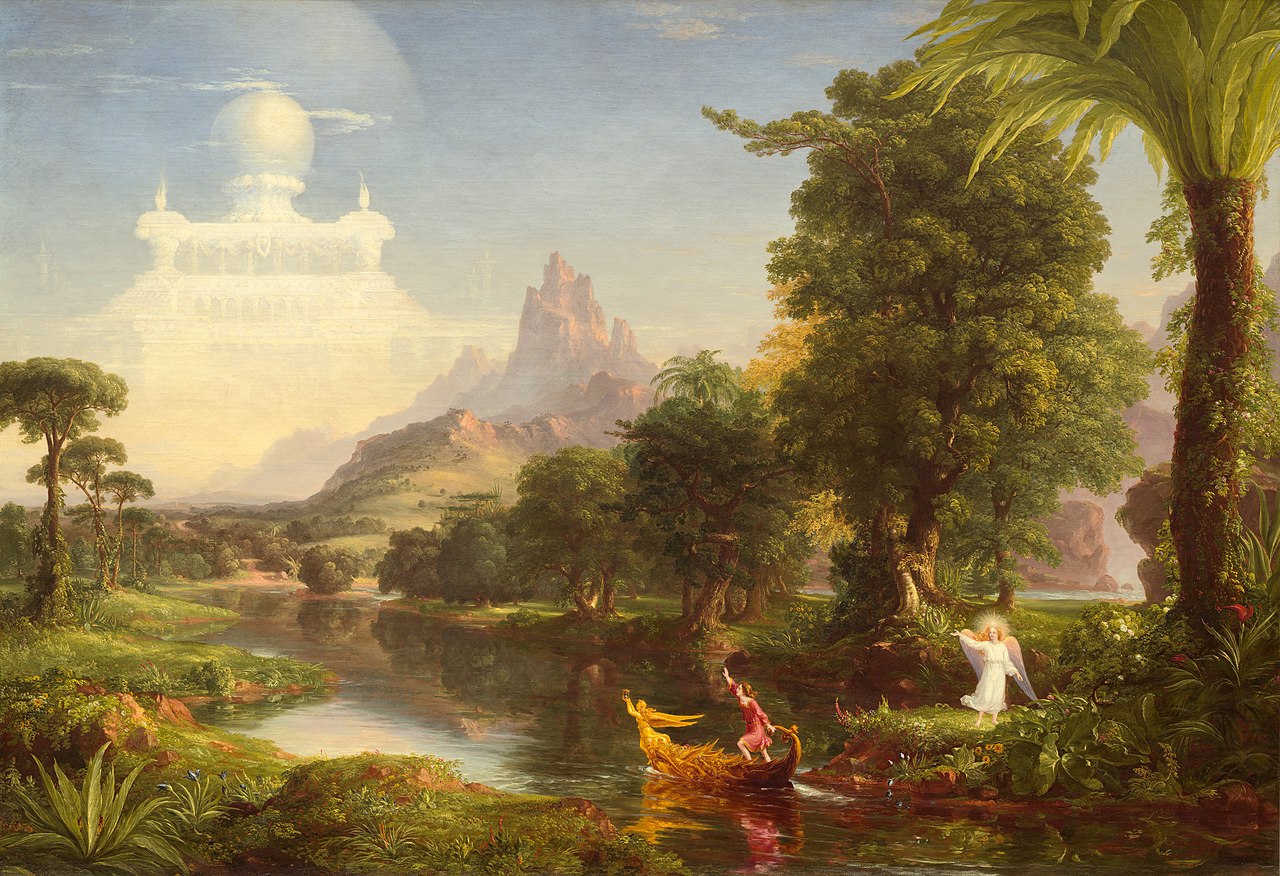 This is such an interesting word!  I feel like I could almost create a timeline to show how it has gone from meaning simply traveling on land, to including water, to journeying in space, and even to have other figurative senses which are vital to a writer’s mind.  It’s time to go back to Etymonline and follow that link to Latin via “road, journey, travel.”

The entry is referring to <via> as a preposition “by way of.”  It was first attested in 1779 and is the ablative form of via “way, road, path, highway, channel, course.”  Further back it is from the Proto-Indo-European root *wegh- “to go, move, transport in a vehicle.”  Continuing in the entry we see that this PIE root is also the source for our English word <way>.  There are a number of words that include a form of this stem, via “road.”  I have encountered this base before and have found it helpful in visualizing a word’s meaning.

obvious – from <ob-> “in front of; against” and viam “way.”  When something is obvious, it is right there in your way and you cannot avoid seeing it or dealing with it!

deviate – from <de-> “off, away” and via “way.”  When someone deviates from the plan, they are not sticking to the agreed upon path!  They are going off in their own way.

trivial –  from <tri-> “three” and via “road.”  This word is one of my favorites because of the following scene I associate with it.  At a place where three roads meet, people traveling on those roads might stop and chat.  These people are traveling by foot for the most part and no doubt look forward to a bit of friendly conversation.  It is a very public place and the topics of conversation are the little things everyone’s life is full of.  One might discuss the weather, their business (crops perhaps), politics, or family happenings.  And if you are already putting two and two together, you are noticing that these things could be considered trivia! From 1890 Baby’s Annual Pictures and Stories for Little People.  It was published by D. Lothrop Company.

Every time I conduct one of these word investigations, I feel like I have embarked on a voyage of sorts.  Not because I began at point A with a question and arrived at an endpoint with an answer, but rather because like the satellites Voyager I and Voyager II, my question has been launched and is still out there.  My curiosity is still aflame.  My interest is lit and I am receptive to understanding more about any of this when it becomes obvious to me – when it is right there in my path.  My smile will only broaden and I will listen attentively.  I seek to voyage back in time to consider how a given word was used by the people who spoke it and/or wrote it.  I seek to explore its current spelling and understand the significance of the graphemes and their corresponding phonemes. I seek to discover the bigger picture that includes a particular word, but also its relatives, be they morphological or etymological.  Think about it.  After 40 years, Voyager I and II are still transmitting information to the earth, even though they continuously travel further and further away.  We could say, they have boldly gone where no man has gone before!  If you are or were ever a Star Trek fan, you will recognize those words.  Hmmm.  Now I’m thinking about the word <trek>.

“We don’t receive wisdom, we must discover it for ourselves.”  Marcel Proust