When I first began teaching fifth grade, there was a teacher down the hall that I just could not respect.  It had nothing to do with her knowledge of the content, it had to do with her manner of delivery.  It didn’t matter if she was talking to children or to adults.  She was abrasive and completely unaware that humiliating a person in front of a group of people made them less apt to listen to anything else she had to say.

She had a reputation for hugging and kissing your head one minute and embarrassing you for making an error the next.  Students who forgot their homework or lunch were petrified to tell her for fear of her wrath.  I remember one incident in which a student forgot to attend a meeting in her room for a club she was leading.  She made sure this student sat in the office during an all-school field day event as a consequence.  Students who were assigned to go room to room picking up the daily attendance hated having to stop at her room.  If she had it hanging on the door, all was good.  But if you had to knock at the door to ask for it, you were publicly scolded for interrupting her teaching.  Those who were afraid to knock were also admonished for just standing there.  Yep, she had a reputation.

The first year I worked in my district, I taught for a half day and serviced students with reading needs the other half.  I remember being assigned to work with a specific student in her room.  One day early in the year, the students were working on creating a presentation.  I pulled a chair up next to the student and asked how she was organizing her ideas for the presentation.  I got a piece of paper and drew some lines in preparation for discussing a framework from which she could work.  The teacher’s voice boomed loudly across the room, “Stop helping her!  She is not to have help with this!  This is her project and I do not want you doing this for her!”  And then she smiled as if she had just passed along helpful information.  The teacher could not see what I was doing with the child, nor could she hear what I was saying.  I wasn’t doing the work for the child, but she didn’t bother to find that out before yelling across the room.  The child looked at me and instantly felt sorry.  I was so humiliated, that I left the room.  This teacher never explained anything about this project to me before class.  I was there to help this child, yet the teacher did not want me to help.  What exactly did she want me to do?   I hated going in there.  I was so glad when that year was over.

As a first year teacher, I had an opportunity to watch and learn from someone with a lot more experience than me.  But her treatment of others was so jarring and humiliating, I couldn’t appreciate and now don’t remember anything about her teaching.  However, I will never forget the looks on the faces of the children she blasted for not punctuating something or not having followed one direction or another.  You know, for having made a mistake. 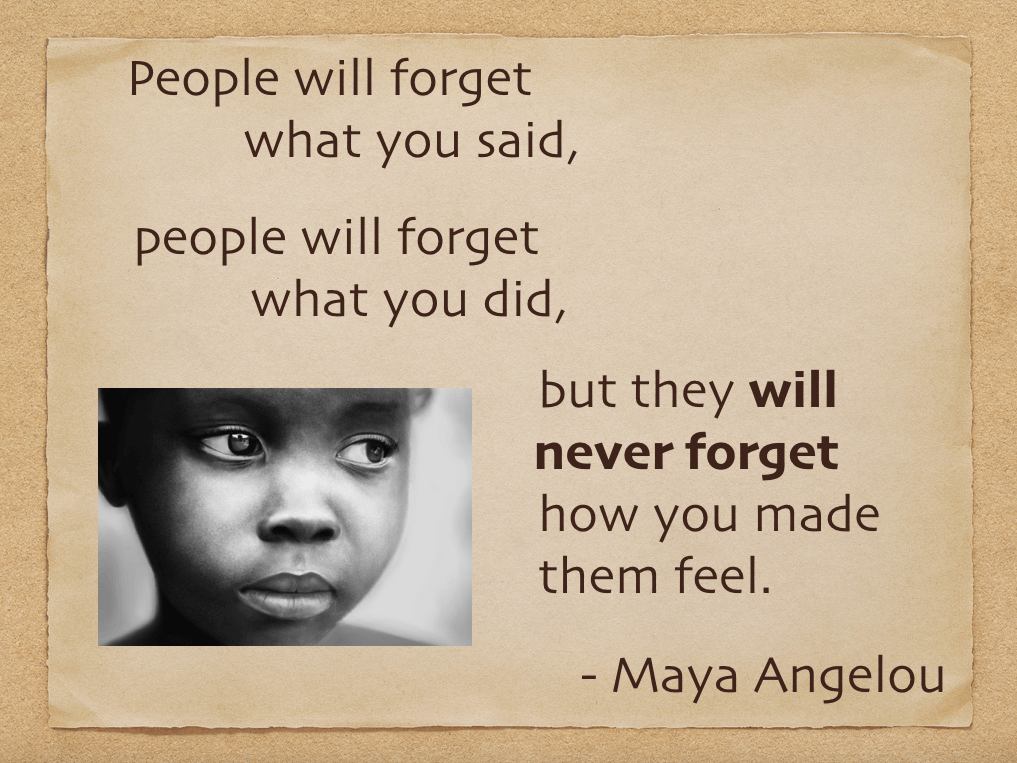 The teacher in question didn’t think it was in anyone’s best interest to worry about a person’s feelings.  She needed to speak the “truth” and if someone didn’t take that well, that was their problem.  The facts had to be put out there, and after all, she had always been direct and bold about it.  People were supposed to accept that about her.  That’s who she was.

In imagining that a few hurt feelings were insignificant (maybe even necessary in the process of learning) or that most people she had contact with didn’t complain about her manner, she deluded herself.   People didn’t confront her because they feared the treatment everyone knew to expect from her.  People didn’t confront her because they felt powerless to productively change the situation.  Instead, people talked about her behind her back.  Instead, people sought out the children in her room who were her “targets” for the year and offered them hugs and a sympathetic ear.  I, myself, went directly to the principal before my own children were in 5th grade and requested they be in anyone’s classroom but hers.  I could not imagine to what degree her unpredictable treatment of the children limited their learning.  How can learning be fun when you are “walking on eggshells” each day, or waiting for her to spot a mistake you made? I stopped taking her seriously as a professional the first time I saw her humiliate a child.  When she humiliated me as well, I began to avoid contact with her whenever possible.  How many of those children actually enjoyed coming to school each day?  I sure didn’t.

Now let’s compare her to the most inspiring teacher I’ve ever met.  This is someone who encourages collaboration, and sees himself as a participant in the learning.  In fact, he thanks the students who gather in his classroom for challenging his understandings and giving him more to think about.  He encourages his students to get together and study without him because like I said, he does not see himself as THE ONLY ONE with knowledge.  He knows that learning happens when motivated people come together to ask questions and listen to one another.  Without him there, the students learn to learn.  They learn to share their thinking, they learn to listen and they learn to ask the questions that will steer whatever inquiry they are working on.  Of course, once the students’ inquiry has run its course, they seek the teacher out and set up a meeting to share all of their new questions!

When someone makes a mistake, he thanks the student and calls it a big fat juicy mistake that will give all who are listening an opportunity to understand something better.  Following his lead, others in the class also offer thanks to the classmate whose mistake pointed to their own misunderstanding.  If someone in the class reveals in some way that they are misunderstanding something, he uses examples and offers the clarification they need to build a more reliable foundation of the topic at hand.  And he does so in a way that does no harm to the student’s willingness to learn from him.  No one leaves his classroom feeling shame or humiliation.  No one leaves feeling uncomfortable because of how another student was made to feel.

One of the hardest and yet most amazing things I’ve learned from this teacher is not to need an immediate answer to a question.  As an educator and a lifelong student, that is not something I’ve been conditioned to do.  As a teacher, I’ve spent hours and hours thinking of the questions I’ll ask and the answers I’ll hope for.  After all, haven’t we been taught that the point of asking a question is getting an answer?  I can even note that at some point in my student life, I stopped asking the kinds of questions that were too big for immediate answers.  And then I slowed down with asking questions at all.  So here I am as a classroom teacher with 2o+ years of experience finally learning that my questions can sometimes merit a celebration!  And I’m finally learning to sit with a question and a few pieces of evidence.  Just sit.  And ponder.  And maybe even forget about it for a day or three or eight.  Further evidence will undoubtedly present itself, and at that point I’ll revisit my question and contemplate whether or not the new evidence is bringing further clarity.  If it does, great!  I’ll happily share that evidence and that question with someone.  But if it doesn’t, no sweat.  I’ll keep pondering.  In this way, the learning is truly ongoing.

How can these two teachers be so different?  Easy.  One focuses on the experience of learning and honors the human beings that ask to participate.  The other shares what she knows, but does not hold herself responsible for the effects her words have on others.  She expects faults and ignores  strengths.  One attracts people who want to learn and be respected in that process.  The other has students, but they are guarded.  They admit they are wrong before they are because they anticipate being called out for it.    They rely less on their own understanding and stay dependent on the teacher.  Even if that other 5th grade teacher had been extremely innovative or the most book-smart teacher I ever met, I wouldn’t have been able to get past her disregard for the feelings of others.  I was never able to learn from her because I lost respect for her. 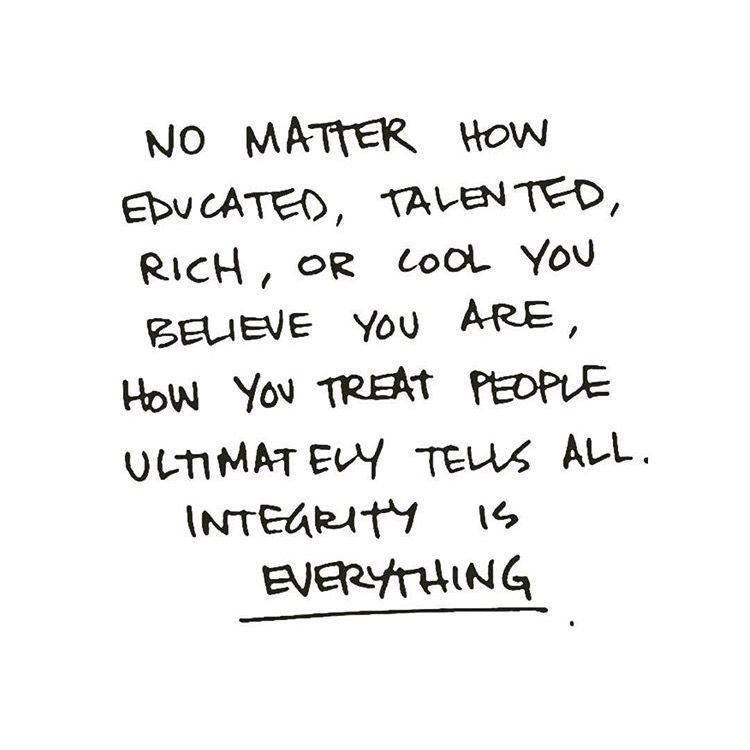 2 thoughts on “Who Motivates Your Learning?”