When a colleague forwarded a notice back in January about a podcast contest that NPR was hosting, I was immediately interested.  It sounded like something my students and I would enjoy doing.  The fact that I had never created a podcast before didn’t deter me.  Back when I was doing my own student teaching, I had my students create radio shows.  Wouldn’t this be similar?

The idea of having the students prepare a script that didn’t rely on visuals was appealing.  They would have to make sure they spoke in ways that complemented what they were saying.  They would have to think about the words they were using and not just assume that the orthography terms they use every day would be familiar to their listener.  They would have to rehearse, rehearse, rehearse so that they sounded more like they were speaking than reading.  And in my mind, I knew they would need to write a script that was longer than anything they’ve written to date!  What a lovely marriage of research, writing, revision, reading, speaking, and collaboration this could be! NPR supplied a well-thought-out plan for guiding educators and students through this process, so I decided to present this idea to my students.  Since I teach three groups of 22 students each, I wondered how many of the students would be interested.  I needn’t have wondered.  It turns out they were ALL interested!  Okay!  We were in!

We began by listening to some of the podcasts recommended by NPR.  We listened to one a day for several days, pausing to discuss the kinds of information we felt was important to have been included, the overall feel of the podcast, the seriousness of the overall information sharing, even when humor was involved, and the sound effects.  Each day, the excitement grew in regards to writing their own.  Many were regular podcast listeners and  were especially enthusiastic.  The majority of students, though, had never listened to a podcast before this.  But they too became enthused as they listened to the well-put-together podcasts each day.

The first thing we had to do was think of our topic.  For me, that was obvious.  The students would be randomly placed in groups and would each investigate a word of the group’s choosing.  They loved that idea!  The students had investigated words on their own several times and were familiar with the resources to use.  This idea gave them a level of comfort as they began.  Putting them in groups of 4-5, meant there were five groups in each class.  That meant we would be creating a series that included 15 podcasts.  The students wouldn’t just be looking at the word’s etymology or root, they would also be looking at how the word’s use or spelling might have changed over time.  It would also be important to include current information about this word’s meaning and its use.  In other words, they would be providing a broad look at a single word.  This was going to require a lot of research before script writing could even begin!

The students took a few days to think about what word they would choose.  Some were inspired by what they had been learning about during their study of the Civil Rights Movement (segregation, peace).  Others brainstormed a list and then looked up information on each to see which sounded more interesting to them.  One group paged through a copy of John Ayto’s book, A Dictionary of Word Origins, and found their word (eureka).  As soon as each group had decided, they let me know and then started learning as much as they could.  As they found out things, they shared the information with the group.

Several days in, each group started writing a script.  According to the NPR guidelines, the podcasts were to be a minimum of 2 minutes long with a maximum length of 12 minutes.  These scripts were no doubt the longest scripts any of these students have been a part of writing!  When they would tell me they were finished, I would ask them if they timed themselves practicing their podcast.  When they did, they would realize their podcast was too short.  So then the real digging began.  The search for related words.  The search for changes in spelling over time or changes in meaning over time.  The search for the word to be used in different ways depending on a context.  The search for how the word is used today and perhaps which people have become associated with the word.

And with this renewed digging, this need to find more, came some surprising facts which were surprisingly satisfying!  I could feel the level of engagement increase among the students.  They would enter my room each day with the same question ready for me, “Are we going to work on our podcasts?”  After a quick progress check (making sure each person knew their role and each group was focused), they grabbed their Chromebooks, found a table or grouped desks together and got to work.

Every once in a while I would hear an extended patch of laughter coming from one or another group.  When I went over to check it out, it was always related to their script or the misreading of it or some information they found that seemed funny.  They were still engaged, just enjoying the team work atmosphere and the shared experience of creating something worth creating! 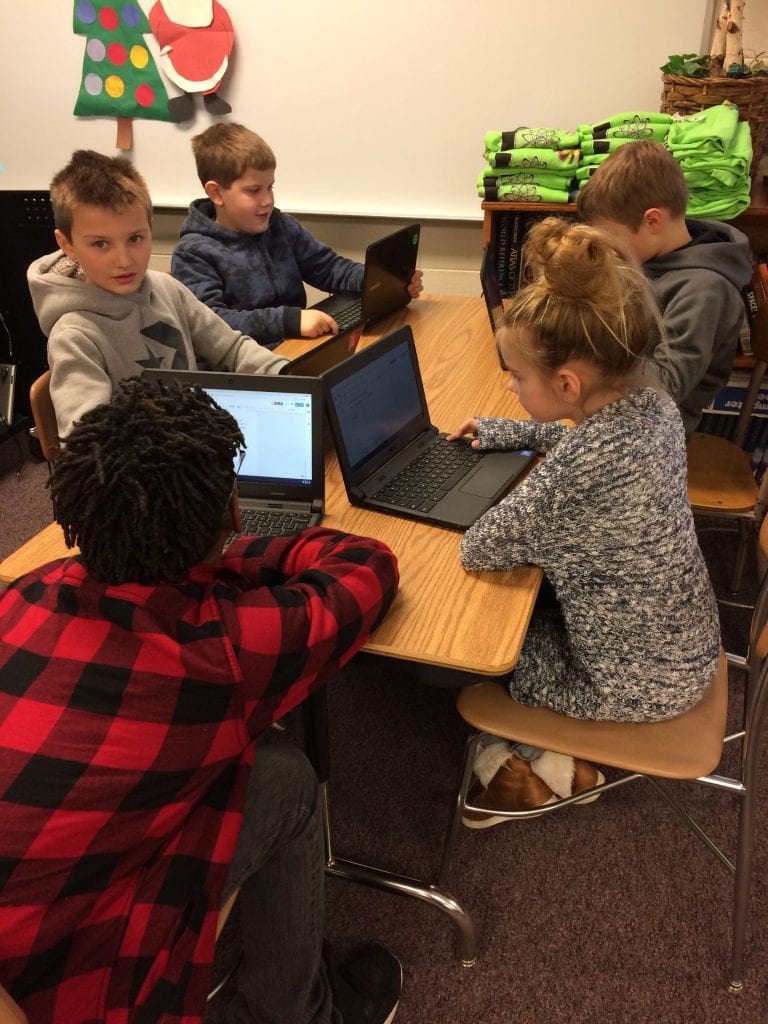 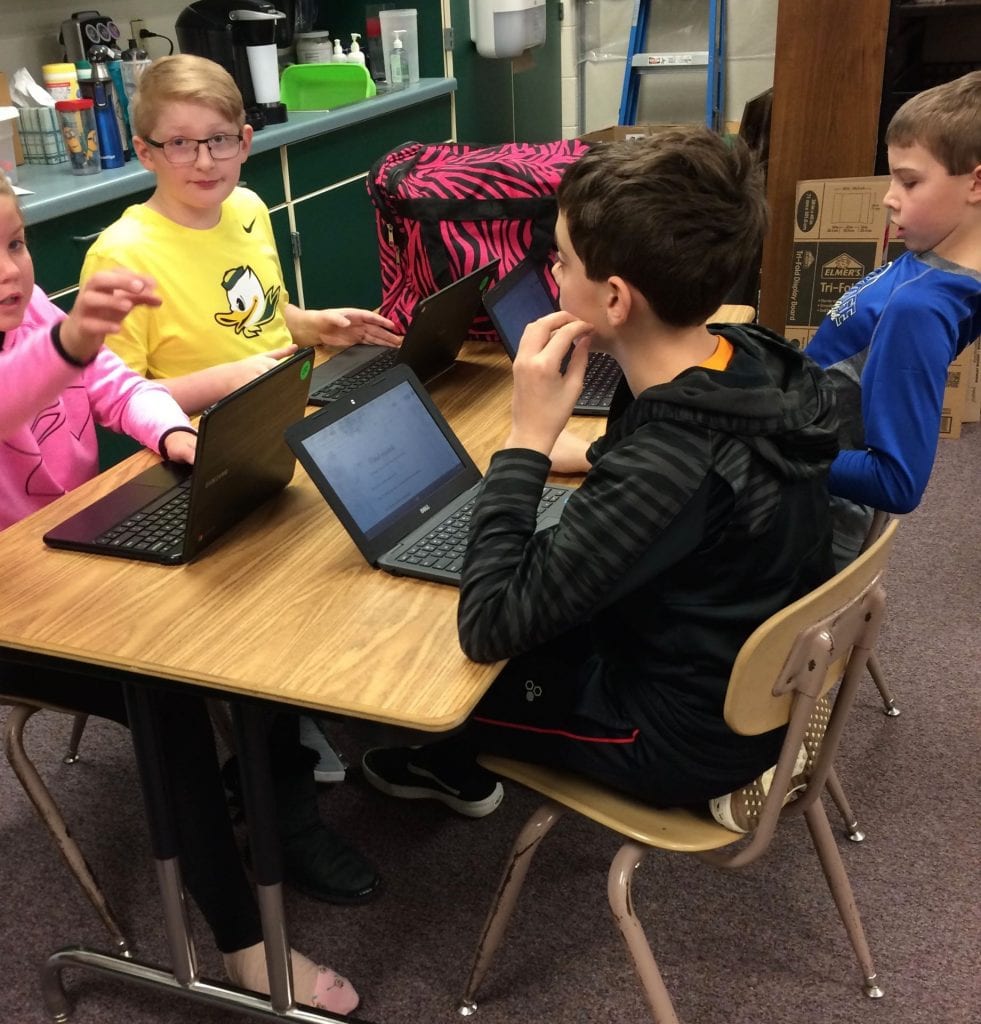 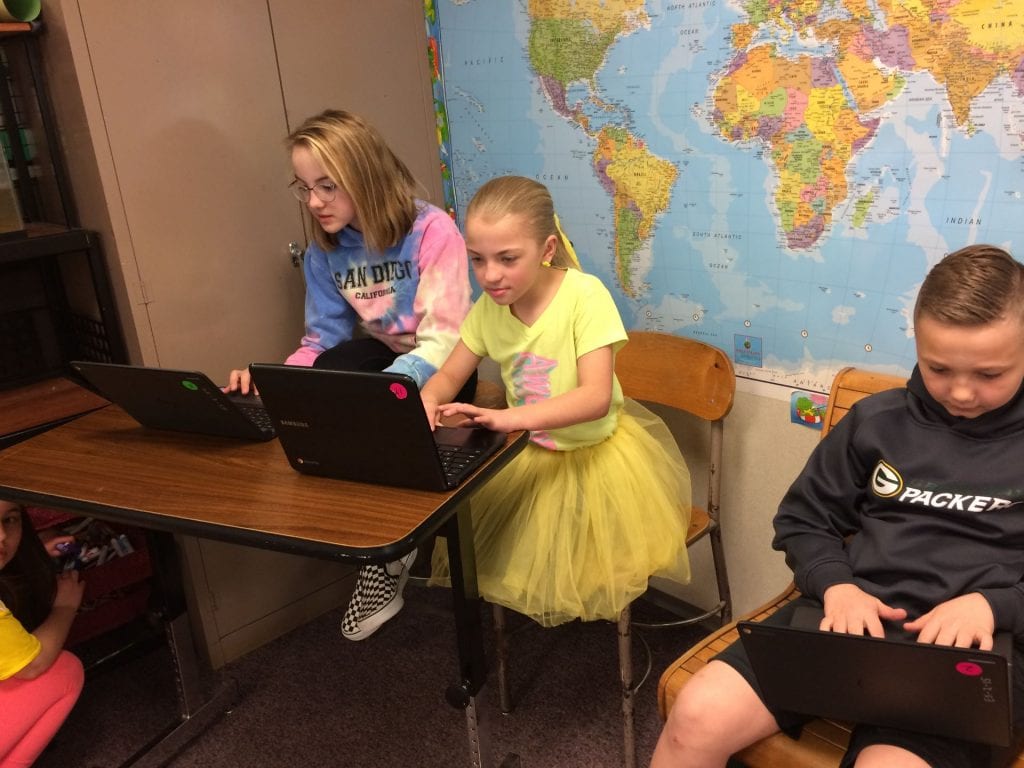 After three weeks or so (I kept reassuring them that the research and writing should be the most time consuming of any part of this project) the first of the groups finished, and said they were ready to record.  It was time to start the next phase of this project.

According to the guide at NPR, I could have recorded these audio files on my iphone, but with 15 groups, I could imagine running into problems with space on my phone.  So I purchased a recorder.  I’m so glad I did!  I would get it set up for the students and they took it from there.  Most all of the groups recorded more than once.  That was fine.  We were all getting used to the equipment, being loud enough, being slow enough, and having enough expression in our voices.  We turned a small storage room into our “recording studio.”  You can see my recorder on the inverted tin can in the center.  The students read their scripts from their Chromebooks so they wouldn’t have to worry about the added sound of papers shuffling. 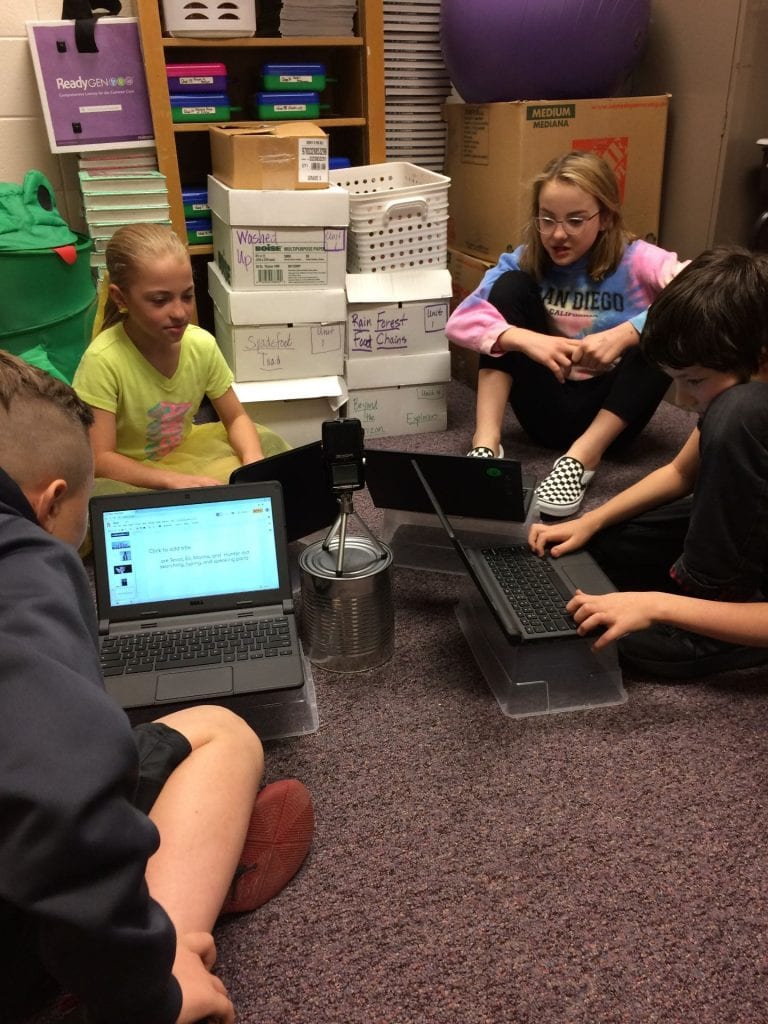 Next we went down to the computer lab and uploaded the audio file into Audacity which is a free software for editing audio files. The students had never used Audacity before, and neither had I.  So the students learned to use the HELP tab.  When they couldn’t find their answer there, they tried looking for a video at Youtube that would walk them through editing at Audacity.  Sure enough!  They not only found answers, but could watch someone do what they needed to do.  They became pretty confident at editing and offered help to other groups who became stuck.  So not only was I seeing cooperation within the groups, I was seeing cooperation between the groups!  This experience just kept getting better and better! 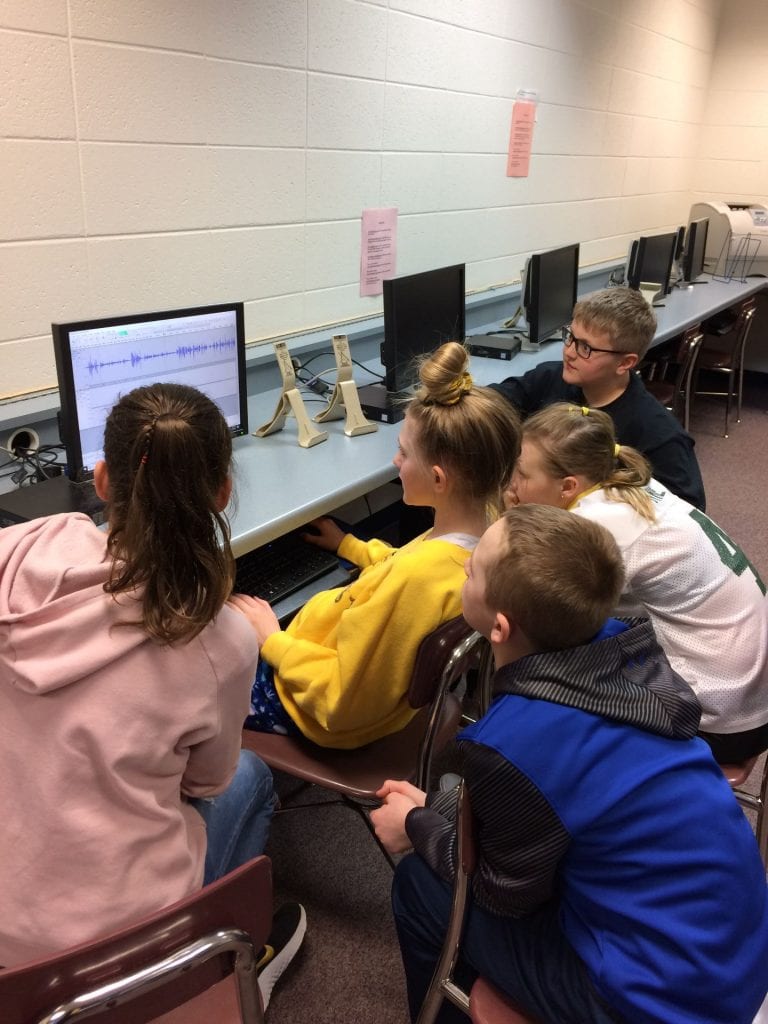 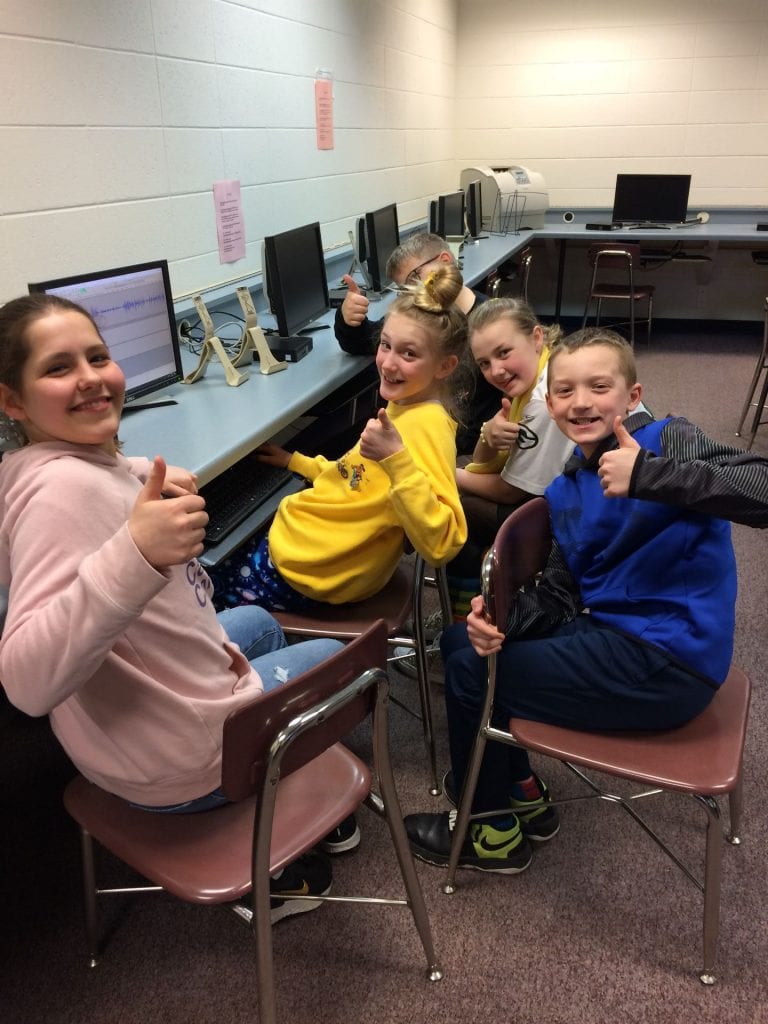 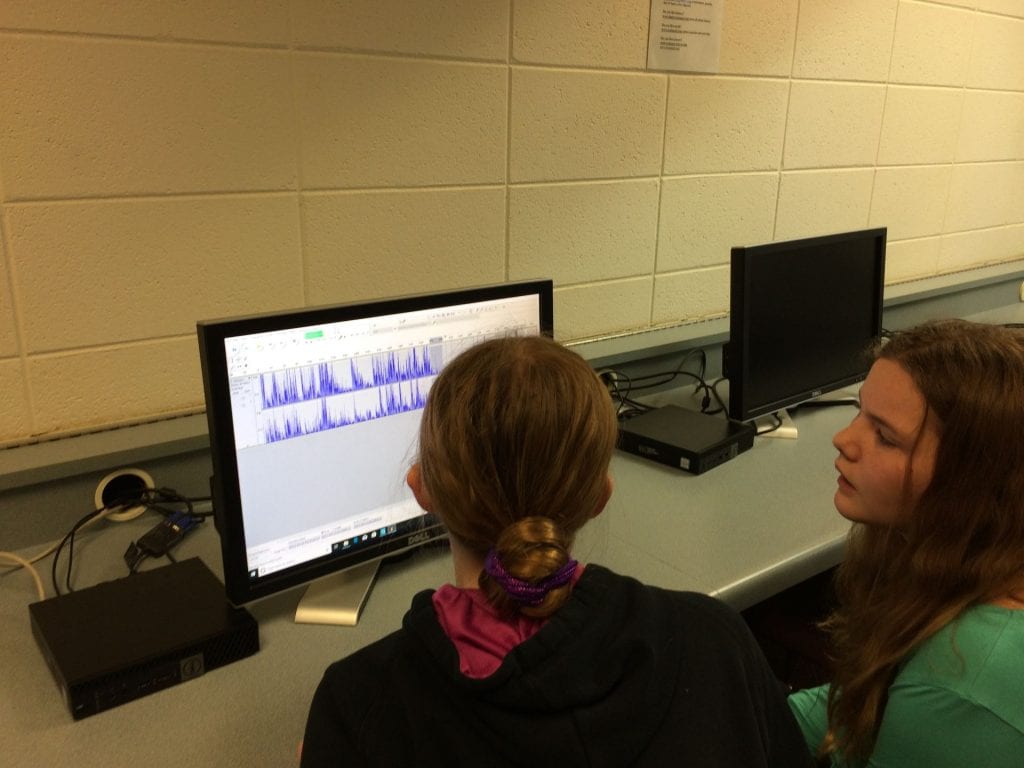 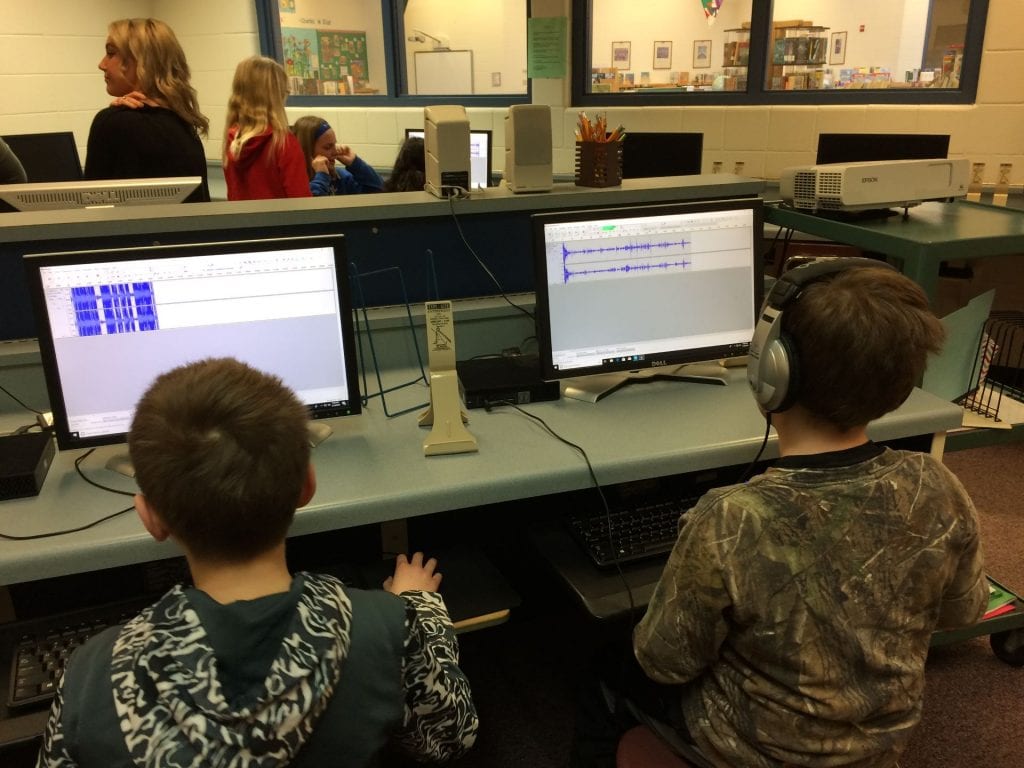 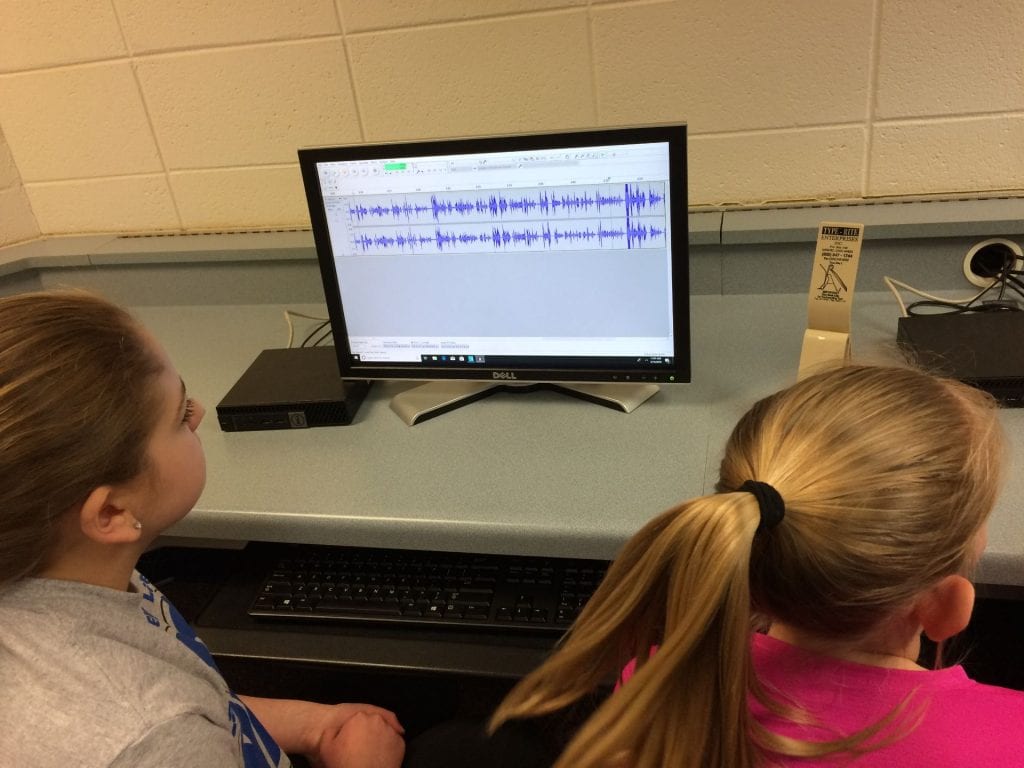 The trickiest part of this editing was that at some point we had five groups in the lab all trying to listen and edit their podcast.  If headphones were used, that meant that only one person would be making decisions, so the groups usually used headphones only for listening to the instructional videos at Youtube.

But one by one, the groups finished the editing and I saved the file to a flash drive.  Then it was back to the classroom for the group.  Once they finished their podcast, I asked them to present their same script as a video.  They now had the opportunity to add pictures, images, and matrices to enhance their information.  This seemed like another way to share their word investigations in a slightly different platform!

As the groups finished, I uploaded each podcast to SoundCloud.  From there, NPR will be able to access them as part of their judging.  Then I filled out the entry form for each group.  They will be judged in the 5th-8th grade category.  Will one of these podcasts win?  Who knows.  All I know is that in the hearts and minds of my students, they have already won.  When I hear students say, “I am really proud of our group!  I’m proud of me!” then I know that this learning experience has been rich and worthwhile.  We all know that learning isn’t just about learning the content.  And this experience was no different.  These students had to persevere when the editing got confusing or they just couldn’t figure something out.  They had to ask for help when needed because this project had a deadline and there wasn’t time to waste.  They had to use patience when one member stumbled over speaking parts or pronunciation of words.  (They were so helpful and kind to one another and never minded practicing just one more time before recording.)  They had to be willing to go back and re-record if the group felt that was the best option.  You see, with every group I saw a serious goal of turning in the best version of their podcast that they could.  I was constantly proud of their attitude, work ethic, and respect for members in their groups.  Were there moments of chaos and discord?  Absolutely!  But all in all, the students learned to redirect their attention, be accountable for their contribution to the group, compromise with members in their group, and compliment each other for little things done well!

In other videos my students have created, I have been the script writer.  This time the students can proudly say they did every facet of this project themselves.  Mind you, if I noticed that something was incorrect or mispronounced, I spoke up and the students willingly amended their podcast.  But I’m sure I missed a few things as well.  Just today I was listening to the episode about “Eureka!”  About three fourths of the way through, I realized that the name of the city they were mispronouncing was Syracuse!  Made me chuckle.  Their mispronunciation made me think at first that it was a city I didn’t know!  It is still one of my favorite podcasts in this series.  Okay, so in truth I have around 15 favorites in this series!

Here is a link to my SoundCloud channel.  I hope you will listen to a few of these podcasts.  If you are wondering where to start, you might enjoy “Lexical” which has the interview with Doug Harper.  Some other great ones are “Hippopotamus,” “Not so Nice,” “Kerfuffle,” “Eureka,” and, well, all of them!  You can either listen here by clicking on the arrow in the top left corner, (in which case the podcasts will play in the order they are listed)  or you can click on my name and it will take you to my page on SoundCloud where you can see the full name of each episode and choose the one you’d like to listen to.  You can also scroll through the list below my image and choose one (although the full name of each episode isn’t always showing.)

9 thoughts on “Having a Blast! Creating a Podcast!”