The beginning of the school year is an exciting time.  I always have big plans of what to make sure I get started on right away.  And it’s important to make those first week activities and explorations interesting.  I want my students to leave my classroom wondering what we will be doing the next day.  I want them to anticipate that whatever it is, it will be interesting and thought provoking which often makes it fun!

For me, one of the things I start in the first week is grammar.  There is so much to review and so much to introduce.  The sooner I get started, the sooner we can get to putting the pieces together and making sense of how it works in a sentence!

When I ask my students what they understand about nouns, they tell me that a noun is a person, place, thing or idea.  They know that a noun can be singular or plural, and common or proper.  Although by the looks on all the faces, not everyone is clear about those categories.  I tell them that a noun can be categorized in many ways.  So on a blank page in their interactive grammar books we identify eight of them.  I ask them to leave room for a title and then to divide the page into eight equal (roughly) sized areas.  The heading of the page will be NOUNS.  I draw something similar on the board and then begin labeling each section.  Once each section is labeled, we brainstorm examples to write in each space.  Here are a few pictures of student pages as we have finished: 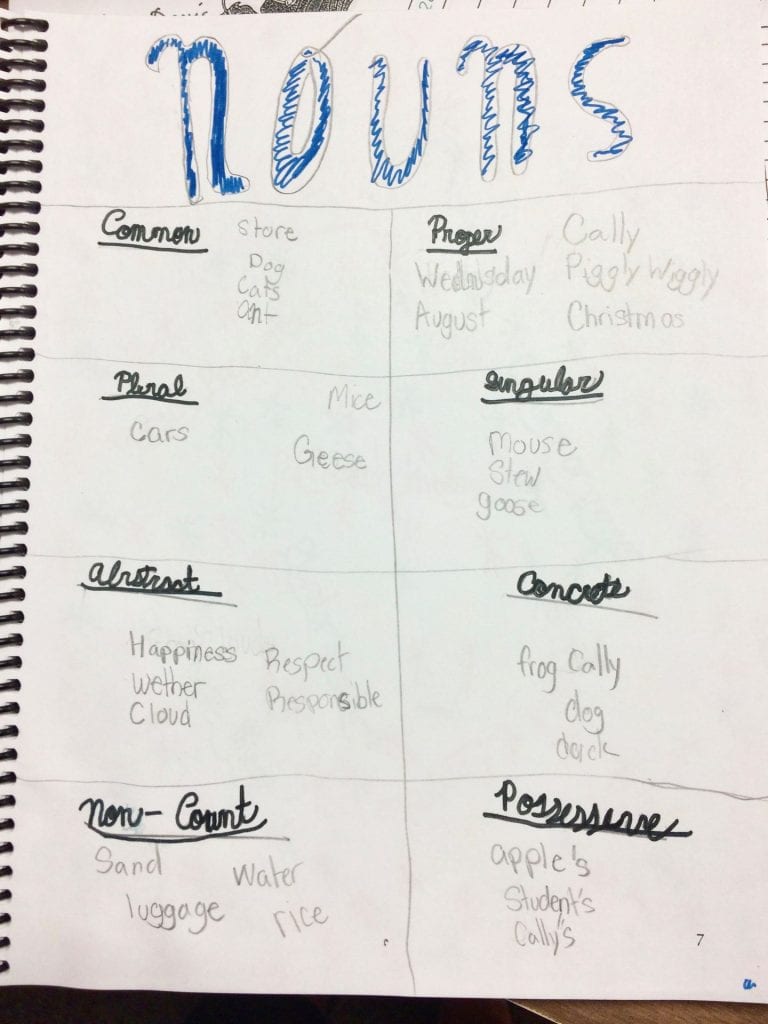 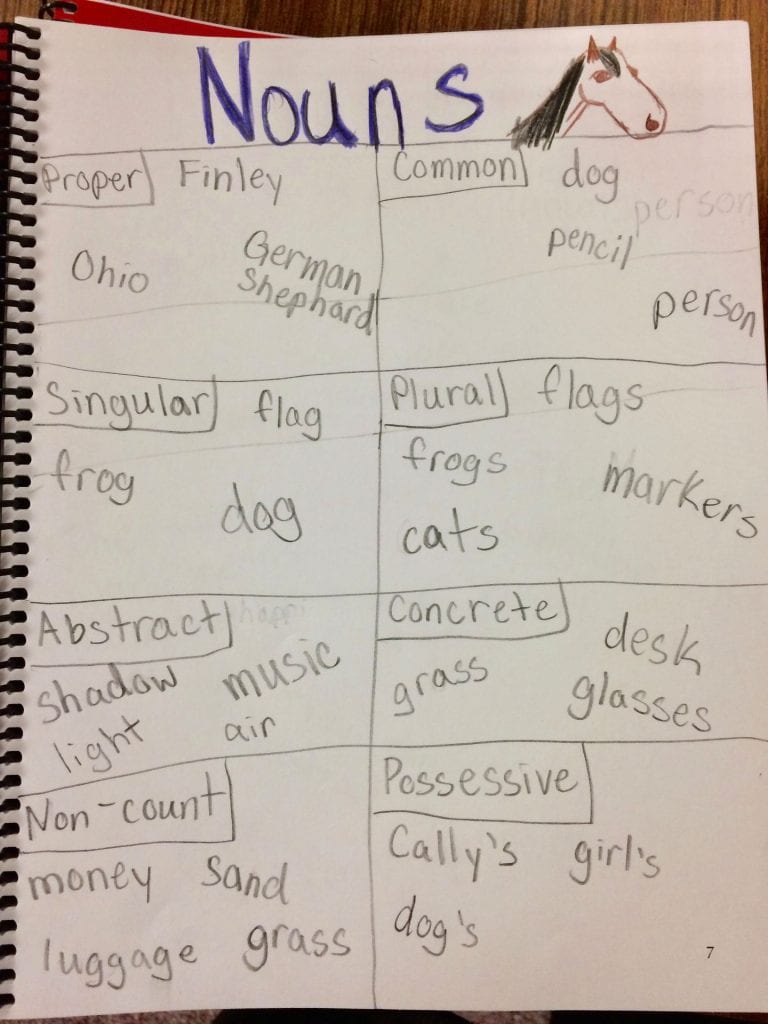 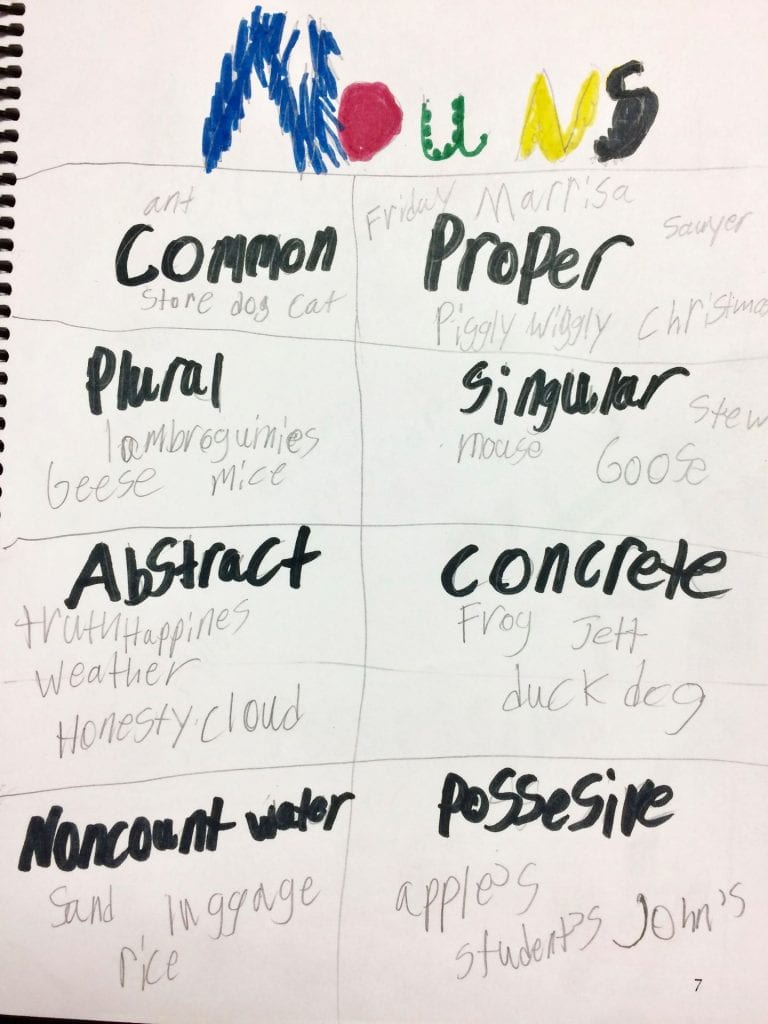 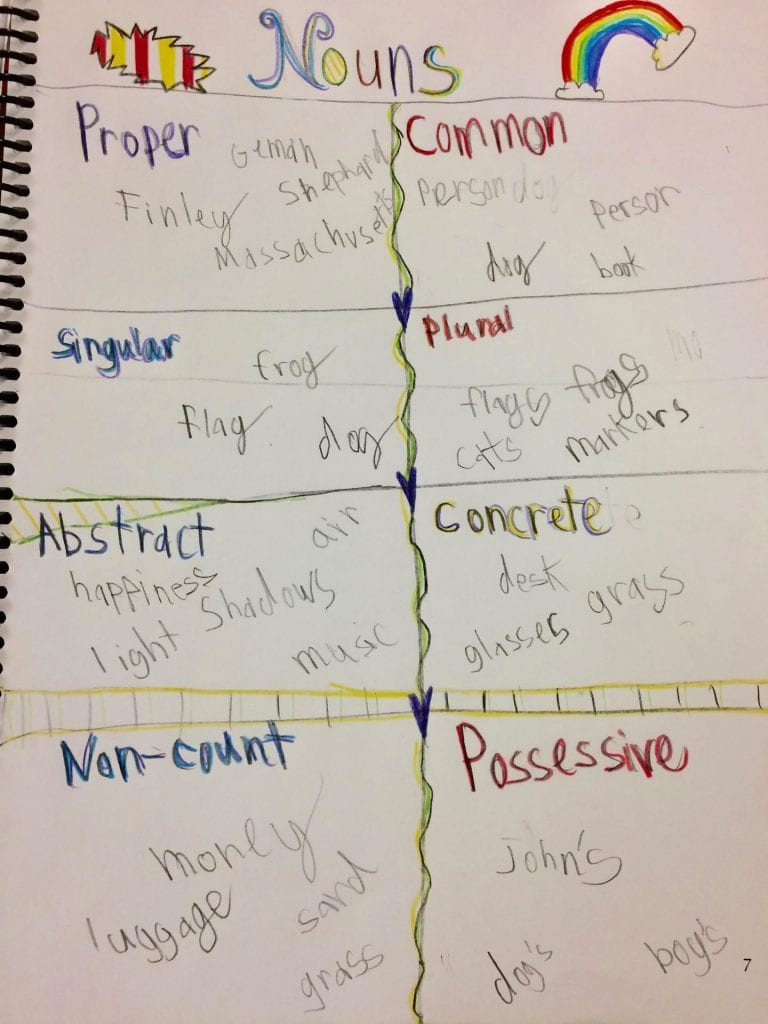 These are the categories we focus on, but I mention that there are other ways to categorize nouns as well.  Now that everyone has these eight categories in their book, I take a few minutes to review what each category is with an activity.  I ask the students to find a partner.  Then they are to decide who will be “A” and who will be “B”.  The deal is that person A has 30 seconds to point out, let’s say, singular nouns found in the room to person B.  After 30 seconds, Person B has the responsibility of pointing out, let’s say, plural nouns found in the room to person A.  At this point I pause the activity to see if anyone named a noun that their partner questioned.  If there is, we discuss it.  We keep on in this way, until all eight categories have been addressed.  When we are finished, and the students are back in their chairs, we talk about which categories were difficult to find examples of in our classroom, and which ones were easy.  Everyone agrees that the abstract and non-count nouns were not as easy to spot as the rest of the categories.  So we discuss and try to think of a few more examples of each that we might find in our room (such as happiness, responsibility, fairness, water, and sand).

On the next day we review the eight categories of nouns and then prepare to make a mind map.  Mind maps are a great way to think about what you know about a particular topic and then to put that information onto a single sheet of paper.  Before we begin writing anything down, I ask the students to close their book and help brainstorm what we know to be a fact about nouns.  As each person raises their hand and offers their fact, I ask them to write it on the board.  When I think that the important things have been named, I will then check what has been written on the board and quietly fix any spelling errors.  Now the students are to copy down these facts onto their paper.  I encourage them to leave white space around each fact instead of clumping all of their writing into one spot on the page.  I encourage them to use a bit of color, but I warn them not to color over words or to create patterns that draw the eye away from the information.  Here are a few examples of noun mind maps. 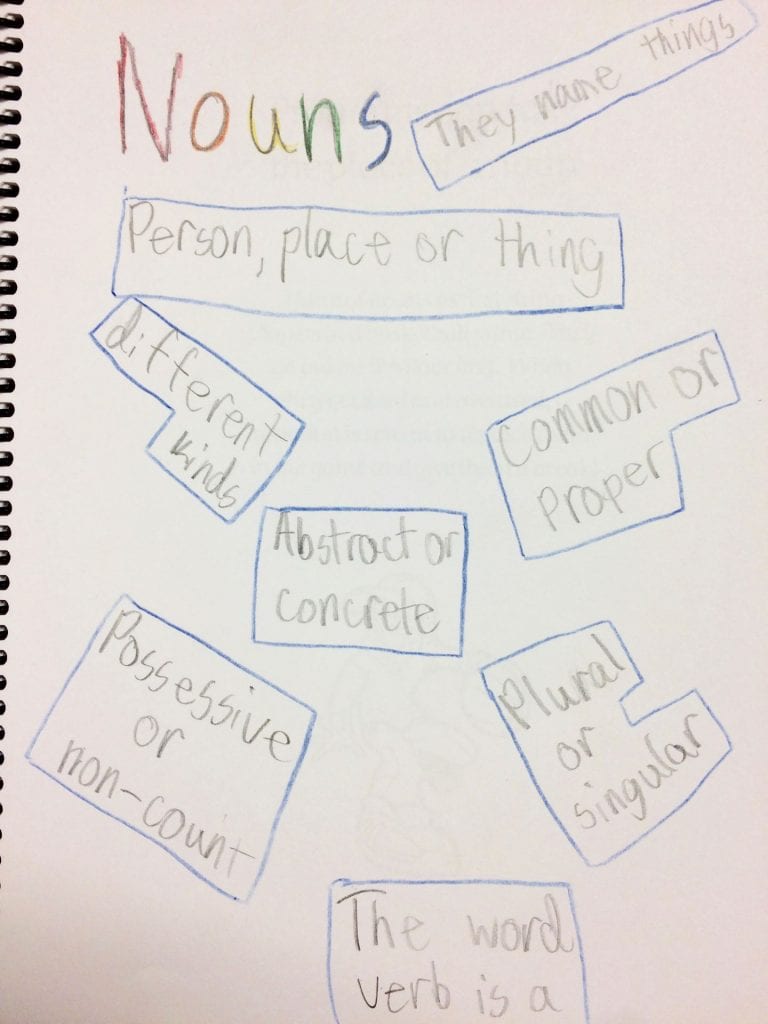 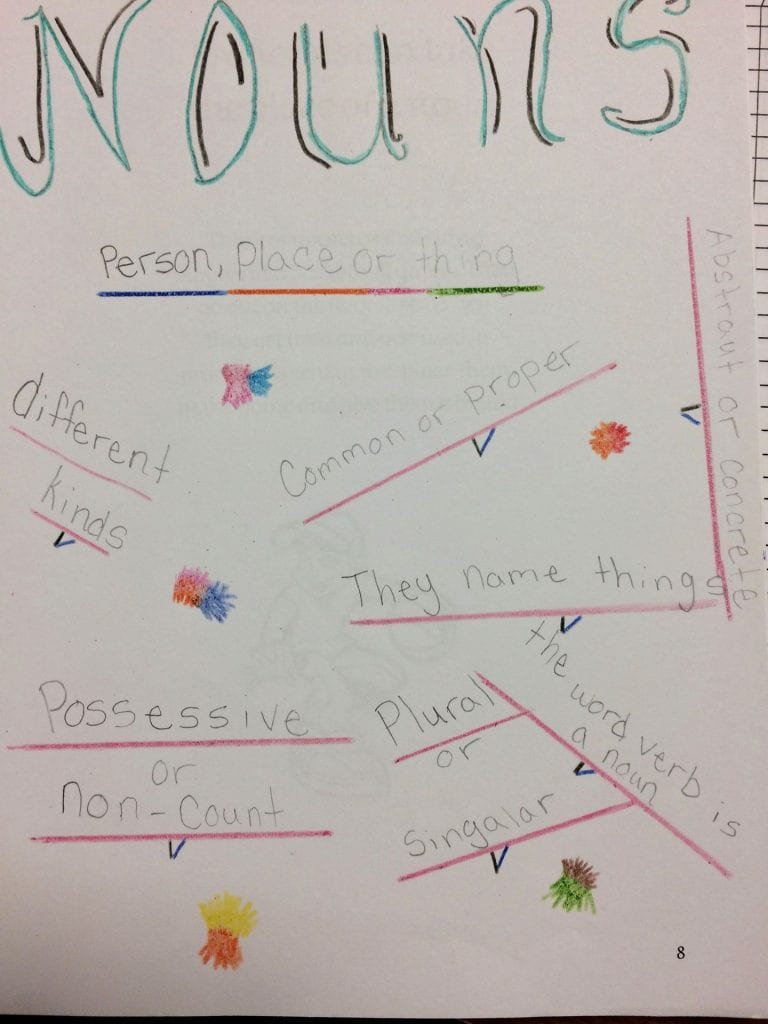 Now it is time to review familiar aspects of pronouns and to introduce new aspects of them.  First we talk about the fact that pronouns often take the place of nouns.  We look at lists of the subject and object pronouns.  We talk about which ones are first person, second person and third person.  We note the difference between the singular and plural forms of these pronouns.  Then we are ready for the next activity. It focuses on memorizing the subject and object pronouns.  I tell them that I want these pronouns to be familiar to them later on when we focus on the parts of the sentence.  For now, we’ll have some fun as we memorize them.

For this activity I randomly split the class into groups of 4-5.  Then I assign each group either the subject pronouns or the object pronouns to memorize.  The fun part is that they can add movements and rhythm if they like.  They have 7 minutes to put something together and to then present to the class.

It is a quick way to get these two important groups of pronouns memorized.  It is also an opportunity to get my students up out of their seats and to laugh together.

Next it is time to think about other types of pronouns.  I have them turn to the blank page in their interactive grammar notebook.  I have them write “6 types of Pronouns” in the center and then split the remaining surrounding area into six roughly equal areas.  I do the same on the board so the students can see what I mean.  I label two of the sections as Subject and Object, and the students fill in those two sections with the appropriate list of pronouns that they just memorized.  I label the rest of the sections as Possessive, Demonstrative, Interrogative, and Reflexive.  As we go, we fill in each section with examples of each. 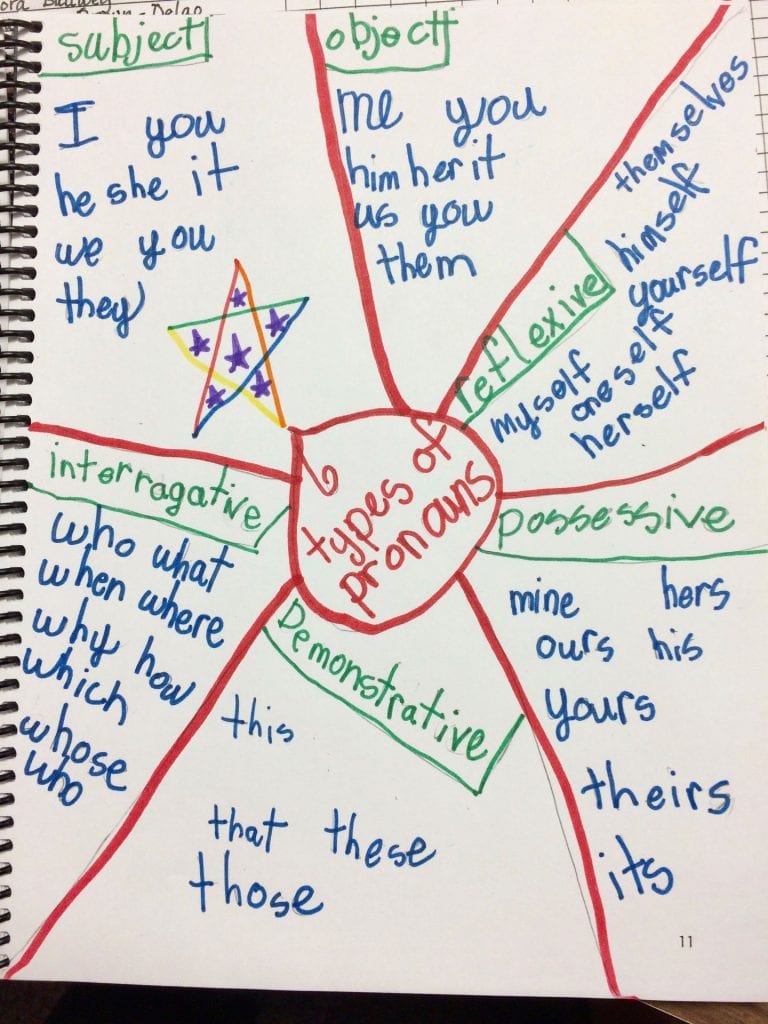 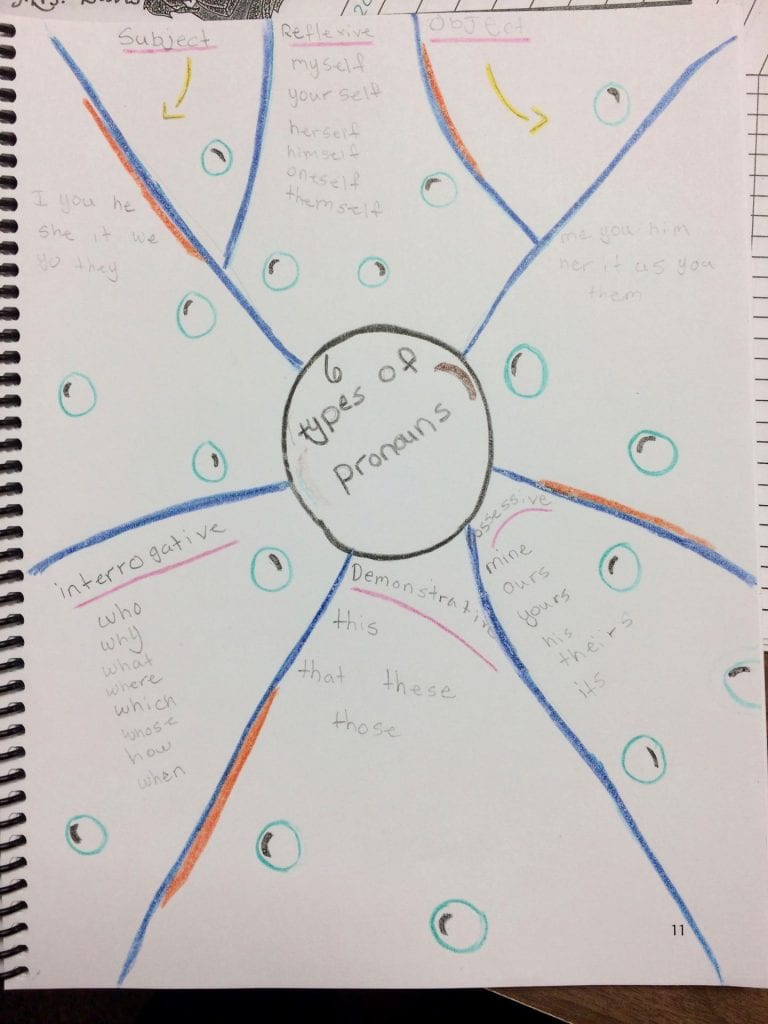 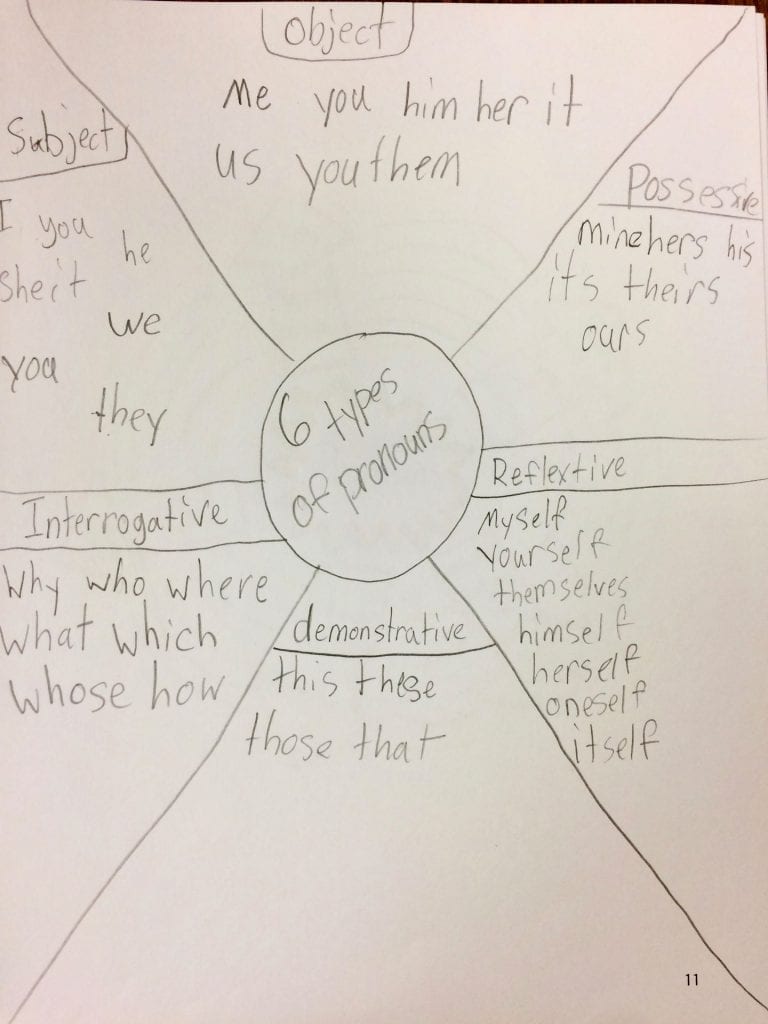 It isn’t necessary that the students memorize any of the other lists in this group since they now have this great page to refer to when we begin analyzing sentences.  I consider the subject and object pronouns important enough to memorize since they can play such important parts in a sentence.  As the students learn more about the parts of the sentence (subject, predicate, direct object, indirect object and subject complement) they will recognize that subject pronouns can be used as subjects or subject complements and that object pronouns can be used as direct and indirect objects!

The next day it is time for a pronoun mind map.  Once again, I write the word pronoun on the board and ask students to tell me one fact about pronouns.  When we have collected an accurate snapshot of pronouns, I invite the students to put the information on the next blank page in their grammar notebooks as part of our review. 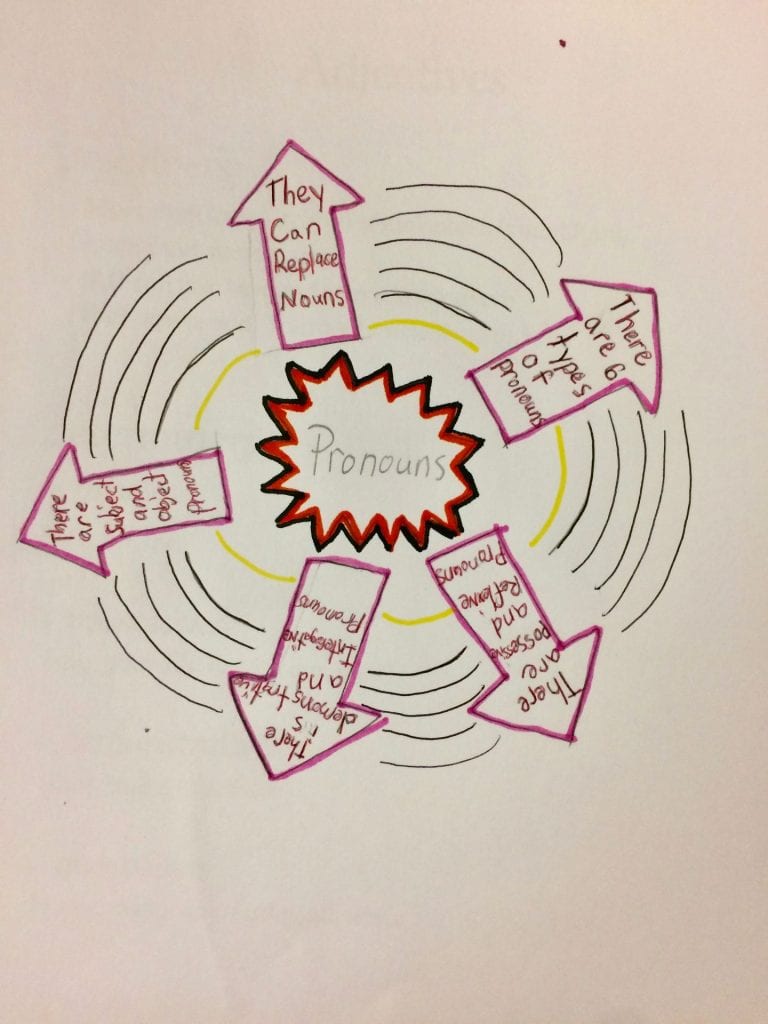 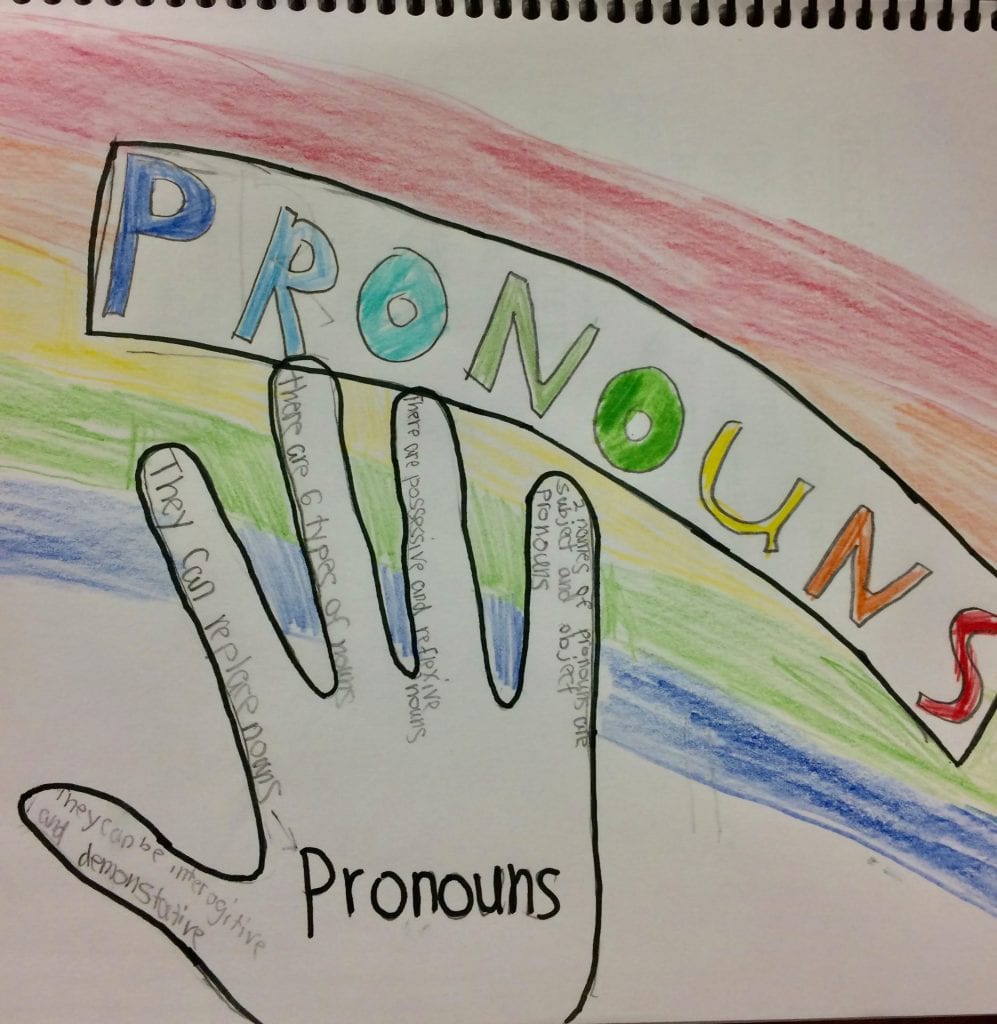 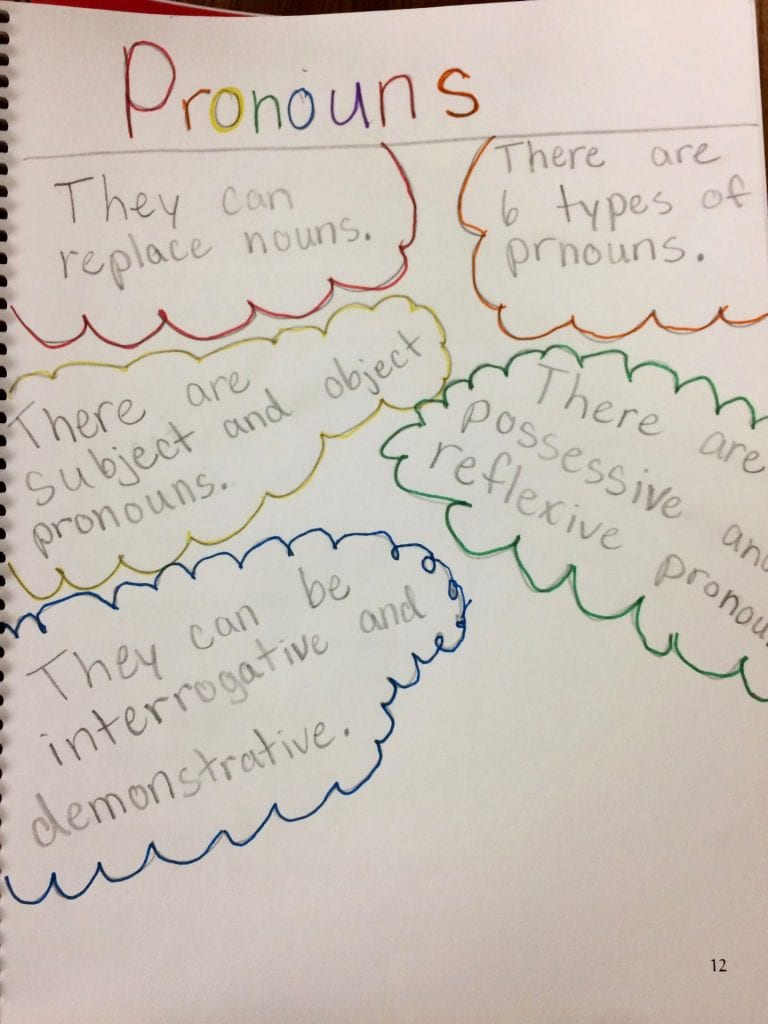 As you can see, the students are bringing out their sense of creativity as they think of ways to arrange the information on the page.  In doing so, they are also nurturing a sense of pride for this notebook.

The next part of speech that I review/introduce is adjectives.  This year I am teaching my students that there are two special kinds of words that fall under the heading of adjectives.  I am speaking of words that modify/describe nouns and words that announce/determine nouns.  I know that there are people who would categorize determiners as a separate part of speech, but I also know that many grammarians think of them as adjectives.  I have found it worthwhile and helpful for my students to understand what a determiner is and where to find it, but I  know that the teachers my students will work with as they make their way through middle school and high school do not identify determiners at all.  They lump them in with adjectives in general.  So in response to that, I am having my students identify determiners as adjectives, but I am explaining that their function is different than that of an adjective that describes/modifies a noun.

Once we have talked about these types of adjectives and practiced a bit by brainstorming short noun phrases that have a determiner, a modifying adjective and a noun, then it is time to look at these parts of speech in a sentence.  In that way we can begin considering the context in which we are using these words.  Some words, such as articles, are always articles no matter which sentence we find them in.  But that is not the case with the majority of words we use.  Once we have talked about the characteristics of each part of speech, it is important to look at specific sentences so we can talk about specific words and their functions within those sentences.

As you will see in the following video, my students rely on their grammar notebooks to be their personal resource book.  They are learning where to find the information that will help them make some decisions about parts of speech and later on, parts of the sentence.  They make choices when they identify parts of speech, but then must also be able to explain their reasoning for those choices.

At this point, I have collected their books just once so I could see where they are at with independently identifying these three parts of speech in a set of four sentences.  I recorded either a 3 (they get it), a 2 (they have some understanding, but need more practice), or a 1 (start over) for the page.  It is not a grade, but rather a point of reference so that when we get to the next set of practice sentences, I can compare and look for improvement.  All scores were either a 2 or a 3.  It’s time to move on to verbs!

2 thoughts on “Getting Going on Grammar”