We had a lovely first dip into Etymonline today.  It wasn’t planned, but if you encourage question-asking, it’s just the sort of thing that is bound to happen.

We were talking about suffixes.  One group of students had identified <-ly> as a suffix and had given the words lovely, bravely, and homely as evidence that it was indeed a suffix.  A second group who was asked to carefully consider the evidence offered by the first group was wondering about the word <homely>.  They had never heard of it, and they couldn’t determine whether or not it had a suffix until they knew the word.  Bravo, right?

After thanking the second group for their brilliant question, I brought the word <homely> to the attention of the entire class.

“Does anyone know this word?”
“I think it means something to do with your home.”
“Are you thinking of homey?”
“Oh, yeah.  That’s the word.”
“Does anyone else have any ideas?”
“Is it a person who likes to be at home a lot?”
“Great thought! But you are describing a homebody.”
“Right.”
“Anyone else know what this word might mean?”

I waited a bit and gauged by their faces that they were out of ideas.  I must say that I was surprised that no one had heard of this word.  Our next course of action was to go to Etymonline and find out the story of homely.  Was it related to home, homebody, and homey?  None of us knew the answer to that one.

Here’s what we found.  The word <homely> was first attested in the late 14th century.  That means that there is written evidence of the word existing then.  There is no written evidence from dates earlier than that.  At that time, the word was used to mean, “of or belonging to home or household, domestic”.  In Middle English it was spelled hom and had the same sense of “home”.  Since, at that time, most homes were not fancy, it also took on the sense of “plain, unadorned, simple”, which extended into “having a plain appearance, without particular beauty of features, crude”.  That last sense has survived in the United States where it was the usual term for “physically unattractive” and referred to things other than homes, including people.

At this point the students let out a surprised, kind-of-unbelieving laugh.  How unexpected!  So a person is called homely with the idea of a plain unadorned home in mind.  Huh!  We kept reading.  Such a person was also said to be ill-tempered.  We decided that we would not want to be referred to as homely.  It was not a very positive view of another person.  It was particularly interesting to note that while this word continues to have this sense of physically unattractive in American English, it never did in British English.  In British English it has always referred to the home, with a sense of a simple, yet comfortable and cozy place.

We also read that the words homelike (1789) and homish (1560’s) referred back to the domestic sense of the word.  Another word in this family that sounded rather odd to our ears was homelily.  It’s an adverb, first used in the late 15 c., and its structure is <home+ly+ly –> homelily>.  Did you see what happened there?  The <y> of the <-ly> suffix of <homely>, toggled to an <i> before the final <-ly> suffix was added.  We had to think through this carefully before pronouncing it.  We thought of happily, sleepily, lazily and imitated the stress patterns in those words.  We checked to see if it could be found in current dictionaries, and sure enough, it was there.

This word presents such an intriguing idea!  Embedded in the word homely is the thought that we are a reflection of our homes!  (After school I googled information about people as a reflection of their homes.  I found quite a few articles about how the colors we paint our walls, furniture and front door, and the patterns we choose for our furniture, drapes and bedding all reflect parts of our personalities.  Even the art we choose for the walls reflects who we are!  I will ask the students tomorrow what they think of that idea!)

Other related words that we brainstormed were:

homey (adjective, meaning pleasantly comfortable and cozy)  *** We checked with our Oxford American Dictionary to understand why the <-y> suffix wasn’t replacing the final non-syllabic <e> in this word.  We found out that homey and homy are both accepted spellings.
homier
homiest
homebody (a person who prefers to spend a lot of time at home)
homie (noun, meaning a person from your hometown or friend group, 1920’s – compare to homeboy, chiefly U.S. use)
homies
homelike
homish
homespun
homerun
homeplate
homemade
homesick
homework
homeless
homelessness
homecoming

As usual, the longer we thought about it, the more words we could think of.  We drew a matrix on the board and added words as they were suggested.  It got a bit congested and messy.  Here is a version I created at Mini Matrix Maker. 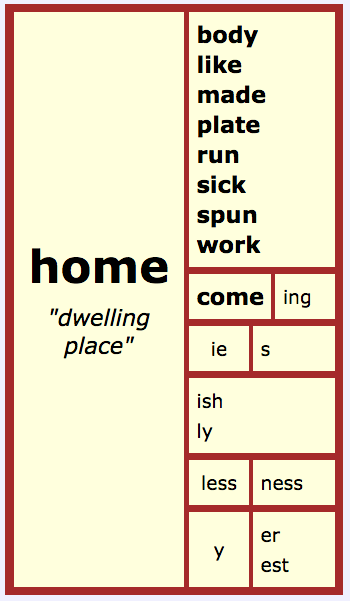 Tomorrow I intend to share this entire inquiry with my other two groups of 5th graders! Homey or homely?

One thought on “Home and Homely – What is the Connection?”