The first time I heard the term phonestheme mentioned, I was taking an online class.  The presenter was talking about words that have in common a specific set of letters representing a specific pronunciation. The surprising thing is that the words also share a broad meaning.  Let me give you an example:  The letter string <gr> is initial in the following words:  groan, growl, gruff, grump, grunt, grouch, grate and grief.  Pretty obvious, right?  Now when you stop and think about the meaning of each of those words, there is a common theme here.  It is one of low unpleasant sounds.   Cool, huh?

Here’s another:  The letter string <ump> is final in the following words:  bump, dump, stump, lump, slump, hump, and rump.  When you stop and think of the meaning of each word, there is a shared sense of heavy and compactness, isn’t there? Once you begin an investigation of your own, you will be surprised at how many of these phonesthemes there are.  If you are like me, you will ask yourself, “How could something be right there in front of me all my life, yet I didn’t see it?”

With phonesthemes, it takes a bit of slowing down and thinking about each word to really appreciate what has happened here.  These words share a sound and a broad meaning without sharing a heritage.  They do not all originate from the same language, and they do not all share a root.  It makes a phonestheme all the more fascinating.  When I ask my students to investigate phonesthemes,  they willingly agree.  It seems like such a simple assignment.  If the phonestheme is initial, I recommend they grab a dictionary so they can check to make sure there is a shared sense of meaning.  A surprising number of words have phonesthemes, but just because a word has a letter combination (<gr> for instance),  it doesn’t necessarily mean the word shares this phonestheme for sure.  Here are some of the posters my students created. 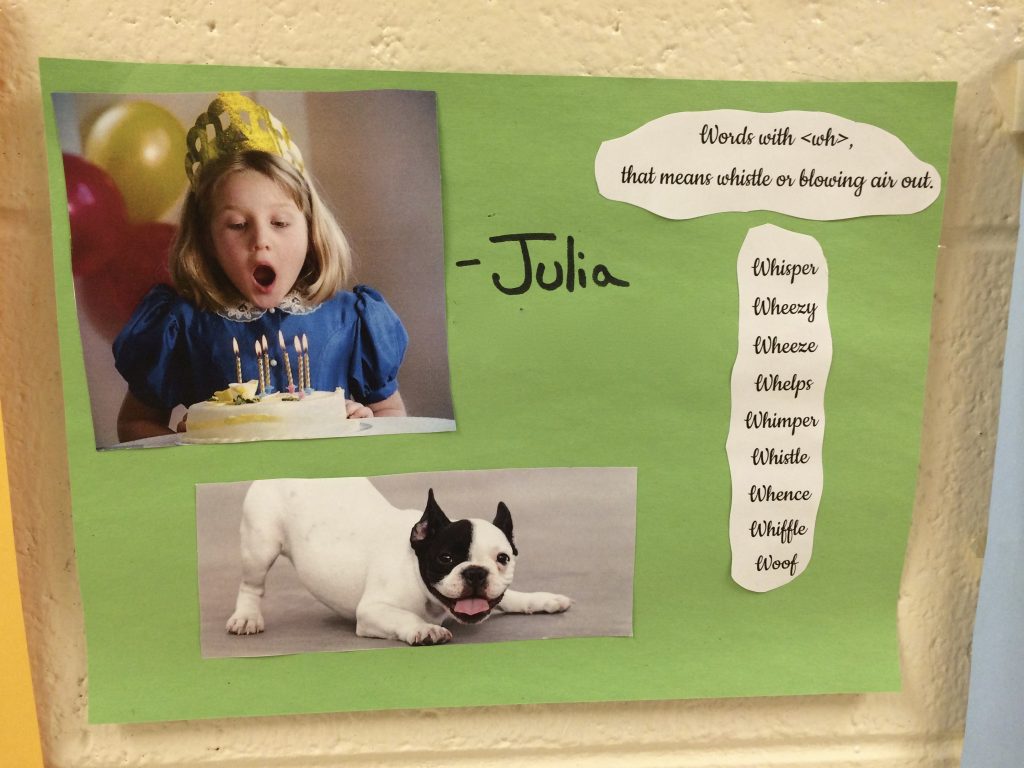 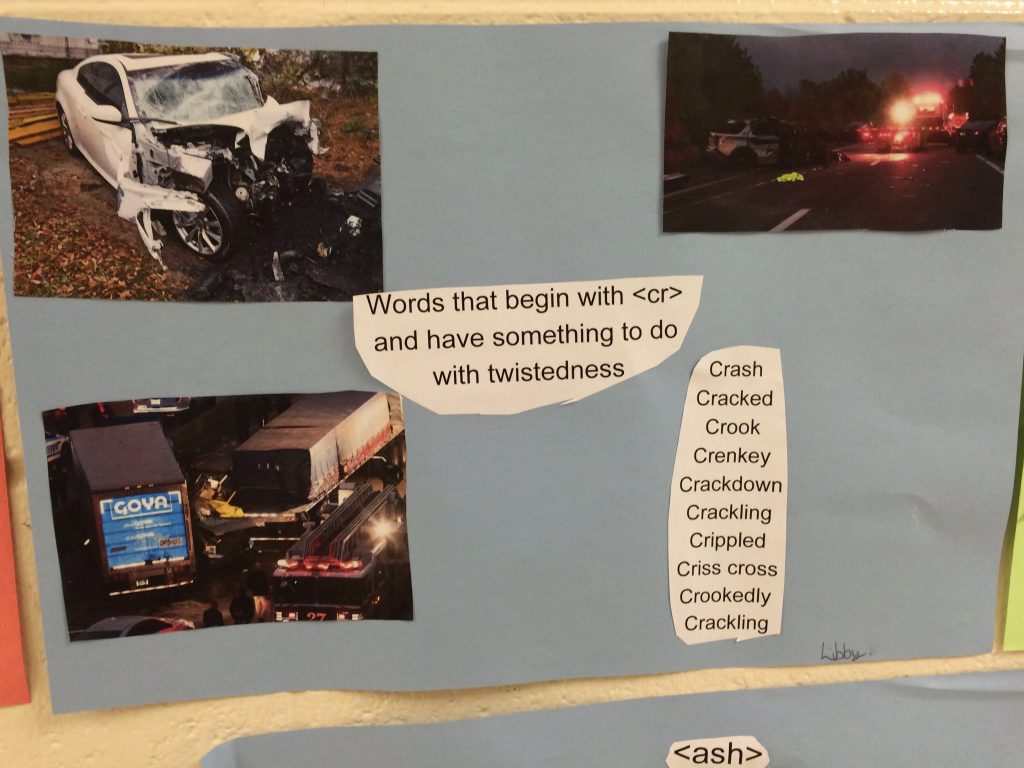 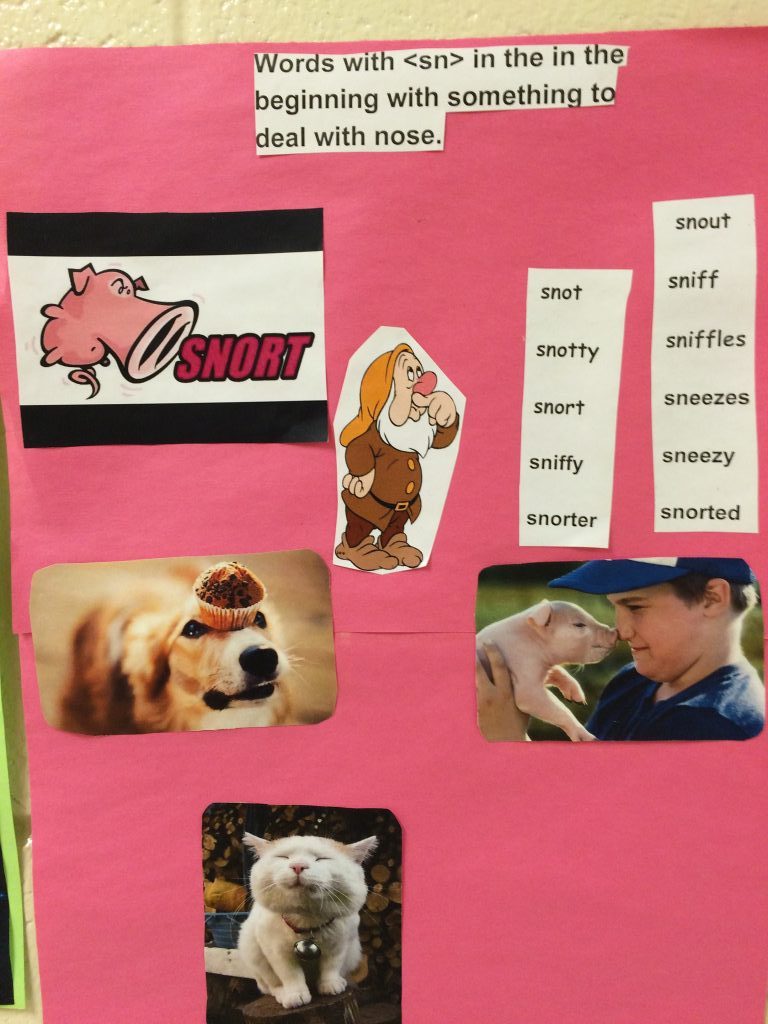 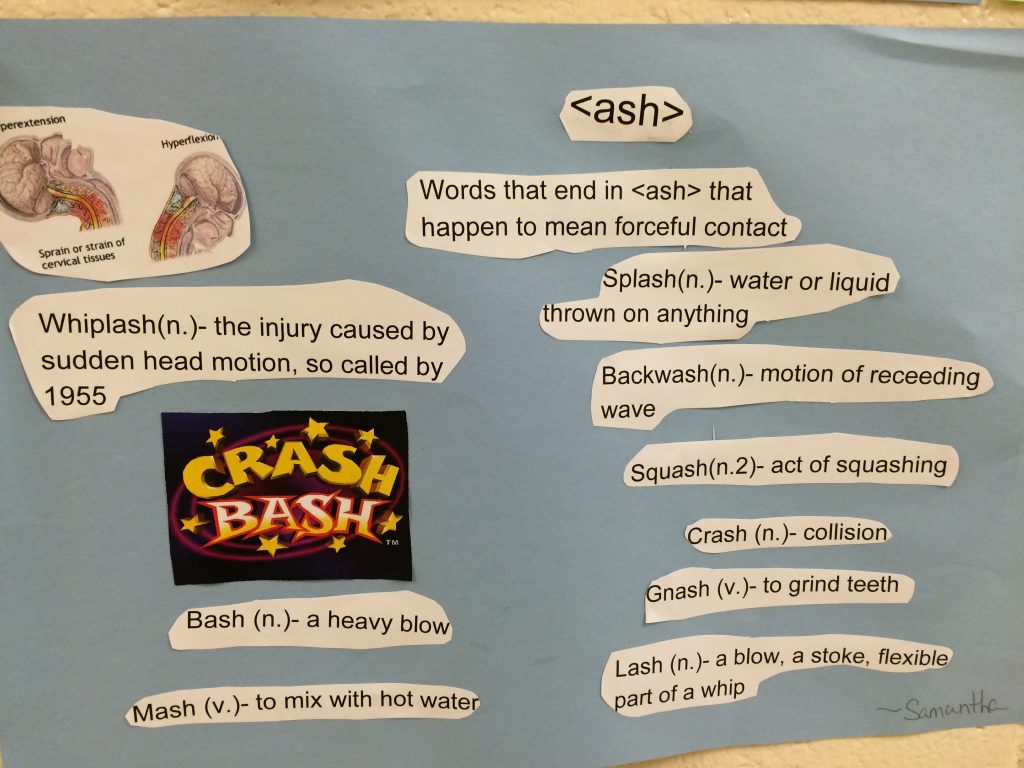 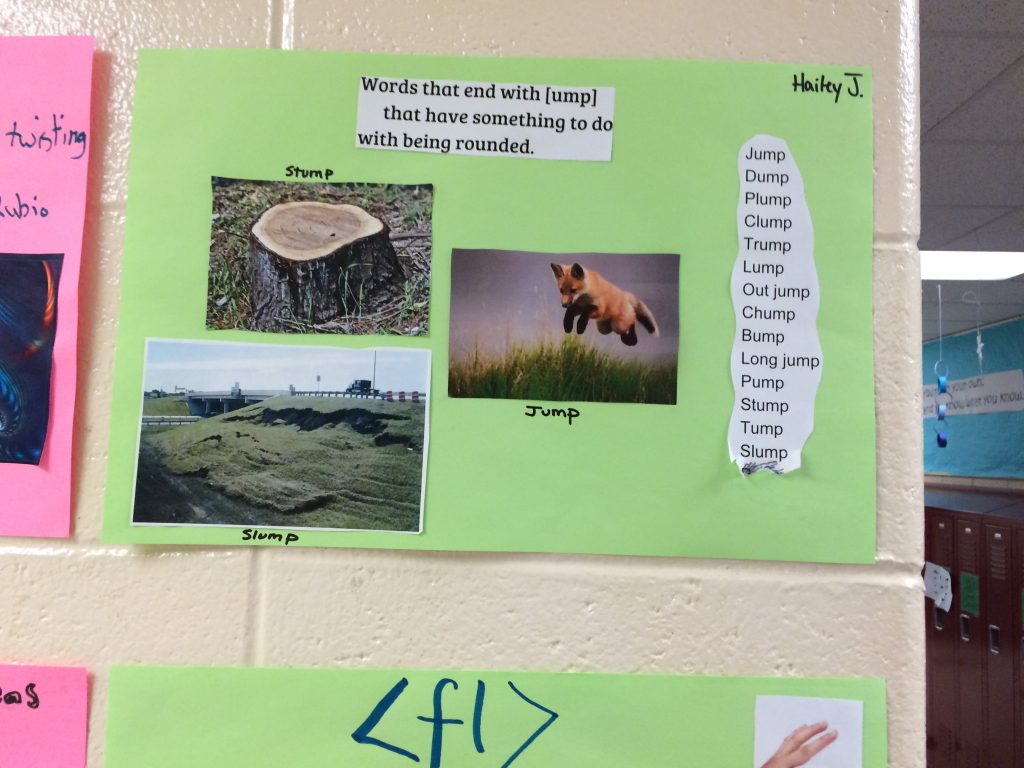 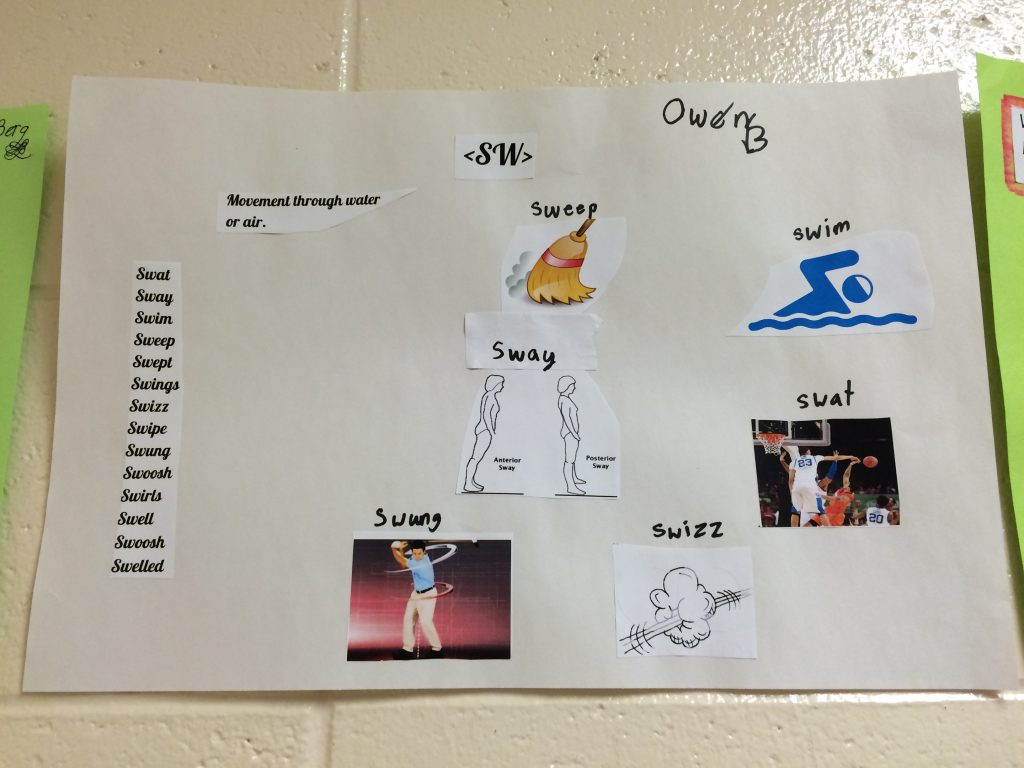 So now what?  My students have each had the opportunity to collect words that fit as a particular phonestheme.   Last year I asked my students to write poems using a particular phonestheme.  Some of the poems were fantastic.  Some felt forced.  I wanted to have them write, but we needed to talk about poetry in general first and the role sounds of pronounced words play.

I pulled out my new book by Michael Clay Thompson, A World of Poetry.  I read to them, “Poetry is not just expression in words.  It is also expression in sounds.  Poets compose sounds; they choose words that contain the sounds they need, and then they arrange the words into a composition that is an artistic combination of words and sounds.”

I read more from his book.   We talked about the vowels and the consonants, and how some consonants are breathy (like /s/, /f/, or /h/).  We said aloud other consonants like /v/,  /j/, and /z/ and found them to be hummy and buzzy.  We talked about how some pronounced letters remind us of movements or nature sounds.  I read examples of poems with end rhyme, internal rhyme, eye rhyme, and even no rhyme at all.  And then we were ready to play, to experiment, to explore.

The directions were to go out into the hall and look at all the phonestheme posters completed by classmates.  While reading the lists of words, they were to think of something to write a poem about. It was to be a poem that could incorporate words from several lists.  The words needed to fit.  I was not looking for every other word to be a phonestheme, and the poem to be about nothing.

I let them think through this and begin writing for about 15 minutes.  Then we stopped and talked again.  Some really knew what I was looking for, some did not.  I asked for some volunteers to share what they were working on so far.  I have found that this step gives the students who are unsure a better idea of what others are writing, and then they are able to think of what to write for themselves.  The point was to use the feel and meaning of the words with phonesthemes to improve the feel and meaning of the poem!  Here are a few of the finished poems.

The Former World Has Passed Away

The former world
has passed away.

Now the only
beauty in the world
is the glimmering glaze
of stars above.

Blowing, moving,
huffing and puffing
in your courageous way

If only I was as powerful as you,
WIND

He fled.
With a whoosh
he was gone –
gone down
that glossy field.

He was a flash,
a glimmer of speed,
a whisper taken away,
a glowing star.

The flick of his feet,
the glamor of his stride,
and when he finished,
a glint of pride.

My Little Sister and Me

My little sister
flings dust
in the places
I already swept
because I told her
to get out of the room.

I get so mad
I hit her.
She whacks me back.
I flip out,
my anger
flashing in flames.

Roots of the Past

See that stump?
It used to be a tree.
Now it’s just a clump
of what it used to be.

The tree is dead.
The stump is here.
The canopy’s lost its head.
The poor tree’s fate is clear.

The swoosh of air that I feel
as I enter the water to swim.

The sweat tearing off my skin
into the swaying water.

Swoosh!  I pass everyone else
swimming next to me.

And that sweep of success
when I swoosh into the wall.

There was a candle
so bright and new
until somebody lit it.

The flame flickered and flicked
and magically grew.
It glittered and glistened
and gleamed out of sight
and swiftly swooped down
and died in the light.

I saw this poetry writing as an opportunity to play with words as one might play with Play-Doh.  We don’t always know where we are going to end up, but we start by picking something to create.  Then we add and take away  and keep doing that until we are pleased enough to share.

3 thoughts on ““Learn to see what you are looking at.” –Christopher Paolini”