Our performances are over.  Two weeks of running lines and rehearsing ended with two days of wowing our crowds with our knowledge and our sparkle.  Today Sam called to me from his locker where he was tying his shoe.  “Hey, Mrs. Steven!  I have a new appreciation for a leaf now.  I never realized that the leaf is where the sugar and oxygen is made!  Now I like leaves more than ever!”

And well he should!  One of the amazing facts students read towards the end of our performance is, “One million acres of corn can produce enough oxygen in eleven days to supply ten million people with enough oxygen to breathe for a whole year!”

One of the big things learned here was the fact that we have a pretty amazing relationship with plants.  Think of it.  We’re sitting around exhaling carbon dioxide.  The plants are sitting around “exhaling” oxygen.  We are happy to use their byproduct, and they are happy to use ours!  One might call our relationship symbiotic!  We are two living organisms receiving mutual benefits. 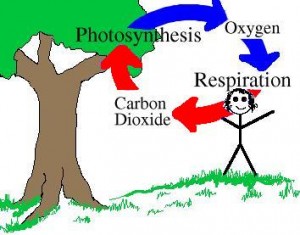 Since we finished our play, I wanted to know what each individual student understood about the photosynthesis process.  First I gave a short answer test.  By short answer I mean full sentences – as many as needed to answer each question.  Out of 58 students, only 10 missed more than 3 questions!  I call that success!  But I am never satisfied with only one assessment type.

Next I asked the students to write out the process as if they were explaining it to someone who had never heard of it before.  The subject matter didn’t require any further research.  The play provided all of the information needed.  All the students had to do was to retell the information in a logical way and develop paragraphs that would enhance the reader’s overall understanding of photosynthesis.

Students began by freewriting.   That means that they retold the story without stopping to check on spellings.  When they felt they had written what they understood about photosynthesis, I asked them to check their paragraphing.  If they had only one paragraph, they were to mark where they might split that one into several.  I suggested they look at their use of the word ‘then’ to begin sentences.  Often it is used as a transition word.  (Often it is overused as a transition word!)

“Chloroplasts are very, very small beings (so small that you need to look at a thin slice of leaf under a high-powered microscope to see them) that live inside cells in a plant.  They make food for the plant and oxygen, which we need, using photosynthesis.”      ~Brynn G.

“Water gets pulled out of the roots by a tube called the xylem.  Water normally doesn’t flow up, but in a plant and even in a tree, water is sucked out of the roots.  This process is called transpiration.  The water will mix with the carbon dioxide to make sugar.”      ~Jada

“The light energy gives energy to the carbon dioxide molecules and the water molecules.  Together they make one molecule of sugar (or food) and six molecules of oxygen. ”        ~Perry

“There is another tube called the phloem.  The two tubes are like elevators.  The xylem takes water up the plant and the phloem takes sugar down to the roots of the plant.”        ~Hailey J.

“Photosynthesis helps everything on planet earth that breathes oxygen.  Without photosynthesis, everything would die out because nothing else can produce oxygen.”            ~Elijah

Having my students write a narrative of the photosynthesis process has been great for two reasons.  First off I can tell how much they really understand about what happens when a plant makes food.  Overall, I was very impressed with the detail they remembered from the script.   Secondly, I can look at their writing skills.  Many of my students do not yet fully understand how to convert a thought into a written sentence.  They either connect sentence after sentence after sentence with conjunctions (will this ever end?), or they isolate a prepositional phrase, capitalizing its first word and putting  ending punctuation after its last word.

This writing was a great opportunity to address the idea of transition words.  As I was able to conference with each student about revising and editing, writing a sentence became a bit clearer of a task as well.  We just need to keep on writing!