At the beginning of the year I asked my students to write me a letter.  It was a way for me to get to know them.  It was also a way for me to assess their writing skills.   I gave them prompts for each paragraph so that they didn’t have to wonder what to write.

The first time I read through them I just plain enjoyed hearing each student’s voice – the way they talked to me on paper.   I got a peek into their “outside of the school day” life.  I will look back at these letters often throughout the year to remind myself that each child is so much more than what I see in 90 minutes each day.

The second time through I kept track of things so I would know which writing skills each student needed to improve on.  I specifically made notes about:

One of the unexpected finds was inconsistent letter formation.  Lower case g’s, j’s and p’s were the same size (height-wise) as a’s.  The letter p was often capitalized, even when it didn’t make sense to do so.  Lower case h’s and n’s were difficult to tell apart, as were i’s and j’s!  This made some student writing very difficult to read.  Not everyone’s letter formation was this inconsistent, but paired with the students’ lack of awareness for white space on the page, I made a decision to teach them script. 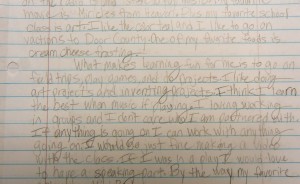 I am so glad I did!  As we moved forward with this and learned about proper posture and paper placement, I began to notice some rather peculiar ways in which students gripped their pen!  Most involved forcing the joint nearest the index finger tip to bend counter to its natural bend.

I recognized that tightfisted grip because it’s the same one I have used for most of my life.  For me, it forced the pencil or pen I wrote with to push against the same first joint of my middle finger, and I ended up with a rather large callus.  I remember that my elementary teachers called it a “writing bump” and spoke of it as a wonderful thing that indicated how much I loved writing.  Even though it became painful to write with such a huge callus,  I accepted that explanation in the same way I accepted so much other misinformation about writing and our language.  After all, what other way was there?

Learning a more comfortable pen hold felt odd at first, but within a month, most were enjoying the switch.The students have been able to choose between two pen holds.  One is similar to what they were using, it’s just that the index finger remains relaxed along the length of the pen.  The middle joint is free to control the movement of the pen instead of the wrist (which controls the movement when the pen is held in a tight grip).  I personally use a plume hold so that my index finger doesn’t fall back into its old habit of forcing that joint closest to the finger tip to bend in an unnatural way. 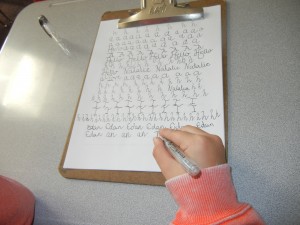 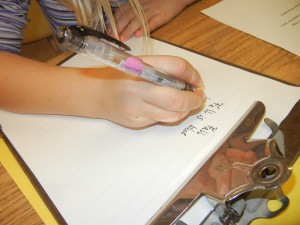 I first learned script from Real Spelling.  I’ve taken the spellinar offered, and I’ve watched the dvd’s, pausing to practice certain letters and flourishes. Chancery Script itself dates back to the early 16th century.  An Italian scribe, Ludovico Vicentino degli Arrighi, wrote a pamphlet in 1522.  It remains quite influential as it describes the writing of Chancery Script.  It is called La Operina.  Chancery Script was developed by scribes who spent their lives copying documents and needed a comfortable yet aesthetically pleasing writing.  Here is a sample of Arrighi’s writing from La Operina.

For starters, we focused on holding up our hands and imagining that the body of each lower case letter had a consistent height.  You will understand this best if you try it.  Hold up your hand and draw an X across the palm with your finger.  That is what we call the “X height”.  If you are writing the letter b, you would begin in the ascender area (tips of your fingers) and pull down to the bottom of your palm (bottom of the X).  Then you would bounce back up to the X height’s right corner before pulling down again to complete the letter.  As the combination of proper posture, a relaxed pen hold and the use of a fountain pen meld together,  the pen strokes become less independently drawn, and become more of a flowing movement, as if the pen is dancing across the page!

We spent time each day practicing our lower case letters and the ligatures we might use to connect certain letters.  We learned some flourishes to use with lower case letters, and practiced them so we could make personal decisions as we developed our personal style of script. 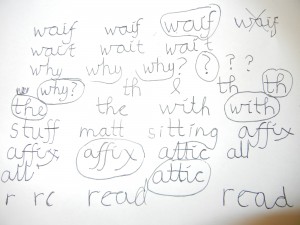 The capital letters are done a bit differently.  They are drawn.  They can be of a different size then the rest of the letters depending on your purpose for writing and the space you have available.  The students were enthusiastic to see possibilities for the initial letters of their names.  They were particularly impressed with Queen Elizabeth’s signature and wanted to develop their own.  Here are some samples of the students practicing Queen Elizabeth’s signature.  The first picture is her signature.  Notice the flourish at the beginning of the lower case b and the knotting below the z! 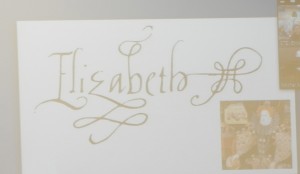 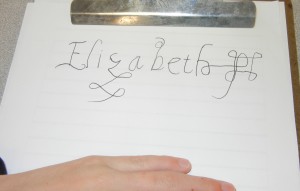 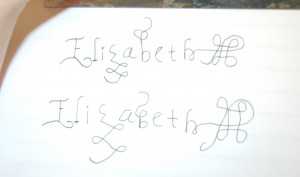 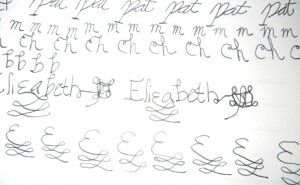 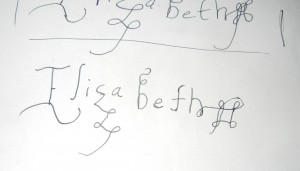 The following pictures are of the students practicing some capital letters. 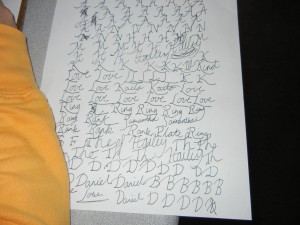 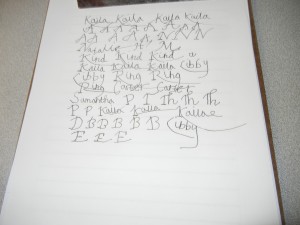 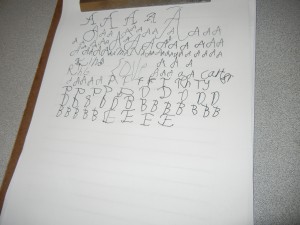 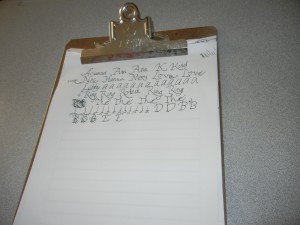 As you can see, the students write on unlined paper, but use an underlay so that the writing remains straight.  The lines on the underlay are a bit wider apart than regular lined paper.

The next step was to create a sheet of writing in script.  Some had already been turning in assignments in script, but not all.  I asked each student to write a fall poem.  I gave them a poem to model it after.  The poem would have three stanzas.  In this way we could practice not only script, but also using white space on a page.  As the students finished their poem (which was now a work of art on several levels), I hung them in the hall. 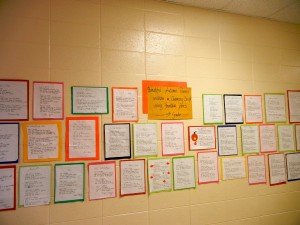 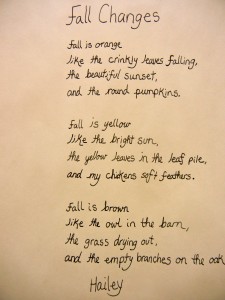 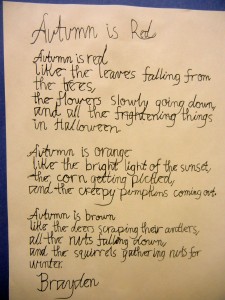 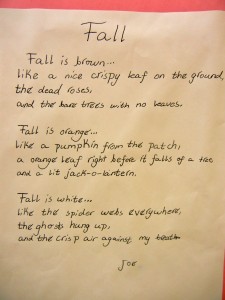 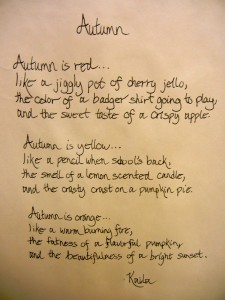 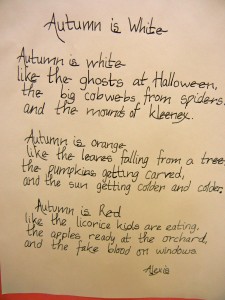 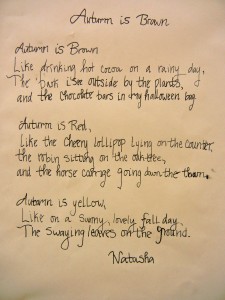 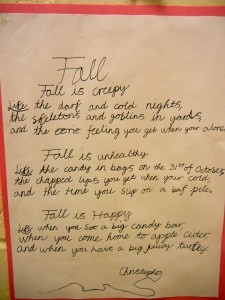 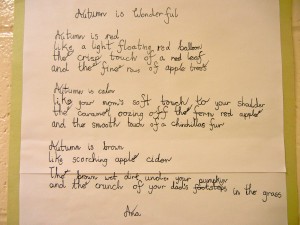 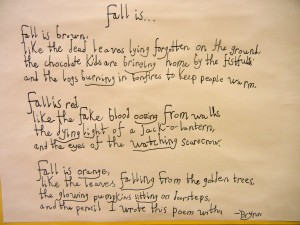 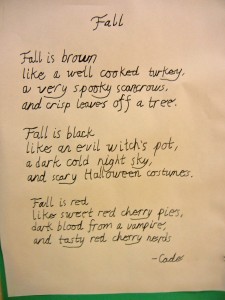 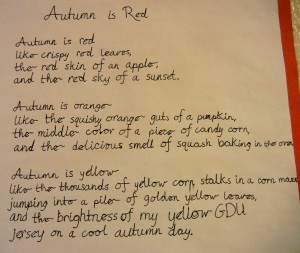 There’s quite a difference between the first day letters and these poems!  Not all students are using script consistently yet, but the majority already feel a personal pride they never felt before!  In the following video, the students explain what it is they like about writing in script.