Yesterday I gave the students a piece of paper that was divided into 10 areas.  In each space I had written one of the following bases:

I had them start in the top left space.  I told them they had 60 seconds to:

They panicked about the 60 seconds at first, but when the 60 seconds were over, they realized it was plenty of time to do what was asked.  I chose 60 seconds so that they would draw the first thing that popped into their head.  I did not want them to think too hard about the perfect thing to draw.  I had them draw because many students will be able to remember the image of the denotation more quickly than the denotation by itself. 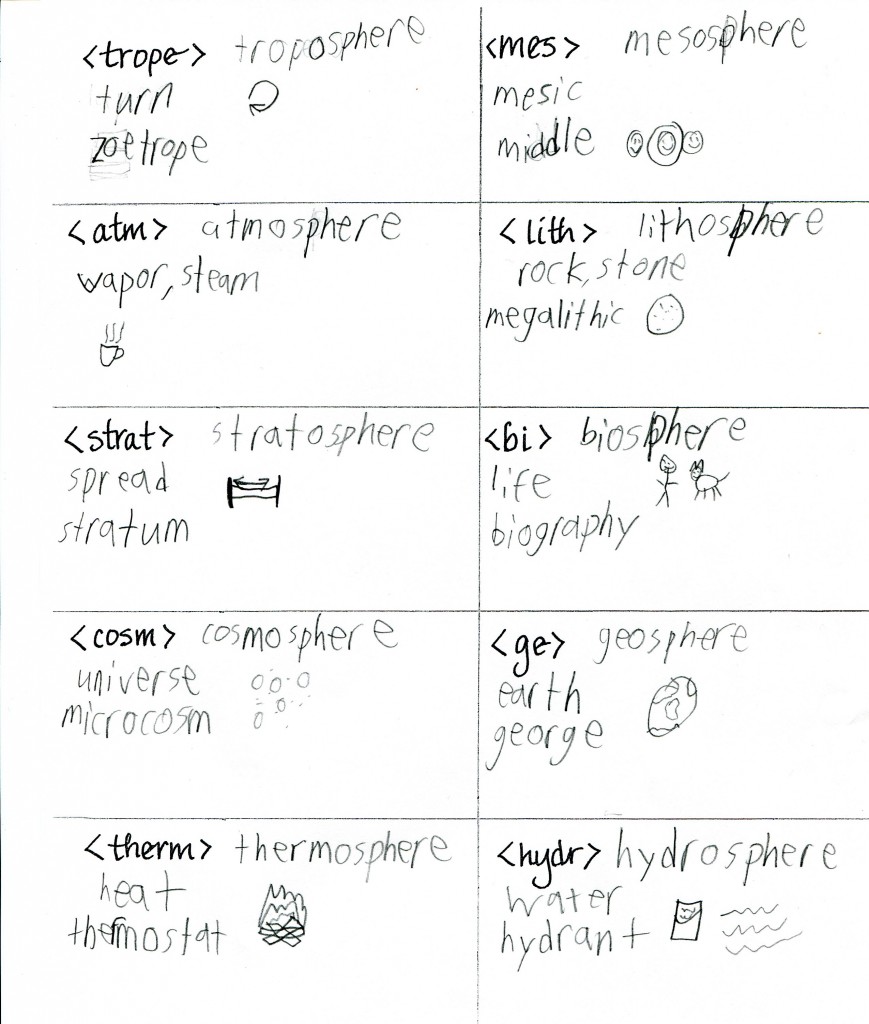 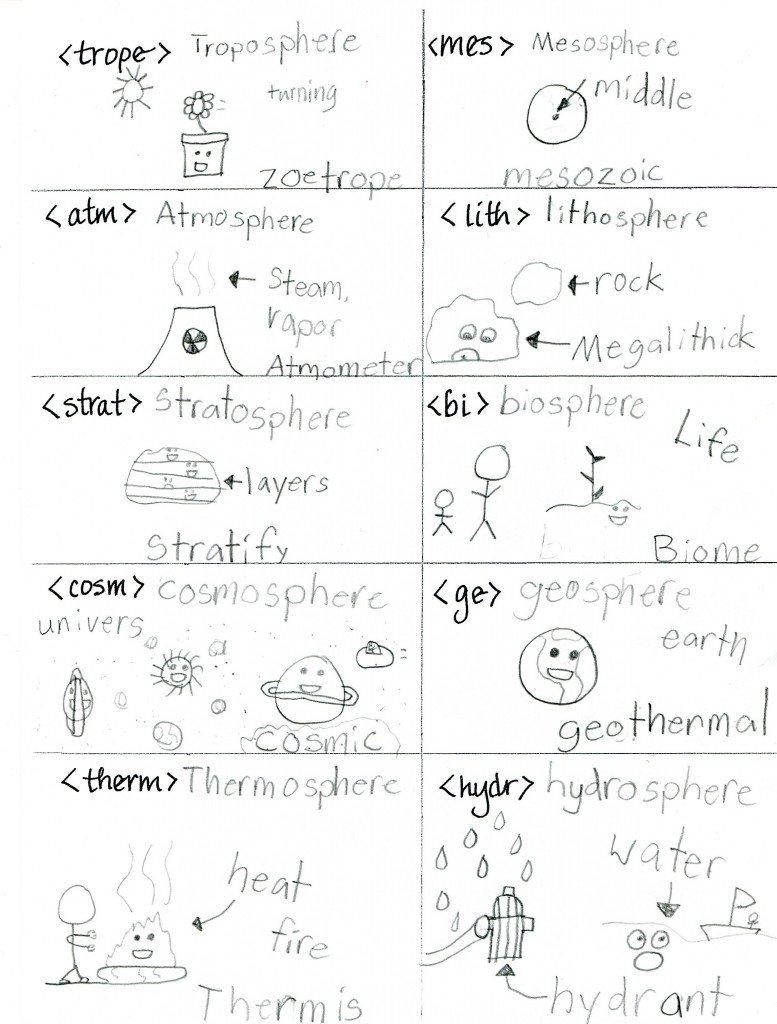 After we finished the tenth base, it was time to review and share.  Volunteers read aloud each compound word, pausing slightly between morphemes. It was so obvious that they understood that all of these words shared a structure.  Students who would have balked at spelling these words several weeks ago, now confidently spelled them.  Their understanding of morphemes and the meanings they contribute to a finished word has been growing!

When I asked for the words they thought of that shared the first base, things got interesting!  The white board quickly filled up.  I had to start making a list of words that I wasn’t familiar with.  “After all,” I said to my students, “just because I haven’t heard the word doesn’t mean it isn’t in use somewhere!”  The thing is, all of the words they suggested looked and sounded convincing.  In other words, structurally they all worked! 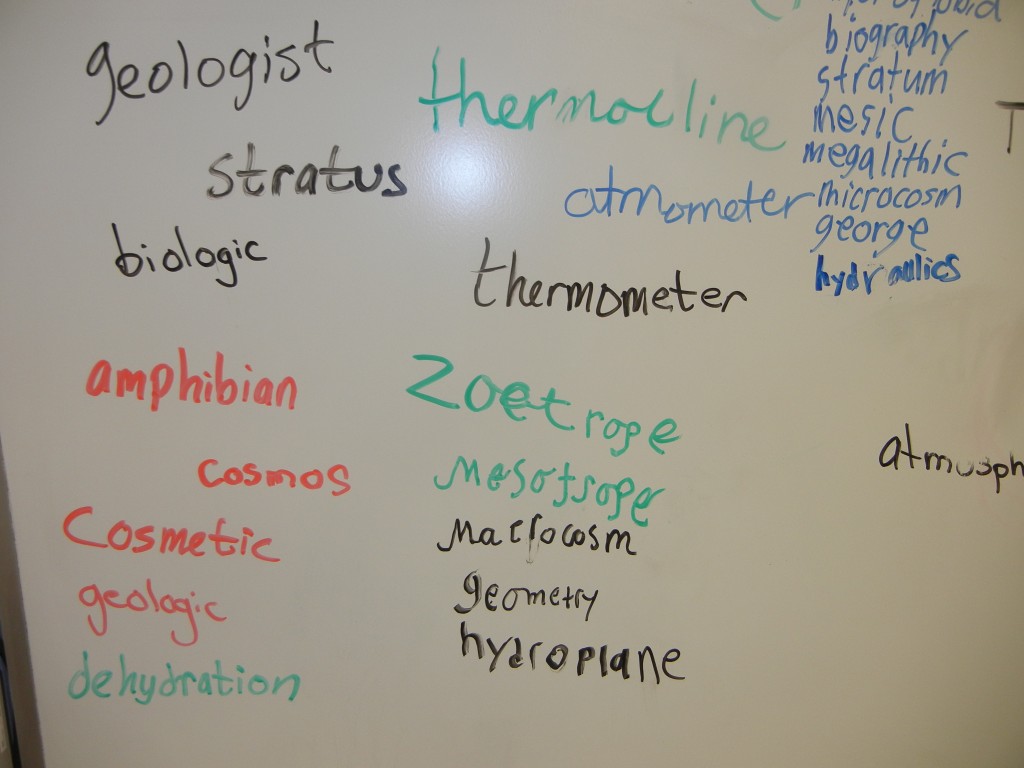 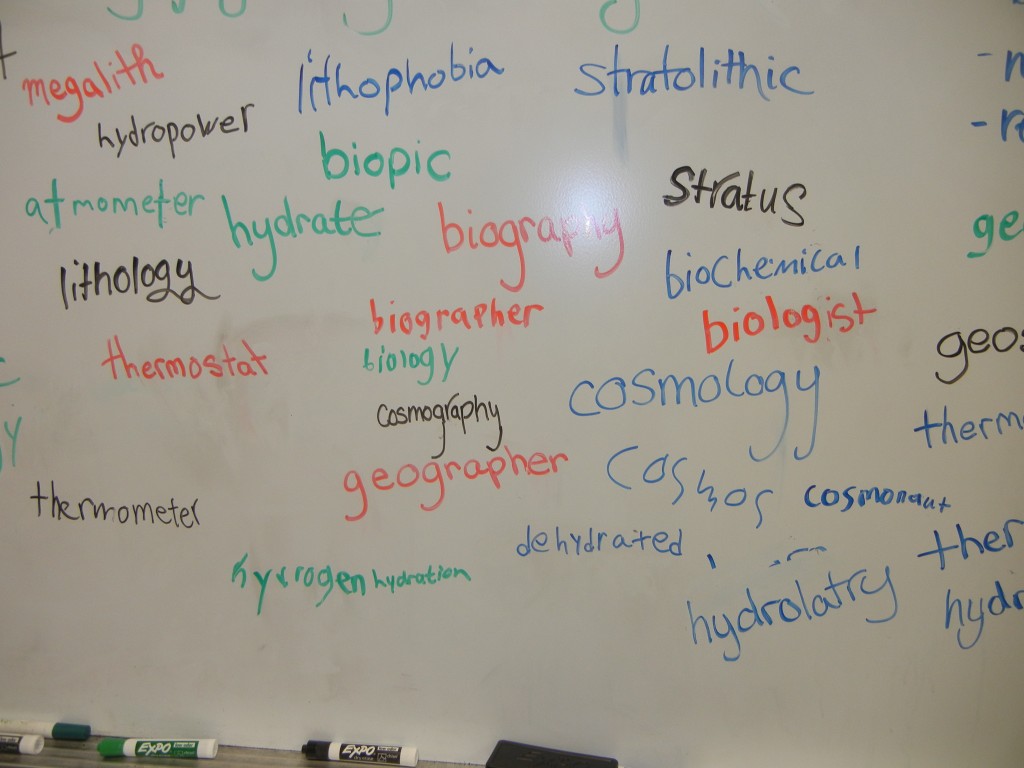 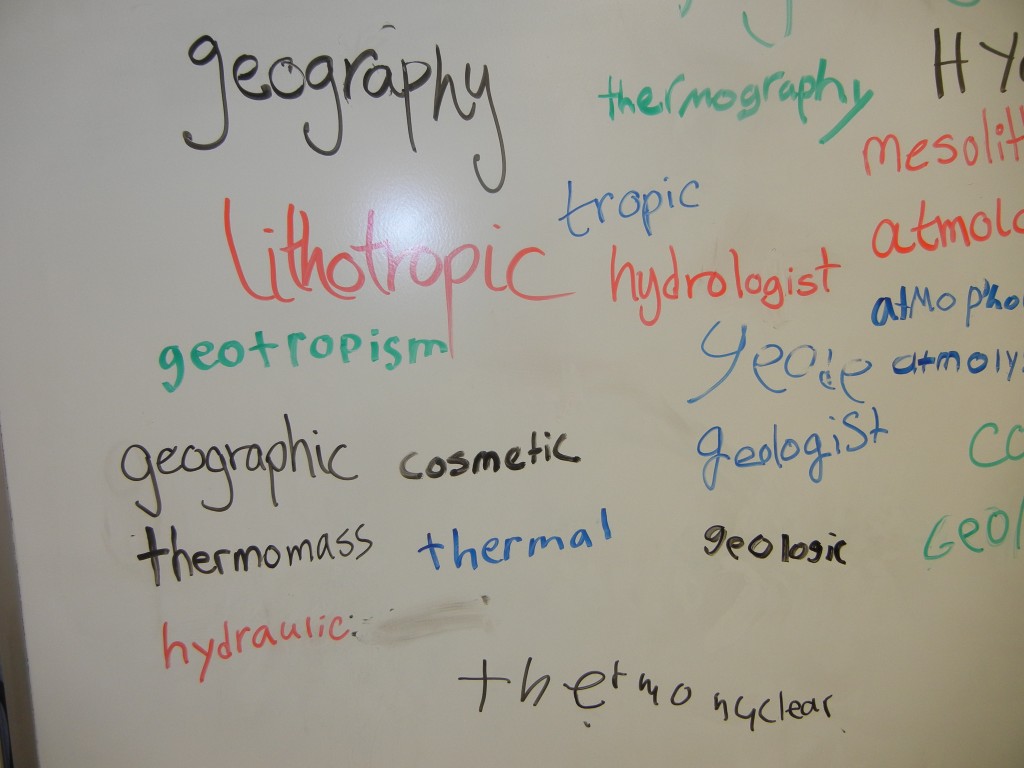 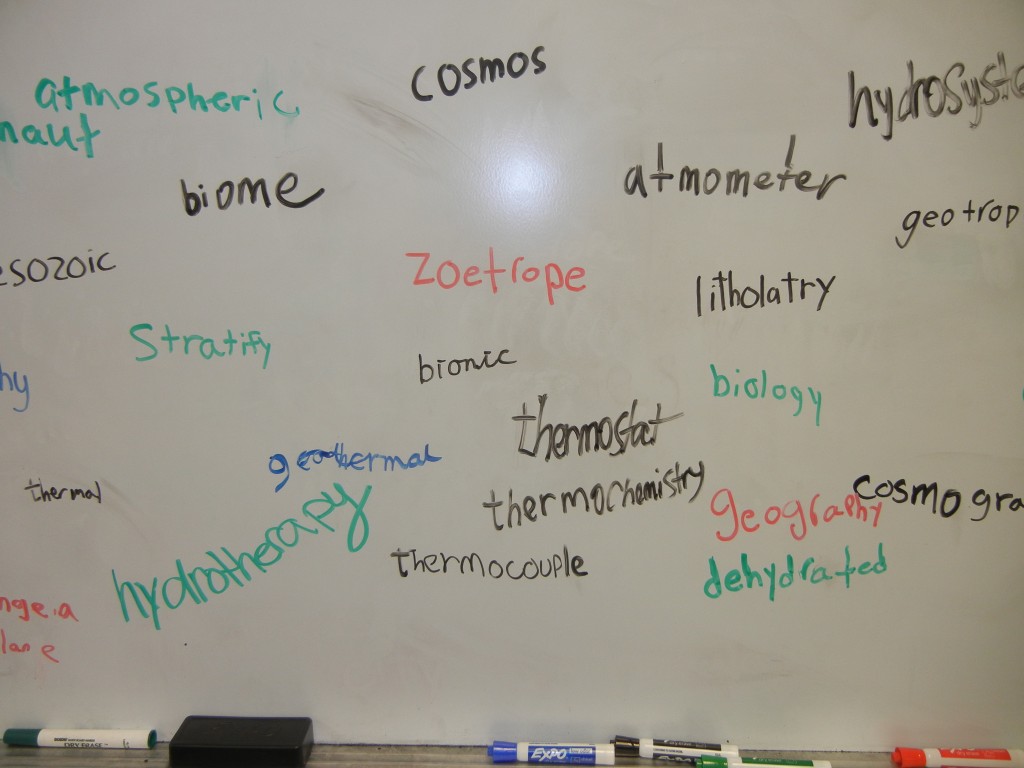 I am thrilled that these students could put together such an interesting collection so quickly!  I am also thrilled that they are playing with what they understand about the structure of words!  But I also know that structure is only half of it.  A word’s meaning is always echoing, even if faintly, the denotation of the base.  If the word is structurally sound and if the denotation of the base/bases is represented in the definition, then we have to see how the word is used by people.  Ultimately, that will decide how productive the word is.

For example, one of the words suggested by a student was <lithotrope>.  Structurally it is sound.  Its word sum or algorithm is <lith> + <o> + <trope>.  But what does it mean?  The student who offered it quite confidently said it was a turning rock.  “You know, the earth!”

I replied, “I love it!  I have no idea whether that is a word we’ll find anywhere else or not, but I will look for it!”  I put it on my list to verify.  I was pretty sure my student invented it, but I was open to whatever I would find.  Some other words I had on my list were mesographic, mesothermal, geolithic, and geotherapy.

At this point it would be good to mention the TED video I showed my students last week.  Erin McKean is a lexicographer.  She writes dictionaries.  In this video she encourages her viewers to make up new words and she suggests several ways to do just that.  As you might guess, my students were ready to invent new words, and between yesterday and today they did just that without really planning to!  They were delighted!

Today I was prepared to talk about the words on my list plus quite a few of the other words that had been on the board yesterday.

Geotherapy
When I first heard it, I wondered if it wasn’t some sort of mud bath for humans.  Well, I did find it used in that way, but I also found that it could refer to humans correcting a situation within an environment.  Geotherapy is the process of remineralizing the soil in an ecosystem that has suffered a loss.  It is definitely an established word.

Geolithic
While this one sounds impressive as a science word, I could find no evidence of it being currently used, and when different groups of students were asked what it might mean, there was only a shrugging of shoulders and the words, “Earth rock?”  We decided it was not currently in use, and we weren’t sure that it had a place in our science conversations.

Mesothermal
Mesothermal refers to the climate in temperate zones where it is moderately hot and not cold enough for snow to stick to the ground.  We all smiled as we recognized how the denotation of each base gave us a clue to what this word meant!

Mesographic
Another impressive sounding word with an understandable structure, but without a recognized use according to our dictionaries and Google!  The students couldn’t decide precisely how this word would be used, so we appreciated it, and moved on.

Lithotrope
Although we could not find this word in use anywhere, it was one of our favorites.  When I asked students in my other classes if they thought we could refer to the earth as a lithotrope, they paused to think about it, smiled and said, “Sure!  Cool!”

Hydrangea
When we googled images of the hydrangea, students recognized this flower.  It can be white, blue, pink, or even purple.  But what is its connection to water?  Why the <hydr> spelling?  At Etymonline we see that the word <hydrangea> means “water vessel” or “water capsule”.  It is so named because the seed pod is cup-shaped!  Such an interesting detail!

Hydraulics
We had been talking about this word on and off for a week, but I still wasn’t sure the students understood how it involved water.  We watched the following video which really helped.  We imagined the syringes with the colored water as they would look on a large machine, covered in metal and moving specific parts.

Such is a classroom where learning orthography is a way of learning about the world.  What I thought would be a quick 15 minute review of the Greek bases we have been looking at, turned into something more, something fascinating, something satisfying!

4 thoughts on “When A Quick Review Turns Into Something Grand”