We are learning about orthography by jumping right in.  I know, I know.  Some will wonder how I can do that when my students don’t really solidly understand about morphemes, about bases being bound or free, about word sums or even suffixing conventions.  But it is still what we are doing.  Because while we are treading orthographical water, the students will look around and begin noticing things.  Yes, there is a lot of splashing at first.

“Mrs. Steven, it doesn’t really say anything at Etymonline.”
“Let me look with you.  Read it to me and we’ll find the word’s history together.”

So here’s what we did.  This is actually the third year I have started the year with a look at these particular compound words.  As the science teacher, the topics we will begin studying are biosphere, hydrosphere, geosphere, and atmosphere.  As the orthography teacher who was looking to highlight the fact that these words have similar structures, I added a layer of the geosphere (lithosphere) and four layers of the atmosphere (troposphere, mesosphere, thermosphere, and cosmosphere).  Now I had enough words that shared this structure to accommodate students working in groups of two.

To begin with I wrote all of the words on the board and invited the students to notice things such as  similarities or differences in how the words were built.  Right away someone noticed that they all had <sphere> in the word.  Great opportunity to review the difference between a free and bound base, and also to talk about the <ph> representing /f/ – a definite signal that the word is likely from Greek.  Then someone noticed that there was an <o> in front of <sphere> in every word.  Great noticing!  Sometimes an <o> in that position can be a connecting vowel signaling a word from Greek.  Since the <ph> in <sphere> already gave us the same clue, the fact that the <o> could be a connecting vowel was something worth keeping in mind as we researched to find out the structure of the rest of each word.

Once they had a definition for their word, I sent them to Etymonline to see how old the word was, and if there was any evidence to help them determine that first element.  I then circulated to help them see how the information is laid out at that site.  The word <cosmosphere> was not included at Etymonline, so I had the students look in our collection of dictionaries to find a word with the same beginning spelling and meaning that we could find at Etymonline.  It was a great opportunity to demonstrate that we don’t find everything we’re looking for in one source!

As the students and I found the first base in each word, I had them complete the word sum we had started on the board underneath each word. 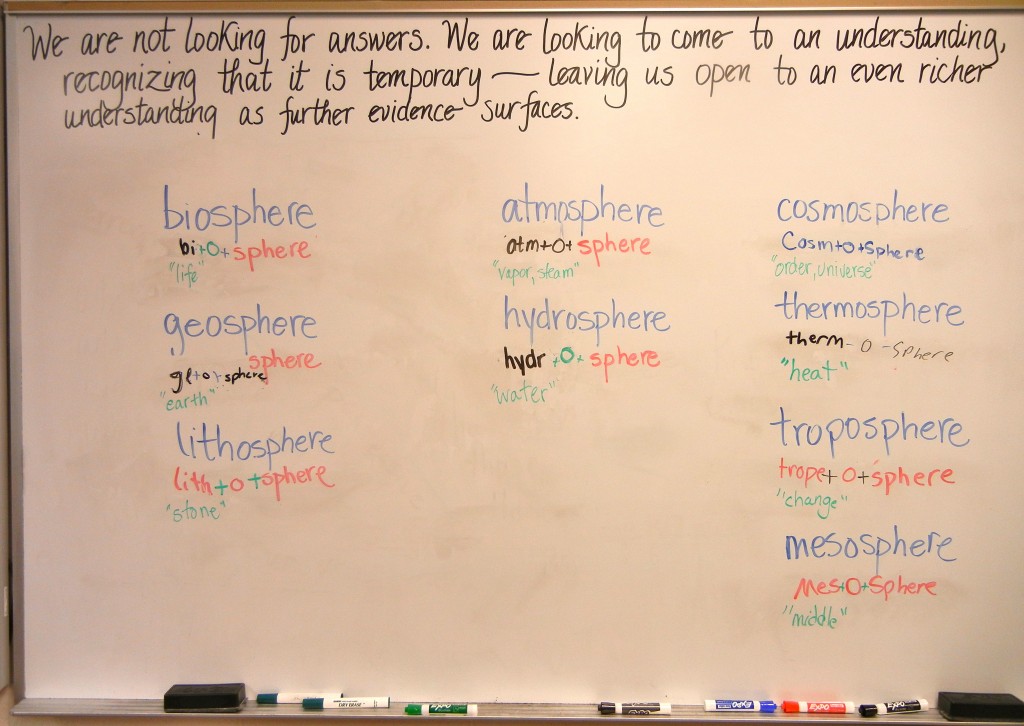 We also added next to each word the Greek word it came from:

Having the completed list of word sums on the board helped the students realize that all of the words were from Greek and each Greek word had the same <-os> suffix.  I explained that we can remove that Greek suffix to find the etymon or root that has become our modern English base.  It was an opportunity to talk about a word’s ancestors as opposed to a word’s modern relatives.  Our evidence clearly shows that the bound base in this word is <bi> and the <o> is a connecting vowel.  Here was another great opportunity to point out that if we just look at the word <biosphere> and recognize the free base <sphere>, it would be easy to assume that the first base is what’s left: <bio>.  But we are learning to be word scientists, and what scientists do is search for evidence to support whether or not their hypothesize is true.  Without evidence, we make no assumptions.  It is better to leave a word unanalyzed than it is to make our best guess at its structure when we have no evidence to back us up.  We can, however, voice our ideas and keep searching for the evidence that will one day support it.

Another great way to provide evidence that the bound base is <bi> and not <bio> is to find a word that has the <bi> but no <o> and comes from the same Greek word bios.  The word the students found was <amphibian>.  The simple fact that the <bi> is not followed by an <o> means that <o> is not part of the base!  What is an amphibian?  It is that which lives two kinds of lives – both on the land and in the water!

So far we have proven that <o> is a connecting vowel in each word on our list, and that like the <ph> representing /f/, it is signaling a word from Greek.  We have also proven that all of these words are compound words and share a structure.  In all but one situation the first base is bound and the second base is free.  Each base has its own denotation.

The next task was to further explore the first base in these words – the base that was less familiar (and in most cases completely unfamiliar).  I asked the students to find a list of words that share that first base.  They found these words by again looking at Etymonline, by looking in hardcover dictionaries, and by looking at Word Searcher online.  I asked them to first choose the words they were familiar with, and then to choose some unfamiliar words, including definitions.  It is so important for my students to understand that they are no longer being asked to make lists of words they don’t understand and can’t use in context.  It isn’t about creating the longest list, but about choosing words for your list that demonstrate a family relationship to each other based on the denotation of the base.  The fun is in finding words that share the base but highlight a connection never noticed before.  An example of this is finding that <dehydrate> and <hydrosphere> share a base and a denotation and belong on the same matrix! 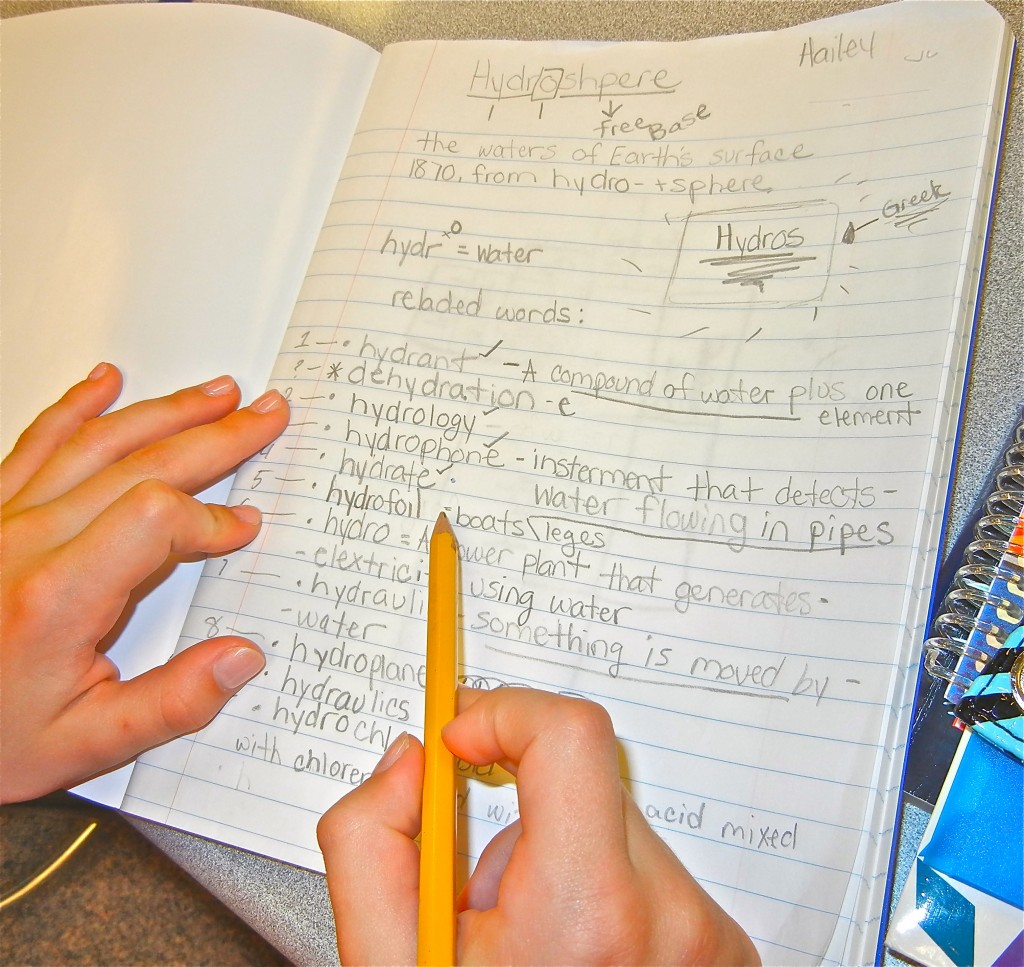 The last thing I asked them to do in their notebook was to write word sums for their list of words, and to then draw a matrix.  I had drawn a few matrices on the board to model this for them a few days earlier, but I knew that now, while they were making their first matrix, is when the understanding of the matrix structure would begin to make sense.  So I circulated, explaining the layout and why certain morphemes would be placed in certain places.

I told them that if we had affixes that we could easily identify, we would pull them off in the matrix, but that we might not fully analyze all words represented on these first matrices.  Then I pointed out a few words such as <biochemistry>.  It was represented in the matrix as <bi> + <o> + <chemistry>.  We agreed that we could probably find out more about the structure of <chemistry>, but that for now we would leave it, focusing instead on the many words that share the bound base <bi>.  If we hadn’t been able to understand what <chemistry> was, then it would have been important to find out more.

Once all these things were in their notebooks and I had glanced at their work, each group fetched a big piece of paper and began a poster.  I wrote this list on the board to remind them of what I expected to see on the poster:

For the next three days, everyone was busy! 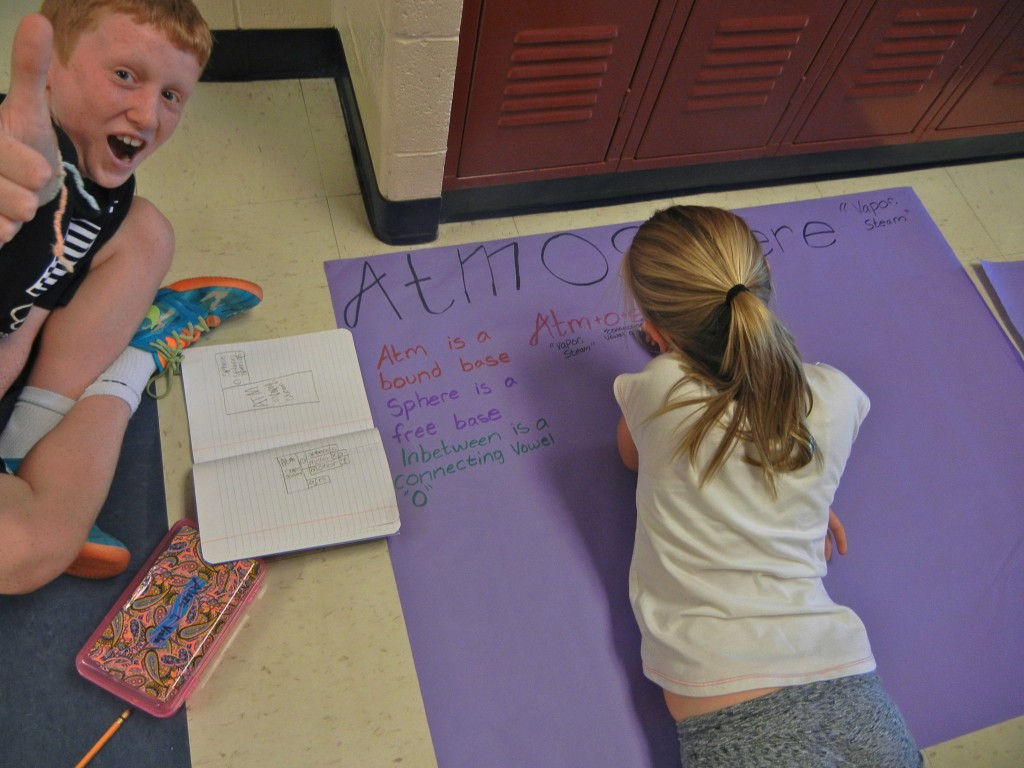 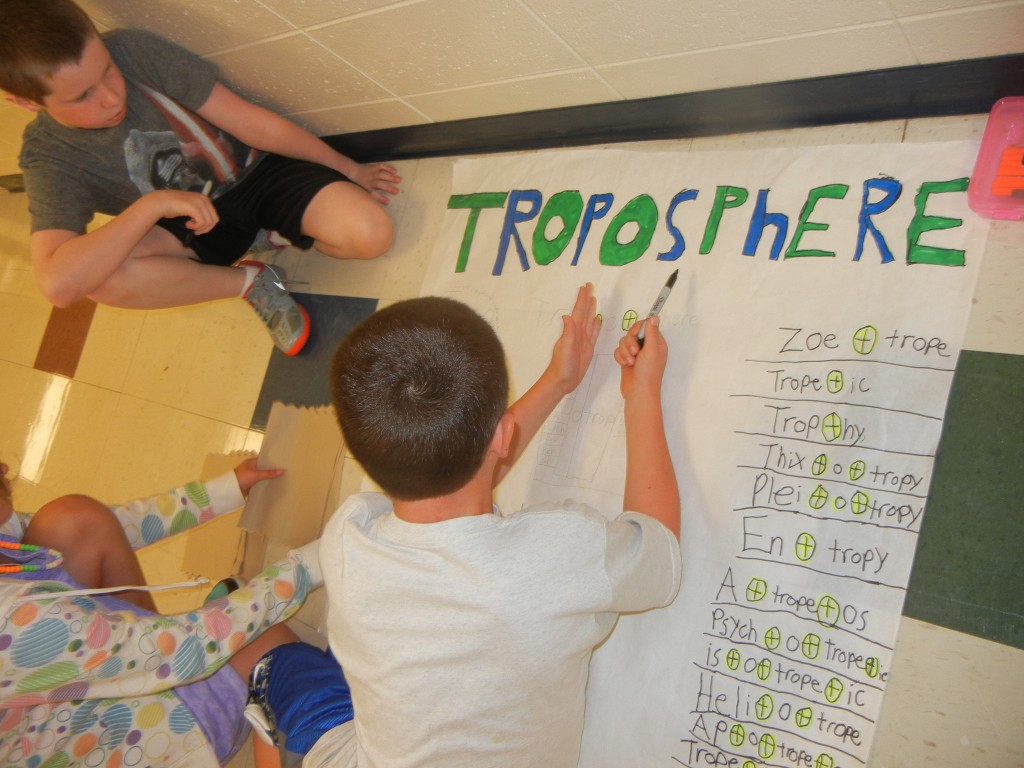 On Thursday we started to share the posters. The students have been surprisingly eager to share!  Explaining their research.  This is where the students begin to feel comfortable, treading in the orthographical water.  It doesn’t take long before the idea that words have structure begins to be an understanding.  Especially as they read the word sums for the words on their list.  Base plus suffix.  Or base plus connecting vowel plus base plus suffix.  Or prefix plus base.  There is structure, and it is consistent.

We talked about the structure of the matrix and identifying suffixes.  How do we prove that certain letters at the end of a word are indeed a suffix?  What other words can we think of that have that same string of letters in that position?  How many suffixes can a word have?  Even with many other things to mention, we kept the overall focus on the relationship between a base and all the other words that share it, and we made mental notes of what we would do different on our next posters as our understanding of all this grew.

This poster sharing is also where I stress that being in the audience is not a passive role.  Everyone brings their chair up to the front of the room.  I expect audience members to relate the base to other words they can think of, to ask questions if anything said is confusing, and to notice things that may not have been noticed or pointed out by the presenters.  Audience participation is where the best, unexpected yet delightful learning takes place for all of us!

So far we have discovered that the difference between a macrocosm and a microcosm is size.  The macrocosm is the bigger universe that encompasses everything, and a microcosm is a smaller world, perhaps it could be life inside a snow globe or a drop of water or an ephemeral pond.  We discovered that a megalith is a very huge rock, and that a megaphone makes a sound bigger.  We already knew about a thermometer and that it measures body heat, but were able to now understand that an atmometer would measure steam or vapor.  We discussed tropisms and acted out the difference between phototropism, geotropism and thigmotropism.  And the students thought it was cool that one of our new bound bases <ge> was in a word with another of our new bases <trope>.  They delighted to find out that the name George shares the base <ge> and that the first George was probably a farmer.  Further delight came when I told them the first name of a retired teacher who comes to our school everyday to take children for walks through the woods out back.  She is the driving force for environmental projects and activities at our school, and her first name is Georgia!  We wondered how her parents knew that it would be the perfect name for her!

With only a third of the posters presented, the learning is already rich and the fascination is ignited. 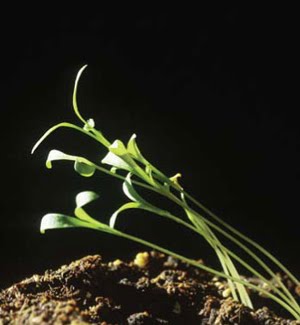 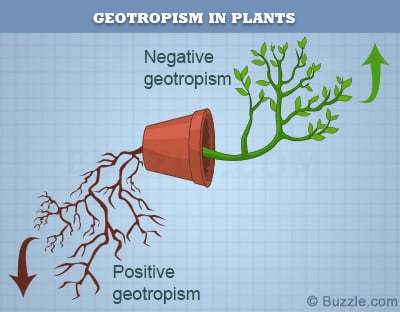 5 thoughts on ““Start Where You Are. Use What You Have. Do What You Can.” ~ Arthur Ashe”