Many people think that if you can pronounce a word and understand what it means, that there is nothing more that matters.  What a mistake!  What about cultivating an enjoyment and fascination of words?

If my students learn enough about words, they are going to see them as connected to other words with the invisible threads of familial relatives.  They will learn about a word’s roots and the fascinating journey it has taken on its way to being a modern English word.  They will learn that from historical events new words emerge, and that even without a major event, new words are entering our language all the time.  They are going to understand a structure they never noticed before by studying word sums.  They’re going to be a bit choosier about words when writing.

In my last post, I shared some of the “word posters” that my students have been working on.  They are on display in the hallway we use most often.  Heads are turning constantly as people walk this hallway.  It is a glorious sight!  But more than that it is an opportunity for my students to look deeper into a word.  Deeper than just its modern day definition and spelling.  It’s been an opportunity for my students to connect a present day spelling to a word’s roots, relatives and past spellings.  They’ve found out that not all words were born at the same time, nor in the same language! 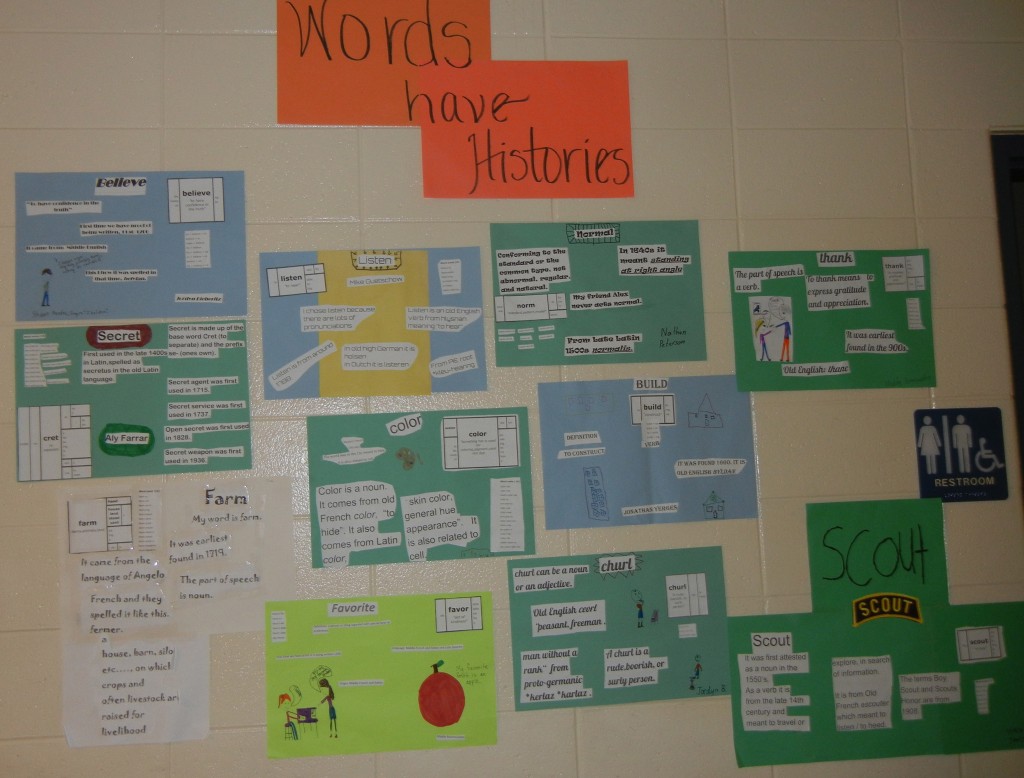 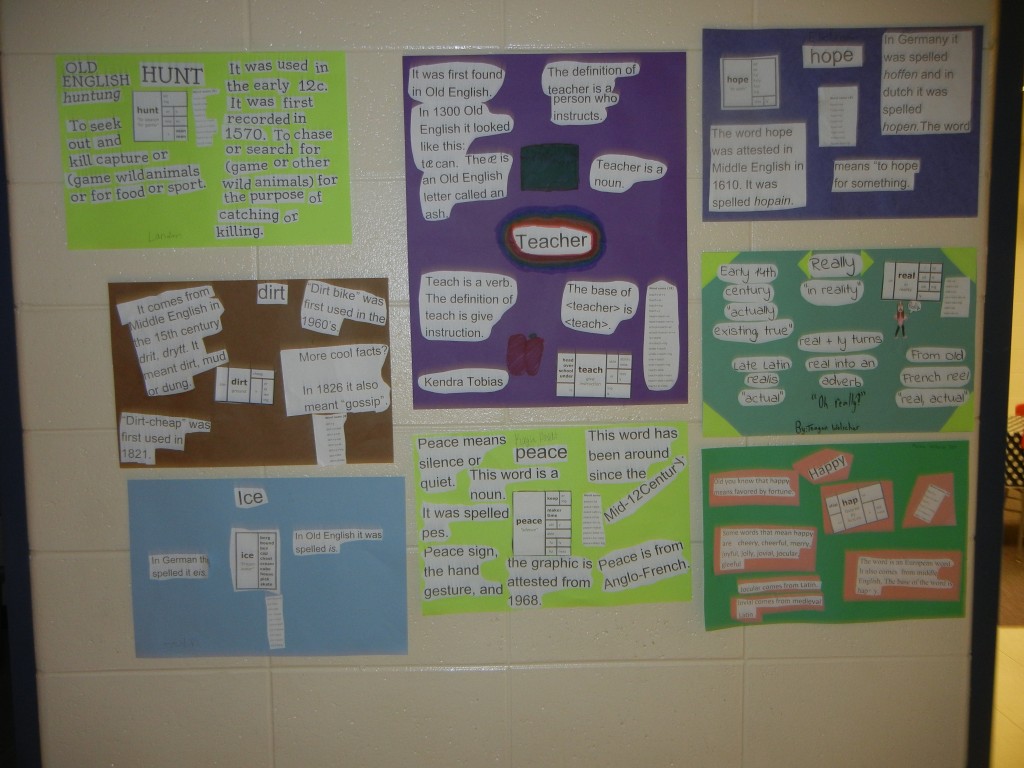 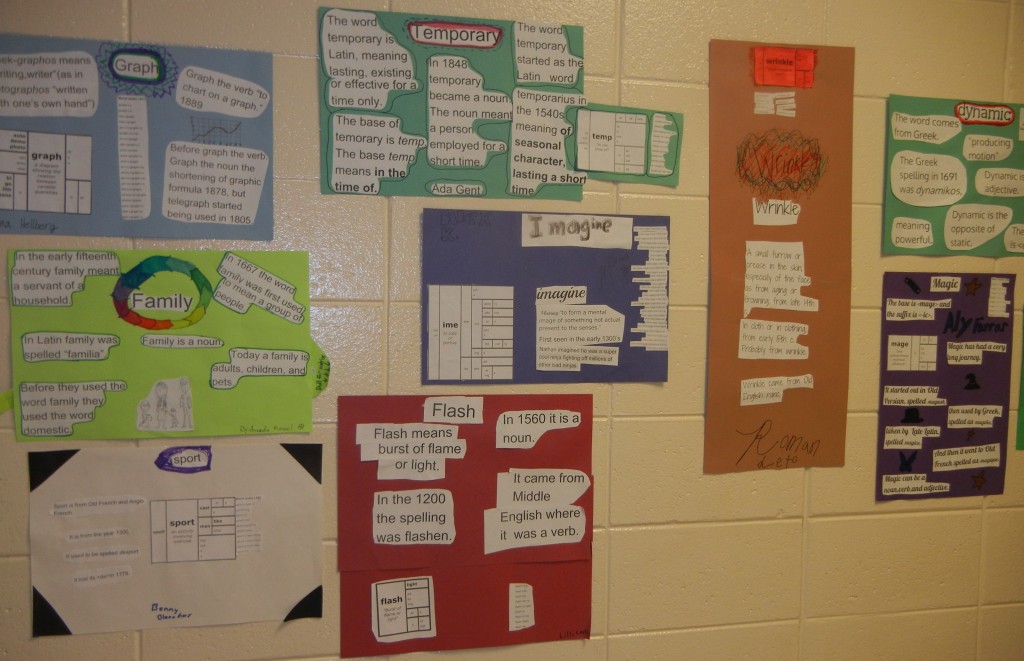 Some of the words chosen were free bases, and some were not.  In order to collect words for a matrix, this had to be determined right away.  Kaeleb had a rather enjoyable journey finding out about the base of <computer>!  Before he went to any resources, he hypothesized that <er> was a suffix.  His reasoning was that he could easily use the word <compute> in a sentence.  As he began his research at Etymonline, he found that <com> was a prefix meaning “with” and the base was from the Latin root putare meaning “to reckon”, originally “to prune”.  I shared with Kaeleb what I knew about the Latin infinitive suffix -are.  That helped him identify the modern base to be <pute>.

I mentioned to Kaeleb that if he typed the Latin root putare in the search bar at Etymonline, he would get a list of words that share that root.  Now that he knew the bound base,  he could get busy collecting words and figuring out word sums, so he could create a matrix! 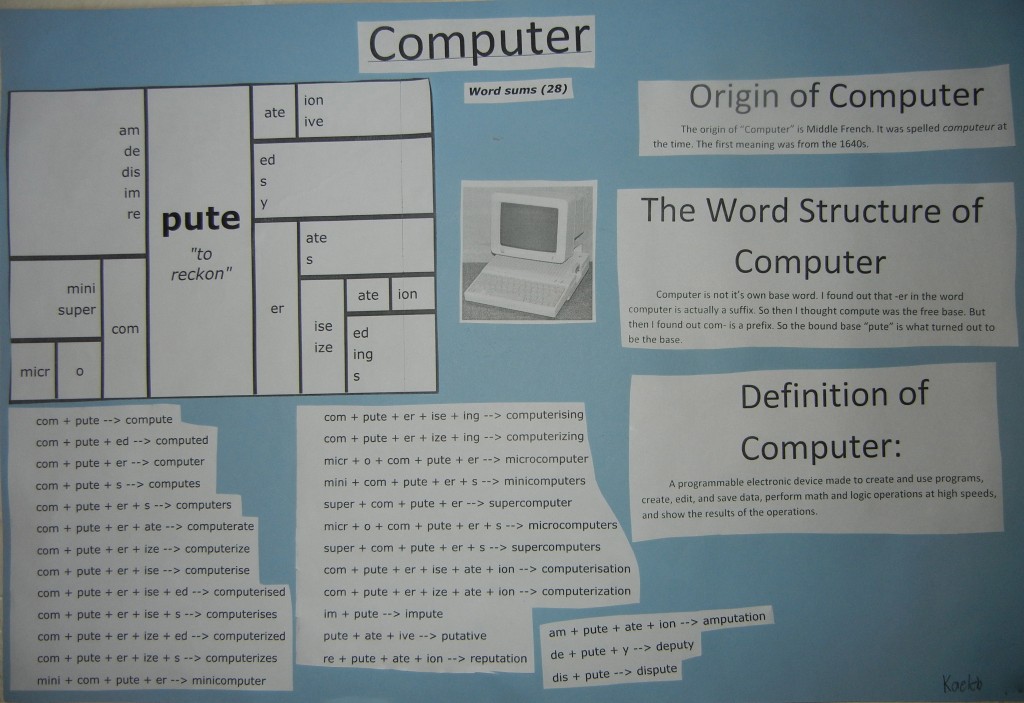 As you can see, he enjoyed identifying a great many members of this word family!  As I was looking over his matrix, my eyes hesitated at the words <amputation> and <deputy>.  This is what I love about pausing to look past the spelling and definition.  Wow!  A connection between computer, amputation and deputy?  Even though Kaeleb explained his understanding of the meaning they shared, I needed to look at the resources for myself.   With the word <amputate>, the prefix <am-> is a clip of the prefix <ambi-> and means “about” and the base <pute> takes on its original meaning “to prune, to trim”.  With the word <deputy>, the prefix is <de-> and means “away” and the bound base is again <pute> meaning “to count, to consider”, literally “to cut, to prune”.  So the deputy is considered as having the full power of an officer, but is one position away from being the sheriff. 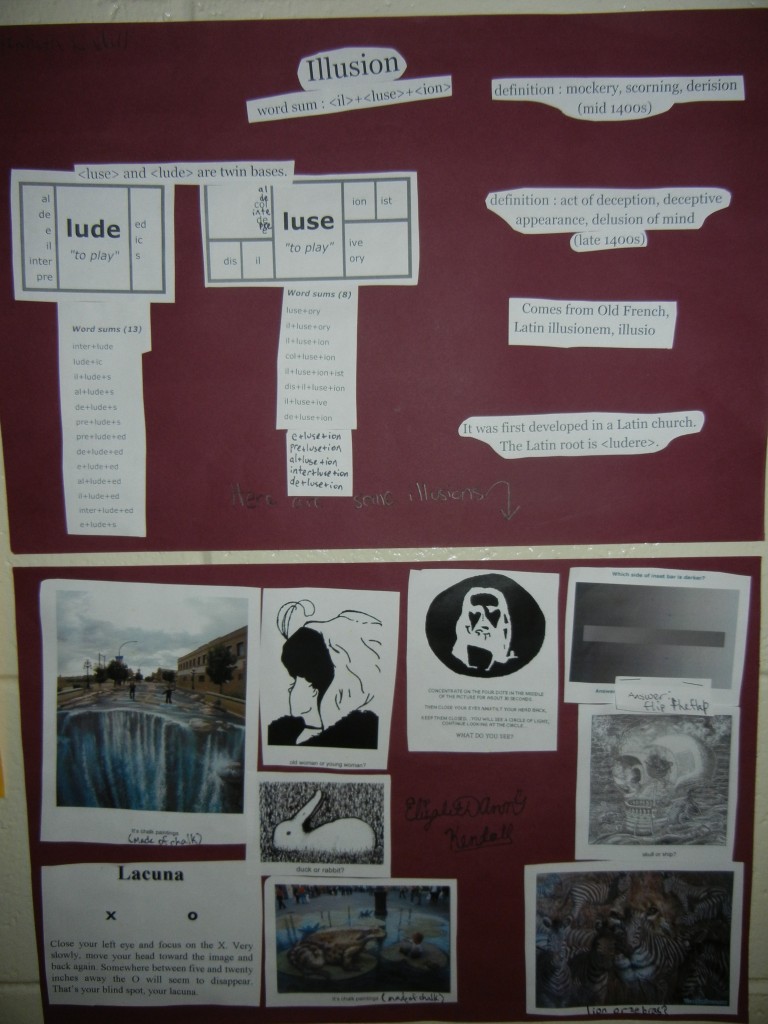 When Elizabeth chose the word <illusion> neither she nor I expected such an interesting study!   She hypothesized that this word had an <-ion> suffix, but didn’t recognize either <illus> or <illuse> as a word.  It was time to look at Etymonline.  We found out that the prefix <il-> is an assimilated form of the prefix <in-> meaning “at or upon”, and that the base comes from the Latin root ludere meaning “to play, to mock, to tease”.  This part was a bit confusing for Elizabeth since the root ludere didn’t share the <lus> that we see in <illusion>.  I immediately recognized the Latin infinitive suffix <-ere> and took Elizabeth to Latdict to see if we weren’t looking at twin bases.  (I haven’t talked about twin bases with my students yet, but when opportunity knocks, I say, “Go for it!”)

At Latdict we found the four principal parts of this Latin verb.  They are ludo, ludere, lusi, lusus.  In order to find out if we have twin bases here, orthographers look at the second and fourth parts.  The second verb part is ludere, and when we remove the infinitive suffix, we have <lud(e)>.  The fourth verb part is lusus, and when we remove the supine suffix, we have <lus(e)>.  These two verb parts are not the same, so we have determined them to be twin bases!  Embracing the idea that there could be such a thing as twin bases, Elizabeth wondered if bases could be triplets!  That led us to asking questions and getting clarification from our favorite Old Grouch in France.   (“He’s not grouchy at all,”  my students quickly discovered.)

After that, Elizabeth went to Etymonline and typed ludere, the Latin root, in the search bar.  That took her to a list of modern words that share that root and have either <lud(e)> or <lus(e)> as their modern base element.  Once she determined the word sums for her collected words (some from Etymonline, some from Word Searcher, some from the dictionaries in our classroom), she created her matrix and recounted her discoveries about the word <illusion>!

Here are a few of the other posters on display in our “Hallway of Word Histories”. 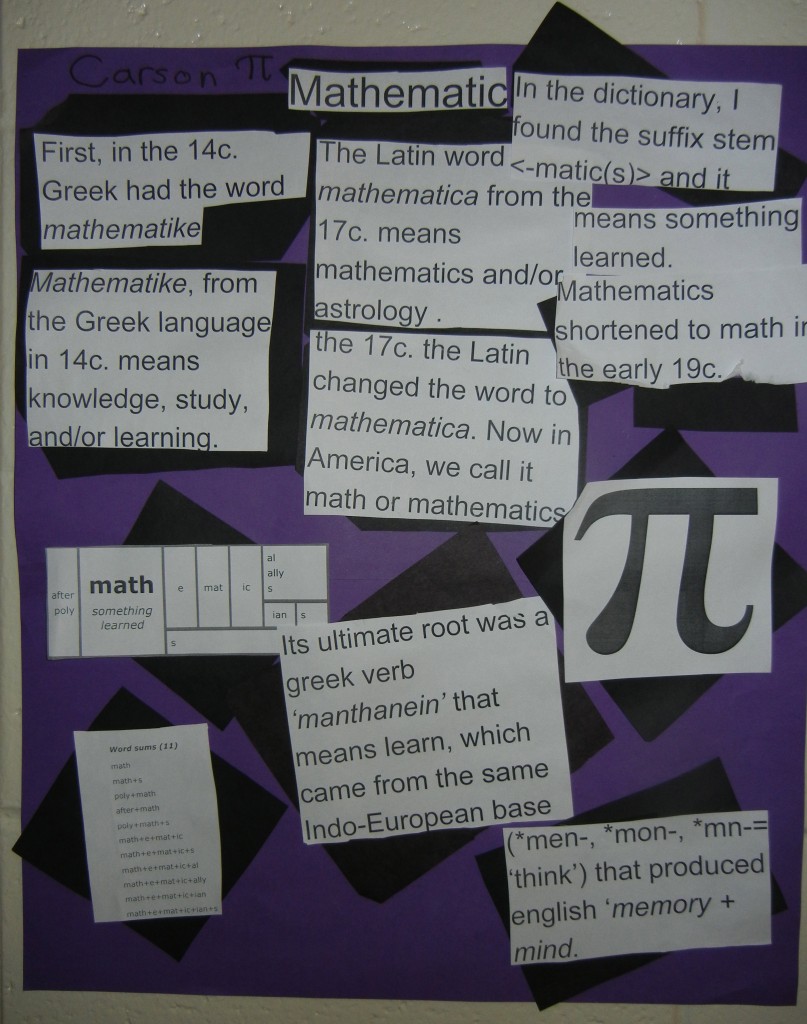 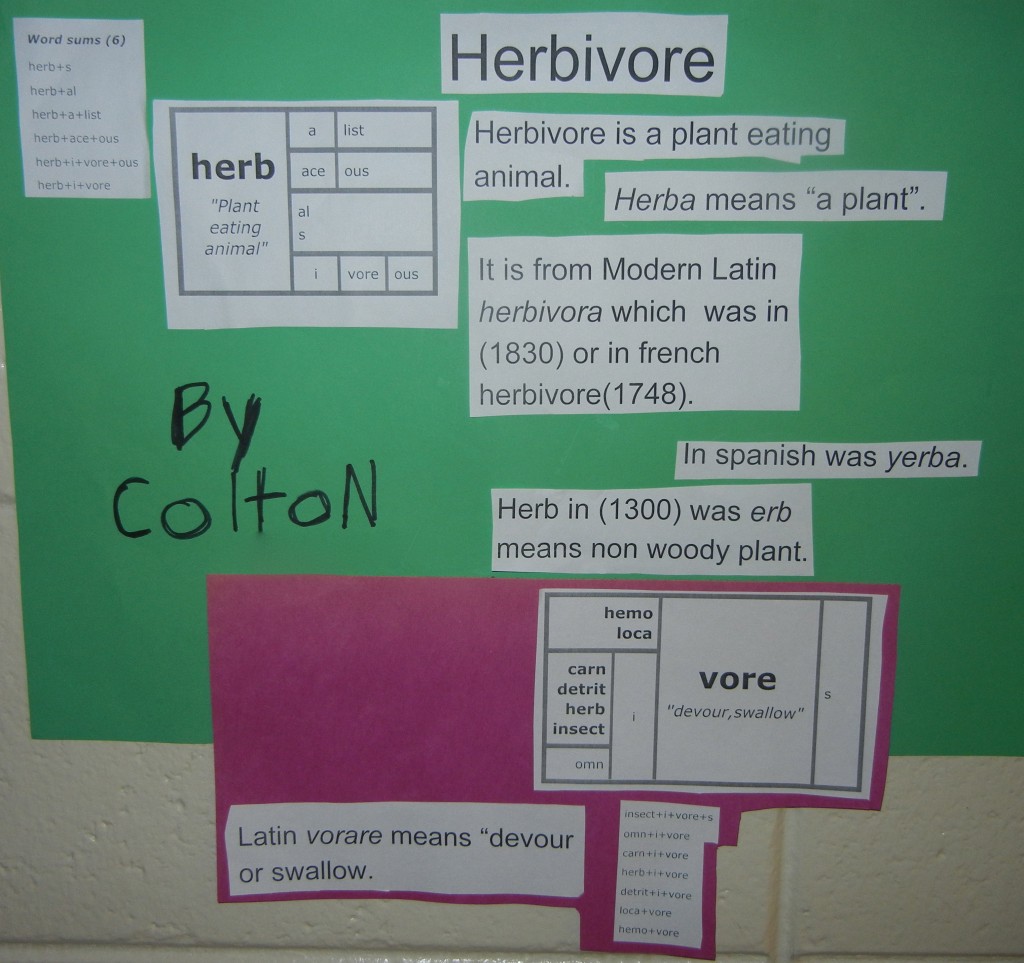 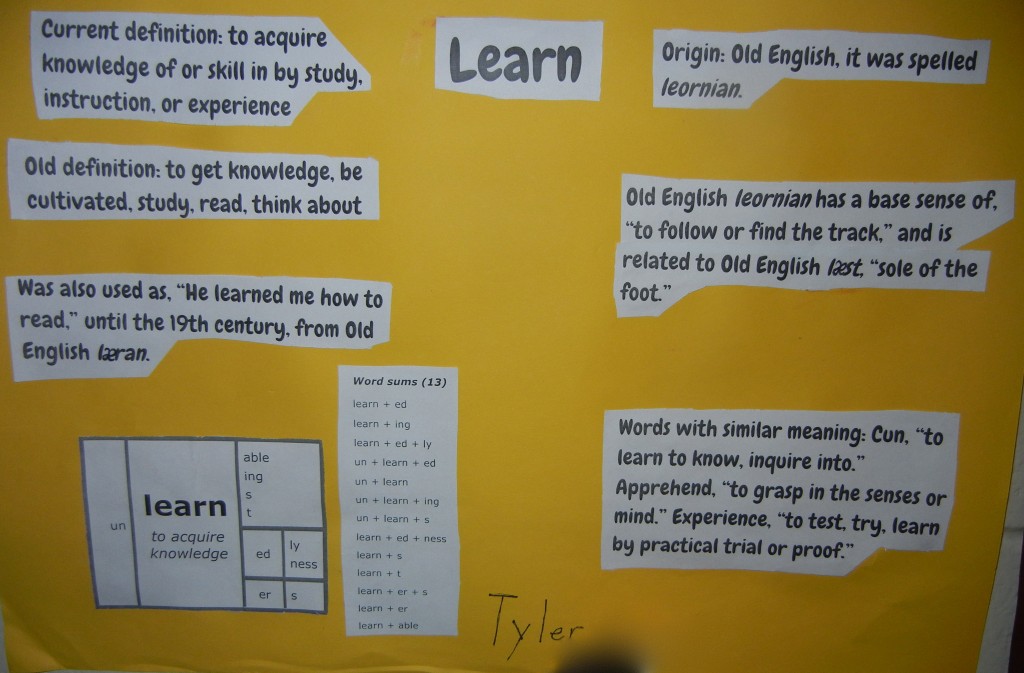 4 thoughts on “Stepping Beyond Pronunciation and Definition…”