When Michael investigated the word <president>, he found that it shared a base with the word <dissident>.  They both come from the Latin root sidere which means “to sit”. 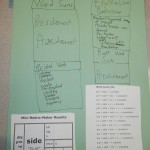 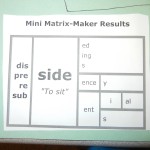 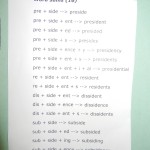 The prefix in <president> is <pre> which means before, so we can think of a president as a person who sits before the people he/she represents.

The prefix in <dissident> is <dis> which means away, so we can think of a dissident as a person whose ideas sit away from those of others.  The dictionary defines <dissident> as a person who disagrees with an established religious or political system.

Still trying to really understand <dissident> in the same way we understand <president>, I asked the students to look online to find examples of people who were or are considered dissidents.  This is where the understanding deepened.

Names of people we have studied this year, as well as names recognized as having been in the news recently popped up.  Here is a short list of people we recognized who have  been named dissidents.  Some were peaceful dissidents, some were not.

Are there names you recognize?  Do you know why they were/are considered dissidents?  Who would you add to this list?

2 thoughts on “What a Difference a Prefix Makes!”